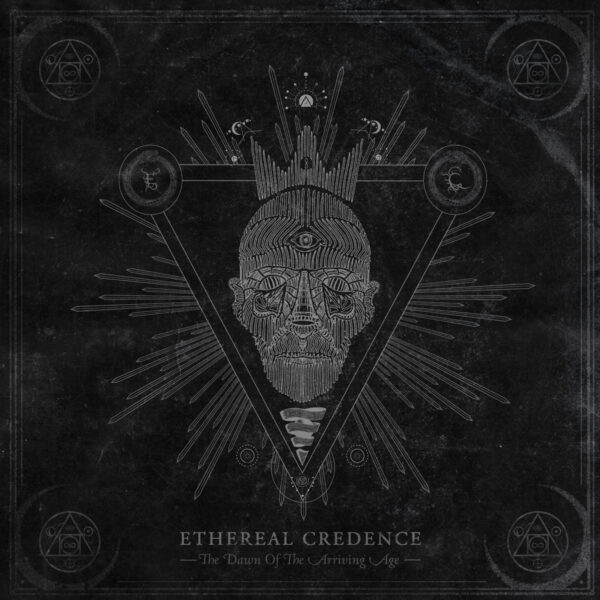 Formed in Alexandria (Egypt) in 2008, Ethereal Credence have only recently released their first album “The Dawn of the Arriving Age”, initially as a digital product and then digitally and in CD format on Via Nocturna, a label specialising in extreme underground metal based in Opole, Poland. Over the past 12 years Ethereal Credence have had line-up changes and at present the band is a trio led by Omar Abou Doma who plays all strings (and who designed the band’s logo and the artwork for the album as well) with Sammy Sayed on vocals and Amir El Saidi on drums. Yes, we could say this indeed is the dawn of a band that’s taken 12 years in its arrival! EC’s inspirations are based around what the band members call the cosmic elements of nature, with songs expressing and exploring concepts of duality, and the transformational lessons that can arise from such exploration.

On “The Dawn …” the musicians play a very clear melodic and technical style of black metal with some Middle Eastern folk and post-metal influences. Some songs like “Uniting the Separate Dreams” have enough catchy riffs, melodies and folk exotica that they become BM rock / pop. Those black metal fans who can remember a world before the Internet or the year 2000 might find this recording a little reminiscent of Norwegian band Ved Buens Ende who released just one album “Written in Waters” in 1995 before that act split up and its members went their separate ways: “Written in Waters” had a similar mix of folk, more melodic BM and post-BM, and an element of what we may call dark urban blues. “The Dawn …” is much less eccentric and individual than the VBE album, constructed as it is around a narrative of its protagonist’s life journey, the lessons he has to learn and how he is able to reconcile with his past and take control of his destiny as a result. Of course this means listeners need to stay with songs that are mostly straightforward melodic old-school BM with brief forays into a parallel folk / blues-influenced world in their second halves.

The album hits an early peak and stays there, the trio concentrating on whipping up a storm with a mix of blast-beat drumming and machine percussion, lots of noisy guitar shredding and earnest BM-style harsh vocals that get bogged down in dense lyrics. The core BM style and the folk music are not as well integrated as they could be, though the music going from one genre to the other and back again could be the intention. The guitar work is good and consistent throughout though most songs are not distinctive from one another. It’s only with the last few songs, starting with the title track, that there’s much drama in the music, especially in the clean (and in the last track, operatic) singing. The BM singing however continues on its usual even-keel declamation, not registering much emotion, and this is a significant weakness in an album based around a concept that needs drama and emotional intensity, and probably a few moments of quiet keyboard-generated ambience or gentle acoustic guitar melody to vary the mood and hang onto listeners’ attention.

The musicians do play very solid technical BM with plenty of energy and enthusiasm to spare. If they can maintain a stable line-up and continue playing together, experimenting with their music and adding new folk and other non-BM elements to it, composing more songs and putting out more releases, singles and other short works as well as albums, they will find their own individual style.