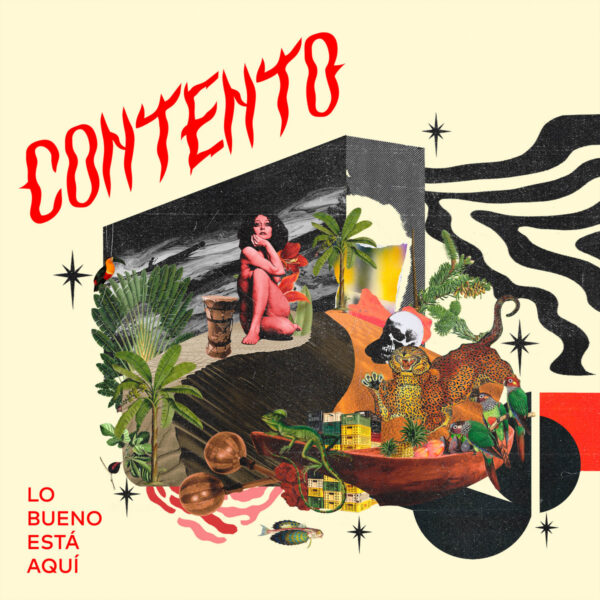 Labelled by its creators as “salsapunk”, here comes a fun album of light minimalist lo-fi salsa dance music made with whatever instruments and electronics the Contento men had at hand at home and in their recording studios. Contento is two Colombian expats Sebastian Hoyos and Paulo Olarte who moved to Barcelona and Geneva respectively and independently of each other, meeting in Berlin in 2011 and discovering a mutual love of salsa. Keeping in contact, they were only able to come together in 2016 to discuss and work out ideas for their new Contento project, and “Lo Bueno Está Aquí” is the result.

The music does sound retro and a bit conventional, and I must say that, as it is coming from two musicians working with a limited number of acoustic and electric instruments, and using drum machines and synthesisers as well, the overall sound isn’t as full-bodied, spontaneous and raw as fans of salsa might expect. Instead the flat electronic sound gives the music a mischievous elfin quality, as though cheeky little sprites already in the instruments at last have been given an opportunity to swarm over the songs and work their deviant little charms into the beats, rhythms and melodies. Inevitably given their nature, the sprites end up taking over the music and turning it into something insane. There seems to be a very knowing attitude here that the limitations of the instruments and methods used to record the music would result in a less than authentic salsa sound and so these limitations are parlayed into the music’s distinct characteristics and strengths.

All songs are short and most don’t amount to much more than layers of rhythm, melody loops and beats with lyrics sung or chanted over the top. Tracks like “De Todas Maneras” and “Pelo Negro” (a whimsical Latino EDM cover of the Led Zeppelin song “Black Dog”, the lyrics of which are faithfully rendered in a style that satirises their sexualised posturing) are very cute in their unrelenting demented electronic miniature-space-alien way as they play in some far-off interstellar nightclub catering for little green men and women (and any others in-between) sipping fizzy cocktails that pack tiny punches. Those space aliens certainly are impressed with the beings they observe on Earth, even if their attempts to portray human behaviours inevitably fall flat because the motivations and emotions behind them happen to be beyond the aliens’ realm of understanding and awareness. A few, like “Las Gotas”, do end up overstaying their welcome with clunky repetition of music and vocal loops.

The album works best in a song like “Pelo Negro” that sends up its inspiration in a delightfully witty manner and in others where listeners can easily imagine an orchestra of tiny animated machines reproducing salsa music for audiences more at home in the digital cybersphere than in the sweaty clubs, dancehalls and outdoor concerts where salsa originated. “Lo Bueno Está Aquí” may end up as a cult classic of a kind, born at and for a particular moment in a historical / cultural context that needed such music like it, with the restraints and limitations the musicians themselves had to undergo to make it.