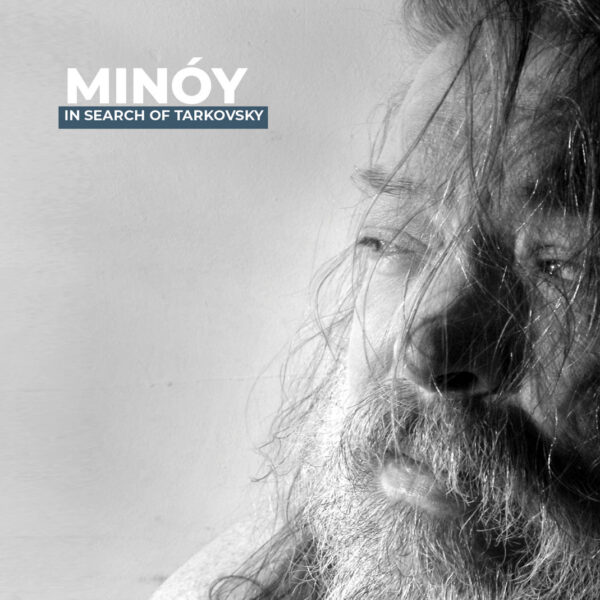 In Search Of Tarkovsky (COLD SPRING RECORDS CSR273CD) is a 1986 cassette by Minóy, rescued and reissued in CD form by Cold Spring with new cover art. This one is bound to tick a lot of boxes for collectors and noise fans alike and I’m finding it’s growing on me with every spin… Minóy was the Californian creator Stanley Keith Bowsza whose name is entirely new to me, but he was a prolific experimental cassette mail-out hero in the 1980s and 1990s, and a quick scan of Discogs reveals about 80 albums to his name, most of them originally released on his own Minóy Cassetteworks label. It’s also great that he sent tapes to, and collaborated with, Al Margolis, Zan Hoffman, and Agog, three personal faves of mine in this area, all of whom could likewise benefit from a reissue programme for some of their more obscure cassettes.

Speaking of reissues, it seems this CD is the first time any one of Minóy’s titles has been republished in this form, although there is a Bandcamp page where nearly 40 albums from his catalogue can be streamed. Described in the press notes here as “DIY noise music” and “engrossing, beautiful and imaginative work-of-art album”, In Search Of Tarkovsky is a lovely piece of maximalist, layered, drifting and droney sound-sculpting, with plenty of weird tape treatments, echoes, and distorted wailing voices, all adding up to an ingenious and highly mysterious piece of surreal, bewitching, nightmarishness. On the strength of this one record, I’m prepared to believe that Stanley Keith Bowsza took a very personal and individual approach to constructing his music, fuelled by his own convictions and singular visions. He’s also found a way to imbue his music with poignancy, emotional content that’s hard to pin down, and he’s not just toying with processes for the sake of watching the tape spools endlessly rotate in the studio. All of this may be what gives this record a real stamp of originality; it’s certainly not power-electronic styled noise, and there’s a real lyrical / romantic quality in operation. The layering methods are especially effective on the second cut, where it manages that delicious sensation of having two competing streams of musical information swimming against the tide while simultaneously being tugged along by it, really sapping one’s sense of reality in a marvellous manner. I suppose the most powerful feature however is how the music just keeps on going, keeps on ploughing away at its own long journey through a darkened psychological tunnel, and the listener can’t help but be swept along by the force of it. Through continuous drone, ebb and flow, loops, and strange collaged elements, a rugged beauty emerges.

As to the connection to Andrei Tarkovsky and his cinema, this isn’t a point I would care to labour at this time, mainly because (a) there’s already been enough said about this visionary film director and his deep, symbol-laden odyssey type films and (b) many other musicians are fond of referencing him too, often in a rather superficial manner. I’ll give Minóy credit because he doesn’t labour the point either; only the first half of this music refers directly to Tarkovsky, while the second suite carries the inspiring title of ‘Memory Undefined (Dream As Truth)’, a phrase which could be taken to sum up some of Tarkovsky’s subtexts, but also has a surrealist ring to it that surely would have pleased René Magritte or Paul Delvaux. I mention the surrealist thing as I am aware this particular “tag” has been attached to Nurse With Wound more than once, and while Minóy’s pained voices here might remind us of parts of the first NWW record, I would claim Minóy is the more interesting artist. Let’s hope this is the first of many Minóy reissues. From 6th April 2020.