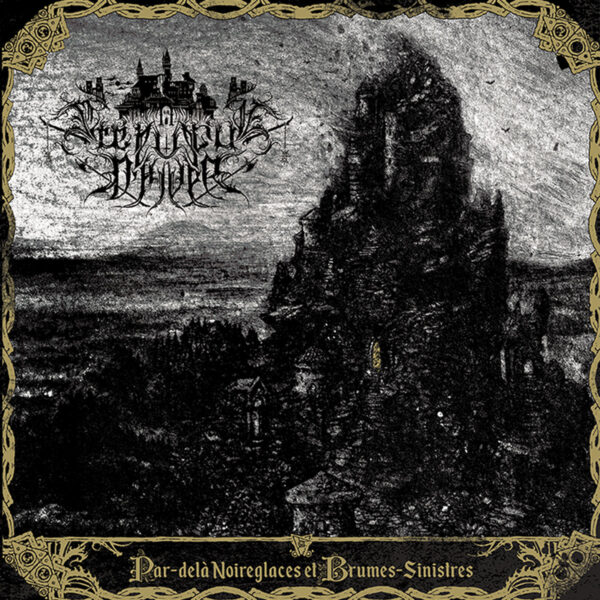 A very curious yet highly individual work of 1990s-era melodic atmospheric black metal combined with dungeon synth (a sub-genre of dark ambient with BM aesthetics and European mediaeval-period themes and musical elements), “Par-Delá Noireglaces et Brumes-Sinistres” is the debut album of mediaeval BM band Crépuscule d’Hiver (in English, “Winter Twilight”), originally founded in 2018 as a solo project by guitarist / vocalist / keyboardist Stuurm who wrote all the songs and lyrics, with drummer / bassist NKLS joining the project in 2019. This album is very ambitious in its scope and style. Quite why many French BM bands idealise a particular period of their nation’s history – the High Middle Ages before the Renaissance – in their music is a mystery to me, and I hazard that escapism for the sake of personal entertainment and that of others is just one of several reasons they do so. One possible reason is that this period was one in which a French identity was established over competing identities, both within the territory that became present-day France and outside; after all, it’s the period during which the French finally kicked out the English enemy from their lands. A second reason is that constructing an idealised fantasy of what France might have been is one way of criticising current conditions in France today, that what the French currently have is and was never inevitable, and that another, better way is possible.

Not all the ambient non-BM music is “authentic” in the sense of being played on actual mediaeval-era instruments or modern replicas of them but it does add a distinctive and rich flavour to Crépuscule d’Hiver’s style. The “mediaeval” music – much of it sounding more 19th or 20th-century synth-generated orchestral than mediaeval but let’s not allow historical accuracy to spoil the fantasy – varies a lot and is used in all songs along with more usual BM structures in their melodies and riffs. The scale of the music is epic and grand, to the extent that listeners easily imagine themselves being back in a France of armies of knights and archers fighting one another, and of lords and ladies entertained by troubadours and travelling actors’ troupes at grand feasts in splendid castles. With help from guest musicians, the band charges through well-written songs with energy and zeal, no matter how naff the whole concept must have seemed at times, and the enthusiasm pours out of each and every song. The energy and fervour flow from one song to the next no matter how long the songs are – and most of them are very lengthy with the title track at the end clocking over 20 minutes in length.

As might be expected, some songs are better than others in achieving a good balanced fusion of old-skool melodic BM and dungeon synth ambience and melody: “Le sang sur ma lame” is an early highlight, a lesson in how a distinctive and exotic world long thought gone forever can be brought back temporarily with particular riffs and their sometimes mournful sounds; and “Tyrans de la tour immaculée”, stuffed to the gills with dense BM riff grind and coldly finicky mediaeval ambient tunes right up to the end, is a mini-soundtrack archive that could have been expanded and hived off into an EP in its own right. “Le souffle de la guerre” features sombre atmospheres and passages of dramatic and thrilling music combining both BM aggression, inspired lead guitar soloing and martial sword-fighting flavour and bombast.

The title track summarises everything that’s gone before, musically and in atmosphere, and has the strengths and weaknesses of previous songs as well as its own in being such a long and winding track densely packed with music featuring a limited palette of instruments and sounds. The Middle-Ages themes and associated music and melodies sound more gimmicky than they should, and for all their layered richness the music lacks the raw organic quality that actual mediaeval-period instruments or replicas of them would give. The result is that the last track sounds flat and tinny in parts. Editing for length would not change the title track much – the coda just seems to go on and on forever, and the term “self-indulgence” almost threatens to be an understatement here. The vocals are not the album’s strongest point: the rasping BM vocals can’t quite compete with the music for drama and intensity, and the clean female backing vocals are too cloying and doll-like for the music’s martial nature and themes.

I confess to feeling relieved when the album ends even though much of it is a fun ride through an idealised fantasy of a period when knights and soldiers fought according to supposedly strict rules and codes, and life was much less rushed, less complicated and above all less machine-like than it is today. While technically this is a very polished and carefully crafted work, relying on a limited set of instruments to flesh out a nostalgia for a historical past with all its complexity leads it onto a path on which detail and repetitive, monotonous grandeur dominate over atmosphere and the spirit of a proud and war-like France of several hundred years ago.