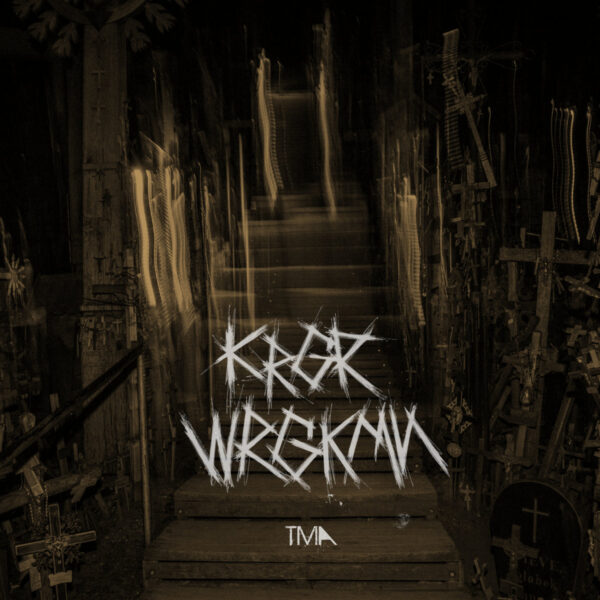 Fairly grim noise-rock-plod grinderoo from Kragrowargkomn on the album TMA (URBSOUNDS URB048) from Urbsounds…recorded in Slovakia and carrying sleeve design, typography and colour scheme that edges it somewhat towards the Black Metal camp, though music is not quite in that genre. Think more a kind of industrial-tinged gloom thing, the heavy sound filled out with plenty of messy percussion, clonking beats, drum machine, synth, and a fuzzed-up bass guitar with many deltoid muscles that just won’t quit, or at any rate won’t stop chuntering and complaining in repetitive monotones. Now I look closer the brown murky of the cover reveals many crucifixes, in some cases piled up in abundance as though heaped on a discard pile and awaiting the bulldozer that pushes them towards the final religious dumping ground…

Kragrowargkomn might be one chap doing everything and I can’t find out much about him, so he’s probably a mysterious sort; he may have contributed his visual art skills to two records under his G# alias for the Nomad Sky Diaries label in his part of the world. Little explanatory text given for this release, except to let us know that the “darkness” is an undoubted subtext… “abstract phenomena such as darkness or void are here and known to us, but we can never really perceive them,” is all he will tell us. “There is plenty of space for creeping doom rumbling, industrial bustle, and black metal dissonance,” appears to be his way of summing up the musical content in a pithy profile. Couple of guest musicians do appear, one of them being murmer on the long title track ‘TMA’, which surprises me as old McGinley used to be such a quiet and unassuming field recording type, but that was in 2004. The other player is drummer El Muflono who cracks his sticks on two tracks midway through album.

These contributions aside, we mostly have a glimpse through the cracked skull bone into the teeming brain of Kraggers, and his largely pessimistic view of the world. He renders it with minor key settings, a slow and leaden pace for each instrumental, agonised and pained guitar solos, and a very deliberate manner of playing everything; each tune has form, shape, dynamics and progress even, but one feels constantly entrapped by the airless, pedantic performative skills of Mr Wargkomn. However, it’s these very qualities which makes TMA the cathartic listen that it is, and Kragrowargkomn’s signature style is extremely distinctive, just right for the job at hand, along with his obstinate determination to blend dark ambient with funeral doom and industrial music.

Brutally simple in form, yet not so thuggish that the whole records hits you in the face like a mad rhinoceros… with his do-or-die attitude, Kragrowargkomn reminds me of that X-Men villain The Juggernaut, except that he moves a lot slower. While I’d like to hear some more cold ambient tones on the next one, just for a bit more light and shade, this is a very promising debut release. Arrived 4th May 2020.