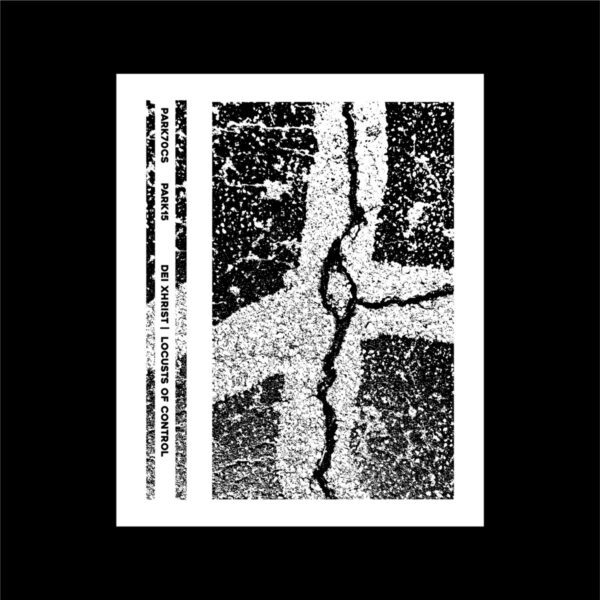 Californian-born artist Dei Xhrist has been working as a multidisciplinary artist in sound, performance and sculpture since 2006 but to date has had only three solo album releases though she has appeared on compilations. Initially performing with multiple record players spinning loops and lock grooves, she moved on to other instruments and recording methods to create audio cut-ups and soundscapes and added voice later. Dei Xhrist’s voice has now become her predominant instrument which she deploys in graceful ways on her third major recording “Locusts of Control”. The three tracks recorded over a period from 2016 to 2020, not necessarily continuously, include live vocal improvisations, field recordings of insects and highway ambience, and live performance recordings. Instruments used include effects pedals and all tracks were recorded on Apple iPhone 5 and 5SE smartphones.

Dei Xhrist has been compared to fellow Californian native Diamanda Galas in the past and I presume this due to her use of glossolalia (speaking or singing in multiple languages) and sometimes an operatic style of singing, though Dei Xhrist is not so aggressive in using her voice as a weapon. Her vocal performances give the impression of the singer being possessed by spirits of unearthly powers. On the title track Dei Xhrist’s voice writhes under echo and a distorted remix of a live outdoor performance at a zoo with a percussive rhythm from a field recording made by the artist while travelling on a highway in Ottawa. The entire track has a murky spooky atmosphere though Dei Xhrist’s distant ethereal singing benefits from a clear production. As the track continues (it’s 30 minutes long), the singing becomes more prominent in the mix and the entire soundscape has the nature of a ritual in progress with Dei Xhrist appearing to be in a trance while chanting and her voices in the background forming a ghostly choir. Hissy effects that flow and ebb add a sinister serpentine edge to the performance.

The second side of the cassette features two tracks “I Don’t Owe You Anything” and “Sorry Not Sorry”. The first of the two, “I Don’t Owe …” is dominated by a distorted vocal performance of howling drone voice with a sub-bass drone in support. The singing sounds drunken and Dei Xhrist performs like someone whose senses have abandoned her to a lonely, anguished fate. The harrowing nature of the singing is counterbalanced by the calm restrained minimalist noise drone which at times threatens to erupt into a raging noise scythe. “Sorry Not Sorry”, which the singer herself claims she was singing from “a happy place”, certainly sounds a bit doleful and dirge-like as Dei Xhrist exercises superb control and timing while singing almost entirely without accompaniment. Later in the track multi-tracked voices and droning effects add dark mystery, atmosphere and depth.

Dei Xhrist has a great vocal talent though for all the exposure it gets on this recording I suspect what I’ve heard on “Locusts of Control” is a small part of what she is capable of. (For an example of how far she can push her singing, I suggest TSP readers listen to an earlier solo recording “The View From My Shoulders Is Fine”.) Listeners might grumble that the title track on “Locusts …” really is too long and could have been edited without any effect on the track’s immersive nature – it does coast along at an even keel for most of its length – but then as Dei Xhrist would say, she doesn’t owe us anything and she’s not sorry. The low-key, quietly noisy nature of the dark and mildly sinister soundscapes makes them a good foil for Dei Xhrist’s pure-toned vocals.