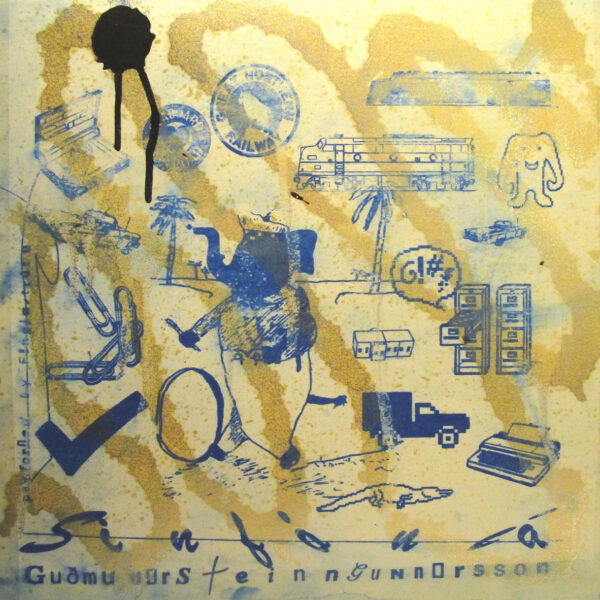 Very welcome return of the Icelandic composer Gudmundur Steinn Gunnarsson with his new record Sinfónía (CARRIER 046), released through Carrier Records in New York. We last heard from this very distinctive and unusual talent in July 2019, with two releases on his own Traktorinn label with hand-made covers by Sam Rees. Today’s release continues the association with that visual artist, about whom more shortly.

The music is all-acoustic this time around, not far apart from the 2019 Vorlag/Sumarlag item with its flutes and recorders, but Gunnarsson is now working with a small ensemble of players who go by the name of Fengjastrútur. Nine musicians in all, playing flute, ocarinas, recorders, percussion, stringed instruments, the samba whistle, and the microtonal harmonica. All recorded on a single day in the studio, working with the engineer and co-producer Jesper Pedersen; the notes remind us that this was the line-up of Fengjastrútur on this particular day, implying that membership is fluid and it might change one day to the next. There are four pieces each around 7-8 minutes in length, and the music is beautiful. To begin with there’s the same “open” and very diffuse feel we heard on the earlier records, creating the impression of a pleasant meadow or field in which the listener is free to wander. It’s not unstructured or chaotic, but the logic of the organisation is organic and free-spirited; and there’s an endearing gentleness to the music, with none of the players insisting on their performative skills or over-emphasising the sounds of their instruments. It helps that the instrumentation is rather eccentric to begin with; with so many whistling sounds and rattling percussive elements, it’s not far apart from a children’s musical workshop – a remark which, let me stress, is intended as a compliment. The music has that sense of wonder, of child-like discovery, rather than someone delivering a musical lecture in stern, didactic manner.

The group is described as “close-knit”, which makes Fengjastrútur seem like a happy family, and it seems Gudmundur Steinn Gunnarsson has been working with them for some time. They may be something to do with a local art collective in Reykjavik, called S.L.A.T.U.R.; according to the notes I have before me, this group did much in the way of musical performance, sometimes with a semi-theatrical visual side, and used home-made or prepared instruments. The growth of this group is not unrelated to the 2008 financial crisis when three of the major commercial banks in Iceland had to default; one outcome was lower house prices in Reykjavik, and an influx of artists into this affordable accommodation. Where many artists are gathered together, culture is likely to thrive; it seems to have done so here. Those concerned brought a certain kind of dynamic to their art, interacting with a time when everyone was very angry and life looked uncertain (to put it mildly). While I wouldn’t go so far to call it “an entirely new civilisation” as the press note does, I have utmost respect for these radical experimental practices. The music itself, as noted, is quite gentle and doesn’t appear to be fuelled by angry emotional states at all, and while it may depict or create ambiguous states of mind, it doesn’t add to the general uncertainty by wallowing in self-pity. The story is an inspiring one of artistic growth and rebirth, hopefully bringing new life to that part of the world; let’s pray that other nations, cultures, and artist communities can fare as well after the current pandemic crisis. Such a renaissance need not require government spending; Fengjastrútur, and Gunnarsson, are living proof that people-power is highly effective.

I have before me a CDR copy with a cover hand-made by Sam Rees; indeed the note from the composer describes the project as “another one of my collaborations with Sam Rees”. The stamped cover artwork is picked up on a paper bag in which it’s all packaged. Every copy is unique in the 40-CDR run; Rees works with hand-printing, and an obsolete stencil device that’s 40 years old, and he delights in chance effects produced by “smudgy” ink. Last time around I guessed that he doesn’t use computer fonts, but it turns out he does; he’s written his own code that generates fonts in a random manner, and runs this on – you guessed it – an obsolete computer, thus generating strange and exciting typographical effects (even if it is at the expense of legibility!). There was a vinyl edition of 10 copies which is sold out at time of writing. In all, a total joy which restores my faith in the power of art and the ability of human beings to keep on making it, against the odds. From 4th May 2020.