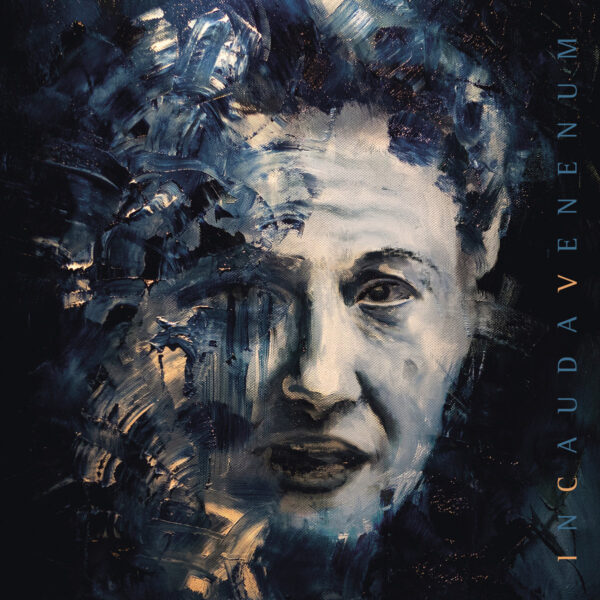 Available in three physical formats as well as digitally is this second album by Lyon-based post-black metal band In Cauda Venenum, first formed as a solo project in 2010 by Ictus and later expanding to a duo in 2012 with drummer N.K.L.S. Astonishingly there are two metal bands in Lyon, France, called In Cauda Venenum; mercifully, or maybe not, the other In Cauda Venenum is a death metal band. What makes this post-BM In Cauda Venenum stand out from the other ICV and indeed most other BM and post-BM bands is the duo’s reliance on guest musicians playing cello, piano and double bass, the combination of which adds a highly emotional and rousing dimension to ICV’s punishing music. The inspiration for the album may be unusual for post-BM: “G.O.H.E.” refers to the mother of famous US crime writer James Ellroy. Geneva Odelia Hilliker Ellroy was raped and murdered in 1958, three months after 10-year-old James apparently cursed her to death – in a way, not surprising as his parents were divorced, Geneva Ellroy was apparently bad-tempered, alcoholic, sexually promiscuous and unable to hold down a job. James Ellroy found coping with his mother’s death difficult and he transferred his feelings to another murder victim, Elizabeth Short, aka the Black Dahlia, but even then his trauma led to depression, heavy drinking, drug abuse and a life of minor criminal activity. “G.O.H.E.” is an exploration of Geneva Hilliker Ellroy’s savage death, her son’s downfall and how he achieved salvation and inner peace of sorts through writing crime fiction and obsessively investigating the circumstances of Geneva Ellroy’s death. This ties in with ICV’s interest in human passions and how art can be a way of negotiating significant issues concerning life and death.

The album splits into two long tracks “Malédiction” and “Délivrance”, and both feature steely bottom-heavy grinding melodic BM with blast-beat percussion, a mix of distant harsh BM vocals and more monstrous demon voices shrouded in reverb, and synth-generated orchestral background accompaniment. Spoken-voice samples of James Ellroy recounting his childhood experiences and how his writing and determination to uncover the circumstances of his mother’s death (and perhaps even find out who raped and murdered her) proved emotionally cathartic and helped set him on a path away from self-destruction are included on both tracks. The aforementioned acoustic instruments are used sparingly and to either emphasise the intense drama of the subject matter or contrast with it, changing the mood and extending the music’s emotional range. Repeated riffing is prominent as a way of building up momentum and emotion in the music, and immersing the listener in the darkness of Ellroy’s guilt, confusion over his mother’s death and his attempts to cope with it before finding a way out of that pit.

For all the rousing emotion and melodrama generated though, and in spite of the thematic narrative of downfall leading to catharsis and redemption, the music itself tends to coast along without any really great crescendos culminating in a climax and then leading down into a depressive pit or a denouement that signals acceptance or being at peace with oneself. You’d have thought that this is where the piano, the cello and double bass might come into their own, providing a parallel and counterpoint to the post-BM music in its intangible qualities as well as in obvious technical musical aspects. The thunderous music blazes ahead taking no prisoners with promises of significant revelation that might change its direction and the overall ambience – but those promises remain just that, promises. The result is that the music often wallows in dark emotional trauma for far too long, past the moment when it should have started building up towards salvation. Editing for length would have come in handy, at the risk perhaps of chopping out nearly half the thunder, and some listeners may feel the music needs more structuring in the form of linked chapters clearly showing the stages of grief, struggle, realisation and acceptance that Ellroy had to endure.

The In Cauda Venenum duo do have a lot of ambition and imagination, and are more than prepared to take risks with their music and project concept, even if this means their output might not always achieve what they set out to do. They might need to consider allowing their chosen subjects to determine the structures of future musical projects rather than to attack such subject matter with the same tactics and methods repeatedly.