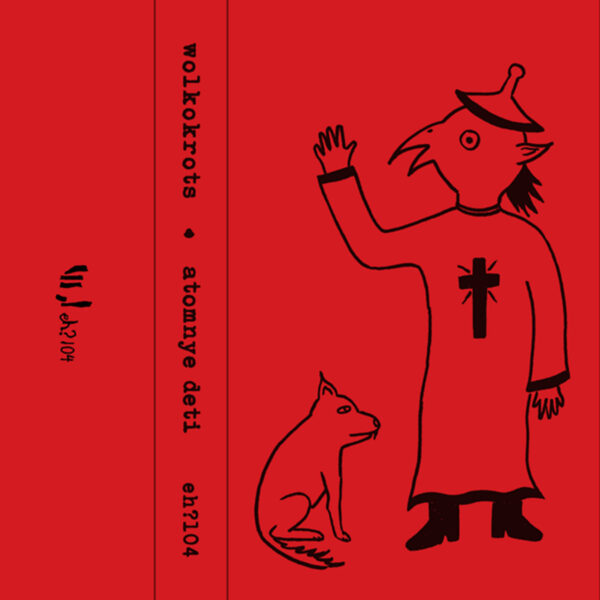 Package of items received from Bryan Day and his imprint. The cassette Nisip Noaptea (EH? AURAL REPOSITORY 110) was made by Johannes Bergmark and Guido Hubner, the latter famed as founding member of Das Synthetische Mischgewebe (or DSM), that Berlin combo that began their unfathomable work in the 1980s. I continue to find myself baffled by Guido’s work, but as I understand it he works mostly with common household objects and uses them to create noises, maybe sometimes amplified; most of what I hear from him is very non-musical, but I expect the relevant process is the act of doing it, investigating these objects for their audio properties. Much the same applies to Nisip Noaptea. I like reading the concise description on the cover, where the details are deliberately kept rather vague; “these bits and pieces share a common stage”, we are told, indicating that what may appear to be a random conglomeration of items on a table are in fact related in ways we don’t yet understand. Further, the gestures used by the two creators have a visual aspect which could be quite aesthetically pleasing, if we could see it, but the audio document is all we have. The creators liken the objects to actors, and the pieces here are supposed to be understood as performance art.

I like the idea that inanimate objects might come to life in this way, although my delight in this is based on children’s books like Alice Through the Looking Glass, where pieces on the chessboard come to life. This may all sound unpromising, and indeed a lot of the sounds are rather neutral, presenting many obstacles to our aesthetic appreciation, but the players do get quite steamy in their actions at times, particularly on the long tracks. Part 4, for instance, is 18:07 in duration and contains some memorable scrapey and stretchy audio emissions. Fans of industrial noise may want to spool on to Part 5, which conveys the impression of a tiny factory running on steam with its miniature motors grinding away, and a steely hammering which is unlikely to be mistaken for a cymbal solo, so non-musical is its caste. There’s even a surrealist dimension to the work, if we can find it; the title, translated from Romanian, means “Nocturnal Sand”, which is intended as a reference to the automatic writing practices employed by such as André Breton and Philippe Soupault (although Hans Arp may have done it too). The cover art also presents a hurdle to the viewer, with its vague and nigh-unreadable image printed in black, green and blue. The cassette Atomnye Deti (EH? AURAL REPOSITORY 104) is by Wolkokrots, the duo of Ilia Belorukov and Miguel A García. I was mildly surprised to see these two highly prolific players working together, as given their international globe-hoping lifestyle it was only a matter of time before they met up, In fact they’ve been slinging hash in this informal arrangement for a few years now; these live recordings, from 2016 and made in a variety of European locales, might be among their earliest manifestations. Even the tape is oldish now, released in 2019, but we only just got a copy and hate to report it’s already sold out. Both our good friends play the expected array of electronic devices, including samples and field recordings thrown in, although Ilia stands out for his use of the “fluteophone” this time around. The duo play soft, play hard, go high, go low…and the tape as a whole lurks quietly in the chambers like some nameless shrew, before sometimes erupting with the fury of an enraged baboon.

Ratio of this loud table-noise factor to that of the “mystery purring” effect is quite low, and Atomnye Deti is mostly a perplexing conundrum for the ears and mind. I mean the logic of the musicianly actions is very hard to understand, and an atmosphere of doubt is generated, Matter of fact I find this “doubty” vibe with a lot of projects where Belorukov is involved; he seems to bring ambiguity, consternation, and unanswered questions with him wherever he goes. Even the customs officers, as he checks in at the airport, are left wondering about their choice of career path as this traveller passes through. What else do we know? The title translates from Russian as Atomic Kids, the cover drawing is by Nick Hoffman, and one track has a sample from a pop song which must have been on the radio at the same time when they were doing their circuit-bending and cryptic drone emissions. I’m reading Mutations (PUBLIC EYESORE PE142) as a showcase for the voice work of Marco Albert, though that may be wrong…his voice doesn’t appear to show up until the second track, when he starts whispering and bleating urgent messages in his own language (Italian, though he now lives in Mexico). Thereafter further vocal performances follow, showing a strong range of what this imaginative fellow can do with his pipes…track 3 shows him moaning in long tones like a mad monk, gradually reaching a trance state where he growls like Yma Sumac in her jaguar mode. On track 4, his words are all but nonsensical, but he speaks them in the measured tones of an authoritative lecturer – until madness overtakes him once again, and the prose becomes poetically incoherent. Only track 6 offers something vaguely melodic, showing there’s a compassionate and warm side to this strange singing man, but even so the transformations – mutations, as the title insists – of his voice are quite extreme and make him appear alien and bizarre, even as he tries to bring us a message of peace and calm.

This leaves us with tracks 1 and 5, both maelstroms of whirling violence, and if there is a voice trapped inside this musical hall of blades then heaven help the poor soul, and we can only pray for his escape. Marco Albert performs the electronic changes on his vocal work himself, and is aided in these heroic psycho-dramas by two fine American musicians: Bryan Day of San Francisco, who runs this label, and Jay Kreimer of Nebraska; Kreimer has made a career out of building instruments from unlikely objects, and it seems he’s notorious among the hardware stores in that state for his creative repurposing. Both Day and Kreimer are credited with “invented instruments” on this release, an area of endeavour that is well represented on other Public Eyesore records, and is likely to constitute a large part of Bryan Day’s aesthetic philosophy. Interestingly, it seems the three never met up in person to make these recordings, but did their parts at home and sent them to Albert for editing and assembly. The result is a surreal, semi-pagan odyssey of possessed sounds, hard to decrypt and yet imbued with a sense of profound significance.