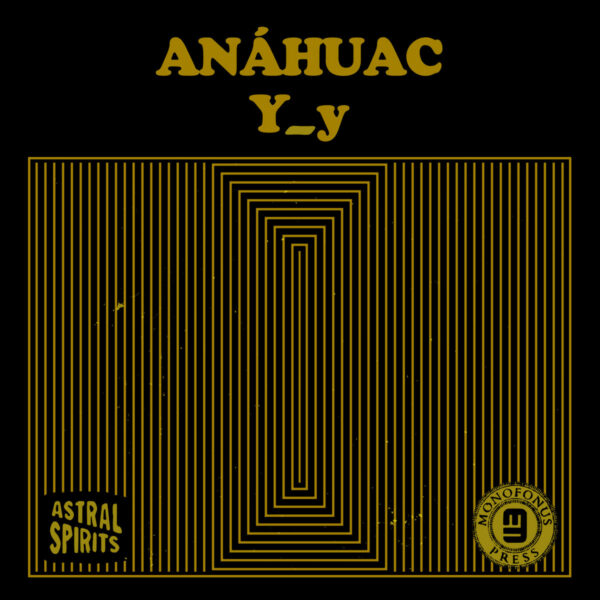 We’ve recently noted the early development and growth of Ignaz Schick‘s turntabling method, on some of his ZORA CDR releases; to bring us up to speed in that area, here’s Ignaz with his trio Anáhuac on a CD titled Y_y (MONOFONUS PRESS MF186 / ASTRAL SPIRITS AS082) from the Astral Spirits label. Three long tracks, recorded in one day in 2016; one way of reading this music is to see it as a modern jazz trio, with the turntables (and live samples) of Schick as the lead, accompanied by double bass player Juan J. García and drummer Chris Cogburn. However, that analogy fails quickly; it’s more accurate to say the trio believe in free improvisation and closely-locked sounds, employing very minimal drum work, small objects, and extended techniques in the bass playing, and the trio blend together to form a very tight unit.

Unlike some turntablers, Schick doesn’t go for surprise and shock, but instead each of these long tracks is intent on creating a rumbling, lulling atmosphere, such that it’s like taking a ride on a ghostly ship through a crepuscular haze. One technique is to use a lot of “obscure found footage vinyls”, as he puts it, neatly eliding the idea of cinema and music; indeed one desired result of listening is that you think you’re experiencing an odd surreal movie, or dreaming about one. Consequently, snatches of screams, cat meows, and opera singers make their way into the generally abstract textures with the casual ease of a Max Ernst collage moment. It’s also very textured; barely a minute goes by without the reassuring crackle of a rotating scratchy record, filling out the sound to saturation point and producing mesmerising rhythms. We’ve heard Cogburn once before when he played with A Spirale, an Italian duo, on the record Autocannibalism; he applied electronic devices to his drum kit, and may be doing something similar here. We expect to hear more from this talented American fellow before too long, not least because of his music festival No Idea which has been happening in Austin Texas since 2003.

This is one of three releases for the label, all with similar cover designs to help unify them; the other two came out as a download and a cassette. We’re invited to admire the productivity of the trio, and to see these three records as different outlooks on the same thing. In saying this, Schick emphasises the trio’s process, their rapport, their transformative method. From 11 May 2020.