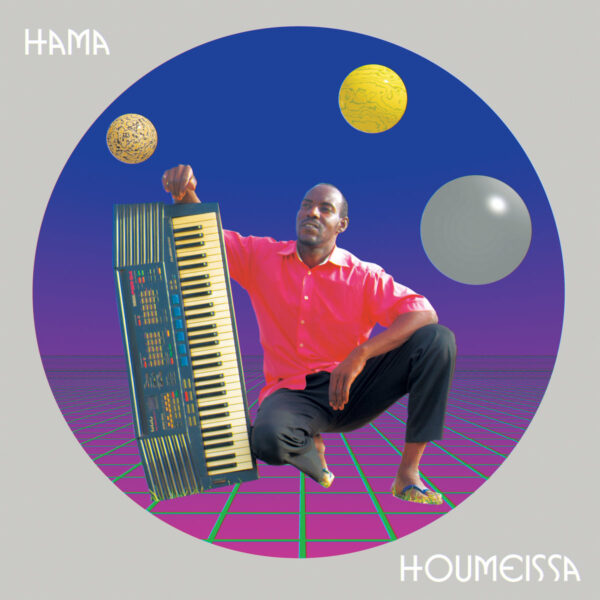 While looking up information on Mamman Sani Abdulaye on Sahel Sounds for my review of his album “La Musique Electronique du Niger”, originally released in 1981 and reissued in 2013, I stumbled across fellow Nigerién act Hama aka Hama Techno, who is more fortunate in not being a lone avant-garde electronic music pioneer but who can benefit from and build on Abdulaye’s example. Using as his source material the traditional folk music of various communities in Niger, ranging from wedding songs to caravan songs and nomadic herding ballads, Hama transforms this music into digital pieces using a hacked copy of a FruityLoops audio studio program. The technical result that is “Houmeissa” – Hama’s second solo album – is impressive when you consider that Hama was working in Niamey (the capital of Niger) and using that city’s spotty electrical grid: the music is layered very well with flowing melodies constructed over polyrhythms and very catchy beats. Everything is very crisp and clean and the music proceeds at a very brisk pace.

The music could be described as a mix of 1980s synth-pop, 1990s-era techno and space-age lounge music. All sounds are completely electronic and listeners would have to be very familiar with the music of the Sahel region in western Africa to recognise melodies, rhythms and any other structural elements and motifs unique to that part of the world. The ten tracks tend to be medium-short – the longest song “Wassa” falls 15 seconds shy of five minutes – which is actually just as well as the songs have a flat effect and the more they repeat in their melodies, beats or rhythms, the flatter and more banal they end up sounding. Lacking atmosphere and emotion, together the songs end up as a soundtrack for computer games of no particular distinction or a cheaply made throwaway anime film. The longer I play this album – fortunately I can play it on Bandcamp and (um) don’t have to buy it – the trashier it starts to sound.

I must say though that Hama does have an ear for composing very pop-friendly tunes and rhythms, and tracks like “Dounia” do show a flair for capturing a particular mood and feel. It seems that Hama is hampered by his available instruments and has quickly come up against their limitations as song-writing and composition tools.