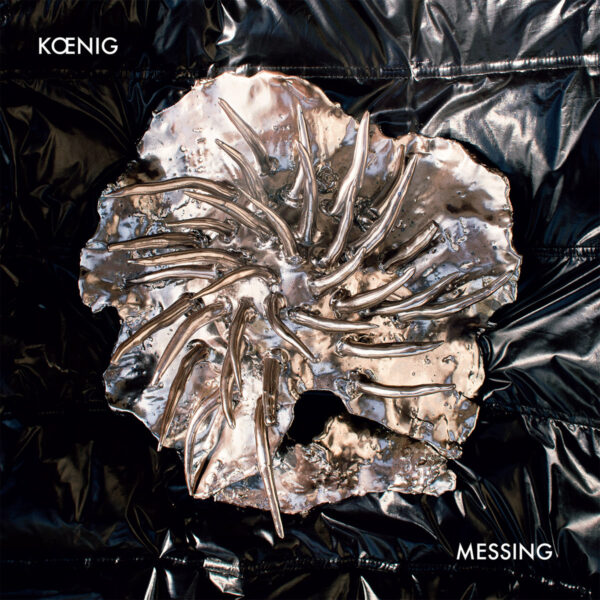 Austrian drummer Lukas König appearing as Kœnig on his Messing (VENTIL RECORDS V_015) LP. König seems to have played with a number of jazz-related acts before arriving at this, his solo record, which is mostly a number of sound-art / noise experiments made using the cymbal, apart from three tracks featuring vocalists and pop beats (about which more shortly). Why the cymbal: apparently he was driven to explore working with just this single piece of his kit because he lost his studio, and because he does a lot of travelling to New York, so I guess the cymbal is one of the easier things to tote about. He also relishes the discipline of a single sound-source, evidently.

On the first track, which also happens to be my fave, ‘Hot Springs’ – he turns in 5:04 of delicious continuous abstract noise in a way which Stockhausen might’ve loved (or at least nodded approvingly for five seconds), as it explores the surface of that metal disc with comprehensive investigative sweeps, and with great zeal. Did I mention “messing” is the German word for brass? An alloy often used in cymbal manufacture, and noted for its flexibility. The other studio experiments – for such they be – were realised with the help of Nik Hummer, the producer who also brought in his modular synth for some moments, which purists might regard as a bit of a cheat if expecting an all-metal project, but it does help to leaven the general mood. Kœnig applies contact mics, experimental microphone placement, and amplification in pursuit of his aims, but at the end of the margin it’s his technique that wins the spike, and he’s clearly put a lot of time into perfecting his manner of scraping and rubbing and, one would hope, tapping with drumstick in a very precise manner.

My second fave is ‘Ceres’ which feels like it also uses slowed-down beats to makes its heavious-mode tromps, but it’s a brief 2:38 gem which emerges as a fine statement of avant trip-hop. Which seems a good junction to mention the “poppy” elements, with guest singers…there’s ‘Handrolls’ where Elvin Brandhi throws an alarming free-form fit (with help of autotune) and Kœnig provides frantic beats. ‘Mr Kiwi’s’ stars the New York rapper Sensational who is thrown off the deep end trying to throw his rhymes into this irregular loping / looping rhythm, but the dark urban mood of this one suggests a good musical partnership was formed. Coco Béchamel‘s vocals on her track are another high spot; barking out crisp, detached observations about the human condition, then gradually growing wilder and more loopy as her ire increases. This particular cut might be the “political” one, if I’m reading the press note correctly.

Kœnig has made an innovative and exciting record, and its concision and taut playing / performances / vocals only adds to its impact. Another strong release from Ventil Records. From 10 June 2020.