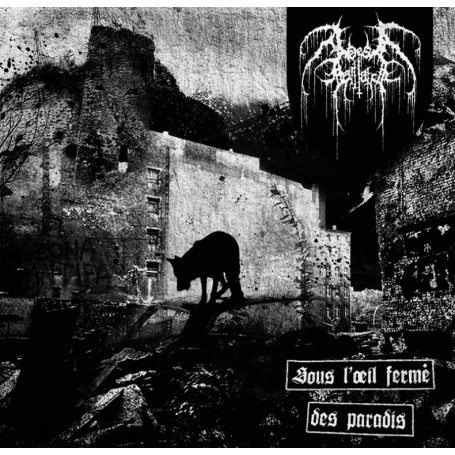 A true case of “here they come / there they go”, Parisian black metallers Oes Galliath came out of semi-retirement to record and issue their debut album “Sous l’oeil fermé des paradis” and then split up not long after. The band’s legacy will thus remain this album and three demo tapes recorded in 2010, a split recording with fellow Paris-based BM band Malroth released in 2016 and a compilation that came out in 2018. Billed as a “hallucinated testament of escapism from the industrial streets of Paris”, the album is an aggressive and defiant call to listeners to resist enslavement within a mechanised system and to experience a rebirth or transformation to a better way of living. At this time of review (December 2020) “Sous l’oeil fermé des paradis” is available in physical CD format through France d’Oïl Productions but will later be available as a CD from Fosse Commune Productions and in vinyl format from Nebula Carcoma Records.

Oes Galliath’s style mixes melodic black metal, crust punk, ambient acoustic music, elements of psychedelia and epic synthesiser-generated arrangements. The album begins in stirring dramatic style with opener “Que brûle Thulé”, complete with acoustic guitar melodic flourish, urgent tremolo guitar shower and thunderstorm clap. Each song has its own distinct musical identity thanks to catchy melodies and riffing that have their own flavour and mood, a slightly different sound and maybe mix of instruments from one track to the next, and the order in which the songs are arranged. The four Oes Galliath musicians themselves seem very intoxicated by the music and the emotion and passion pouring forth from their fingers and at times the songs just carry them away into a new and strange realm where feelings are amplified into intense states of mind and a controlled chaos is the result. Shouty French-language lyrics are dominant in most songs along with screams and howls of despair that promptly disappear in caverns of echo and the balance between music and lyrics in the production is even so that the singing is not drowned out by the guitars or the percussion.

Early tracks bleeding raw aggression and urgency settle into slower-paced and heavier, doomier, less chaotic work with more elaborate layers of music that may be more orchestral in sound and epic in scale in “Luna Fecundis”. A definite dark universe, clear in its sound yet menacing all the same, is steadily on the rise. The straightforward melodic BM track “Gosse de Vide” recalls some of the early fiery attack strategy before transforming into breathtaking dark bluesy rock-out with soaring lead guitar followed by a soft acoustic six-string melody finish. A cover of a pop song, “Les Dingue et les Paumés”, originally written by Hubert-Félix Thiéfaine, while it’s very much part of the sound universe Oes Galliath creates with its melancholy and despair, sticks out from the rest of the album in its stodgy quality and some of the band’s energy and aggression is lost. Closing track “Inhaler la cendre” sets things back to rights with bucketloads of aggression and angry shouty singing morphing into quieter acoustic guitar and fuzzy blackgaze / post-BM instrumental passages sailing off into a blazing sunset.

With every song having its own musical identity and the energy and aggression varying from one song to the next, consistency across the album is uneven. In this respect the clear clunker is the Hubert-Félix Thiéfaine cover which I consider isn’t needed in a work that otherwise would have featured seven original songs, all of which pack a huge punch with their particular styles of music and the energy and emotion within. French-language speakers and readers will get more value from Oes Galliath’s message to listeners to defy our elites and to strive for a better world than those of us who don’t know the language but we can still thrill to the passion, energy and drama in the music. The best moments of the album though come in quieter parts where the atmosphere is very dark and brooding, and the melancholy is so overwhelming that you just want to cry.

As a first and last album of a band with a very strong message that will resonate with people beyond France and French-language extreme metal, “Sous l’oeil fermé des paradis” is likely to gain cult status in future years.