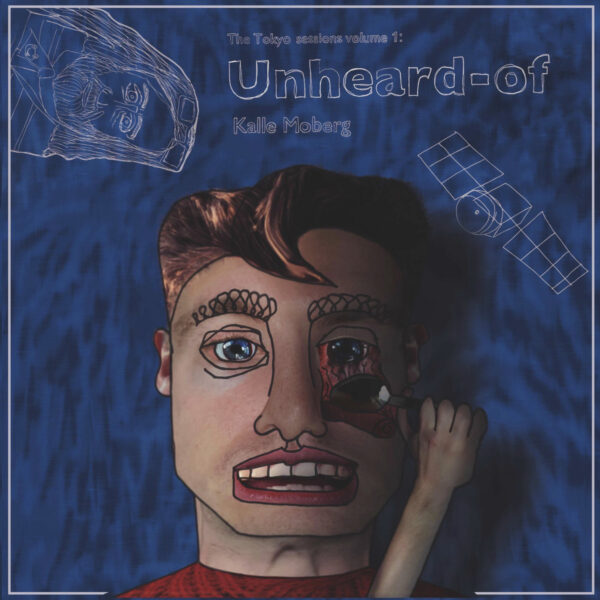 Kalle Moberg is a young accordion player from Norway, and on his debut album The Tokyo Sessions Volume 1: Unheard-of (KAMO RECORDS KAMO001) he works overtime to produce unfamiliar sounds that are rarely associated with this instrument. Strange, bendy notes, odd dissonances, and even some form of microtonality are what he’s after; he tuned his instrument to equal temperament for the session, and along with the unusual sound he’s proud of the fact that no overdubs were used and that the whole album is acoustic.

Kalle Moberg is classically trained, but evidently he has a taste for outrageous free jazz too, as he toured with Paal Nilssen-Love and has played in two of his jazz bands, Large Unit and Extra Large Unit. Indeed it was on such a tour that he met up with Jim O’Rourke, who took the Norwegian under his wing and recorded this record for him in his Tokyo studio. They seemed to have quite a rapport, and the multi-talented American (who also squeezes this instrument) was impressed by Moberg’s extended techniques and highly distinctive sound. I quite liked the long piece ‘Wish Upon a Satellite’, which meanders slowly and stays in a single range of high notes, extended for long periods of time; this one has a stillness and gravity and demonstrates many of his “multiphonic” and note-bending techniques. ‘Untimely Night’ is also pretty good; the exact opposite of the celestial Satellite tune, this one is a low groaner with off-centred basso notes and weird growls in among the tune that isn’t a tune. Moberg sidesteps our expectations of melody and harmony and almost every track projects this off-centred vibe.

Less keen, myself, on the jaunty cuts like ‘Delphic Dance’ which opens the record, and the wacky ‘Skinned Alive by a Blunt Spoon’. I appreciate they’re more light-hearted and perhaps not intended as serious compositions, but I found this side of Kalle Moberg’s musical persona less endearing. Even so, both tunes are shot through with his unorthodox playing, and perhaps the crazy-house feel is part and parcel of his overall vision of what he wants to do with the accordion. He’s certainly a lot more maximal than Jonas Kocher, who has evolved his own distinctive sound on the same instrument, but seems determined to work out a rather focused and ultra-minimalist project with it. There’s also Alfredo Costa Monteiro, whose work on the 2004 album Atolón continues to impress me, but he’s 90% about pure-sound generation; my sense is that Kalle Moberg is still wedded to melody, composition, and playing technique, no matter how far-out his sounds may seem. “Unheard-of” is perhaps a rather exaggerated claim for one’s music, but the album is a good effort. From 10 June 2020.