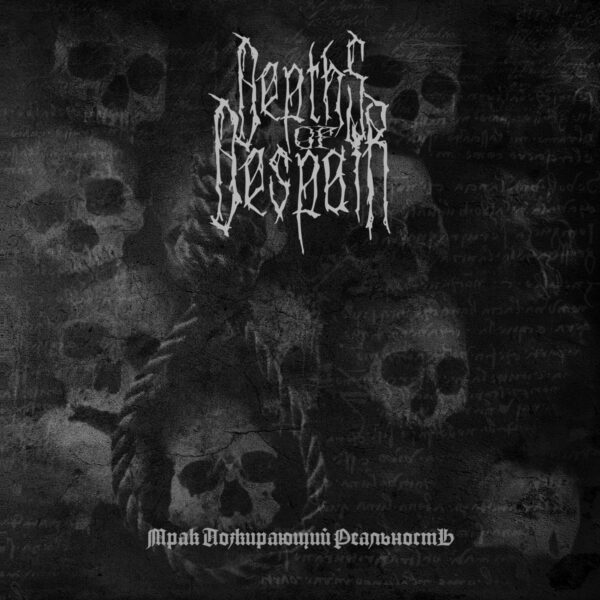 Based in Siberia, Depths of Despair seem to be a fairly new band though this horde has an association with a much older BM band called Svarog that formed in 1999 and which released a demo in 2000 which is now available digitally on Bandcamp. “Darkness Devouring Reality” is the band’s first album which includes two songs “The Path to Revenge” and “Bloody Dragon” released as singles in 2018 and 2019 respectively. The album has been picked up by two Russian labels AuToDaFe Productions and Der Schwarze Tod for a wider public release.

Depths of Despair (hereafter called DoD) play melodic depressive pagan old-school black metal with some death metal influences, especially in the vocals and the drumming, and influences from other underground metal genres. The guitars have a moderately thin, acid burning sound which enables the doomy drumming to sound more powerful than it actually is. The vocals which range from whispery BM to deep guttural DM-style and cleaner singing, all in Russian, are also very clear. The album proper starts with “Ritual of Purification” which sets the tone and style of the band’s music and the production quality. As the album progresses, the variety of music becomes more obvious: death metal elements such as blast-beat drumming and deep swamp-monster growl gel easily with background orchestral synth-generated drone wash, some of which is very cold, and the combination of melodies, synth wash and the varied pace of the music which can slow down to leisurely sometimes gives the music a post-BM feel. While the production seems basic and the range of instruments used is narrow (guitars, bass, drums, keyboards), the general sound is clear enough that bass can be heard clearly on songs where it goes off on its own melodic or riff tangents. DoD have an ear for quite catchy melodies and riffs with a lot of emotion and the result is that tracks like “The Awakening” can be deeply emotional and moving just in the way the melodies and riffs are arranged, even though the music is minimal in style and layering.

The songs that were released as singles in earlier years are in the middle of the album. To be honest, I don’t find that they are different from the rest of the album though they have a lot of aggression and energy. “Bloody Dragon” is based on the battle known as The Night Attack at Târgovishte, fought between the forces led by Romanian prince Vlad the Impaler (he of Dracula fame) and Ottoman sultan Mehmed II aka Mehmed the Conqueror (for having captured Constantinople in 1453, ending the Byzantine Empire and starting the Ottoman Empire afresh with Istanbul, the old Constantinople, as its capital). DoD would prefer us to believe that the Romanians beat the Turks though the reality is that both sides claimed victory. “Bloody Dragon” changes a fair bit throughout, from early blast-beat drumming outburst to more programmed industrial beats, with the pace slowing down towards the end. The other single “The Path to Revenge” is more post-BM / sludge doom metal in style with the heavy depressive mood to match. Later songs from “Land of Wolves” onwards continue the fusion of solemn and thunderous doom, death, black and occasional industrial metal elements.

The album has the feel of a compilation which is quite possible as the singles that appear here date as far back as 2018. Several songs on the album could have been recorded within the time period covered by “Bloody Dragon” and “The Path to Revenge”. Earlier tracks have an atmospheric blackened death style with some good, even emotional music while later tracks after “The Path …” are more post-BM and, apart from the odd spurt of blast-beat drumming fury, sound as if they need some pumping up and fresh cold wintry air to get the energy out. They have a plodding lumpen beat and the massive nature of these slow tracks, along with the deep chanting vocals, makes them appear overblown and bombastic. While the music makes good use of a variety of metal genres, at the same time DoD don’t experiment with the music or the elements within those genres much at all. They are happy to combine elements from each to compose and perform songs with their particular messages and no more.

Technically the album is good with solid and consistent musicianship but it needs more spark and fire and less epic pomposity.