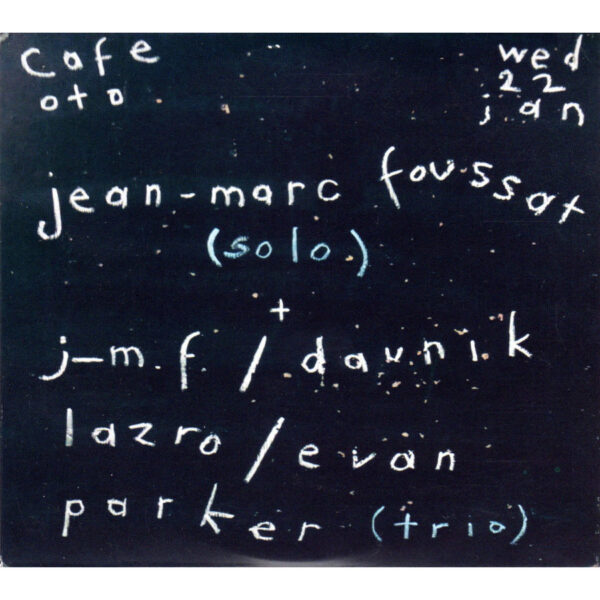 Improviser Jean-Marc Foussat has been appearing in these pages on a regular basis, sometimes solo or in groups, often presenting excellent releases on his own Fou Records label. Today’s double disc set Cafe Oto 2020 (FOU RECORDS FR – CD 38/39) holds a special personal place in his heart, I would assume. We’ve long known that he was drawn to free improvisation in the early 1980s, and personally made some great recordings of live music that ended up on the Incus label. He told the story of his epiphany to this magazine in 2004 (TSP 12th issue). “Travelling from Nice to Italy, because I’d read in a Jazz magazine an advert about the Florence/Pisa festival in 78 or 79, I received confirmation of the kind of music I wanted to engage with, hear, listen, do, live and love. Something was happening in this festival as a meeting between the US and the European way of music, between Jazz and Contemporary music, and the confrontation of those two spirits was marvellous…listening to the Lovens/Lytton duet I thought the music I was hearing was genuinely coming directly from the brains of those two human beings playing together.” Further episodes of the story, and connections with great musicians, are contained in the liner to today’s release; he met Daunik Lazro at Angouleme around this time, and counts him as a lifelong friend. And he met Evan Parker at that Pisa and Florence festival, confirming that “I was so overwhelmed by the power of their music that I decided on the spot throw myself into the adventure, body and soul”.

Some forty years later, these musicians remain his friends, and he is still in love with the music. When invited to play at Cafe OTO in London, he was delighted at the chance and invited his two “prime friends” to play with him. The results of this 22 January 2020 concert are now ours to enjoy…the opening set is Foussat solo for 31:35, playing his Synthi AKS – an instrument he has made all his own – and adding wailing tones with his singing voice. ‘Inventing Chimeras’ is strikingly original synth music, 100% improvised on an instrument not often associated with or heard within this genre. Characteristically for this very passionate player, the music is filled with emotion, passing through numerous turbulent and stormy passages (some of them verging on the terrifying), balanced out with melancholic and still sequences of plaintive wailing. Voice and instrument merge seamlessly, and the classical imagery of the title is enough to allow us to hear other supernatural beings from antiquity, such as the Furies or dead spirits from the house of Hades. Heartfelt and haunting music for sure, and stamped with the very honest and expressive personality of Jean-Marc Foussat. It’s some way from the wild noise of his 1980 solo LP i, but the subtlety and craft of this work is non-pareil.

The second disc, titled ‘Présent Manifeste’, is the trio of Daunik Lazro (tenor and baritone sax) and Evan Parker (soprano), playing with Foussat on the Synthi and voice. What makes this work so well is that it’s a glorious polyphony – four voices (effectively) all sounding at the same time and not getting in each other’s way…the circular loops, intricate repeated patterns, and inventive drones of Parker, the alienated cries and heroic warrior-shouts of Foussat, his freaky synth noises and echoed repeats, and the romantic and florid lines of Lazro. Everything overlapping and mutating in a free-form and free-floating array of ideas. Also much to enjoy in the full-on continuity of the music; no mindless droning on automatic pilot, nor is the music fractured into multiple unconnected outbursts of sputtering, restless, “free” music. It couldn’t have turned out better if the whole 44:50 had been composed and scored from start to finish; this is real interaction and telepathy at work. And yet apparently it was the first time they played as a trio.

“For the past 40 years we have been dreaming the music we could make together,” writes Jean-Marc wistfully, “and finally, here we are, the three of us, for the very first time.” From 1st June 2020; an essential set.