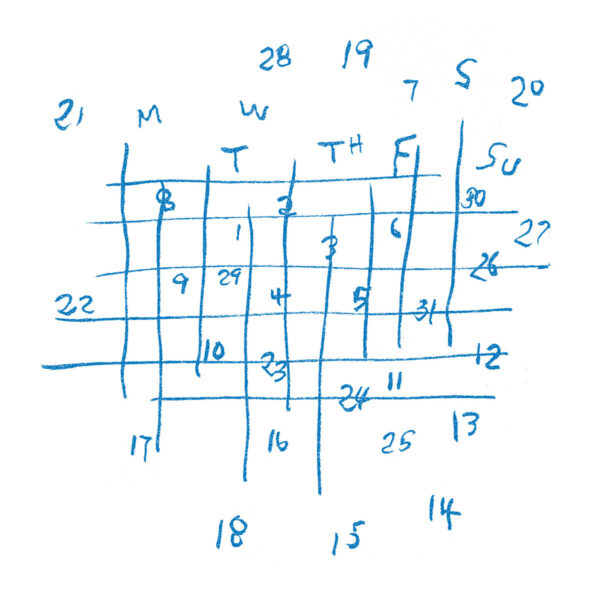 Here’s a gem of enigmatic mystery-chamber-jazz minimal compositional restraint…the players are Brodie West, Evan Cartwright, and Simon Toldam, and the record is called Fortunes (LORNA RECORDS 013), one of four items we received from Nick Storring in Toronto.

Brodie West and Evan Cartwright usually perform as a sax-drums duo under the name Ways, and since 2012 these two Toronto players have built up quite a strong rapport through their explorations. Despite all the labels and genres one might like to cast at these two fugitive spirits (see opening line above), they would wish to resist them and flee the bird-catcher’s net using lift, forward thrust, and the windy elements to make good their escape. I don’t think they would dispute that their music is lean, simple, and almost as plain as a black-and-white painting in its transparency. But they also aim at – and achieve – an unusual musical condition which I can only liken to a Chinese puzzle, or an ancient riddle translated from an unknown language. I mean their playing is full of delicious question marks, unexpected pauses, and gaps; and things depart down unexpected hedgerows, like botanists in pursuit of a rare lichen.

Yet all of this is done without creating self-consciously “startling” music; so far, the tunes on Fortunes operate within the taut framework of discipline and poise, not the sweaty free-for-all jousting associated with the steamier side of free jazz. They want to leave space for their own “idiosyncrasies”, as they term their playing style, only asking for room to breathe and to be themselves. Who wouldn’t want that, apart from the aggressive realtors in Toronto, who stop at nothing to force a man into a cramped apartment block of their choosing (with no possibility of escape from the lease). At this point we need to welcome an outsider, the Danish pianist Simon Toldam, who I account as the “third wing” in this two-wheel scenario, who joined them on one of the rare occasions when the duo permitted an outsider to enter their sacred circle. Into a Copenhagen studio they bundled, and this record resulted. I have never heard the playing of Toldam ere now, but anyone who is man enough to join a trio led by the major improv loon Han Bennink clearly has an iron constitution and a turtle shell carapace, and is to be embraced. His clipped phrases sit perfectly with the ambiguous toots and murmurs of West, and the uncertain taps of the Cartwright kit; might be because Toldam does play “prepared” piano in places, adding that distinctive sharp-lemon peel taste to the music as needed; methinks but it’s more to do with his well-chosen phrases, taciturn and concise, saying only what is needed at right time.

It helps that Ways – even as they speak in conundrums and wear Greek theatre masks at all times – leave so much space in their playing. If you’ve ever felt “choked” by a jazz performance, it’s probably on account of the ego-pollution factor; conversely, this record gives you (too) a chance to breathe. Might also mention West has a connection to The Ex, and Getatchew Mekurya, and Han Bennink; is member of Drumheller with other composer-players in Toronto. He doesn’t scoop up a composer credit for this record, but parts of it do have a well-structured vibe, and there are recognisable melodies. Feeling full of positive praise for this compacted gemuloid. From 15 June 2020.