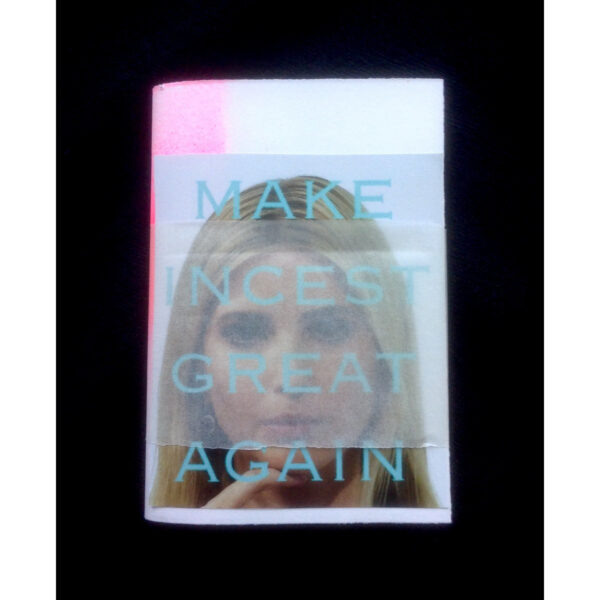 Second of two new cassettes from Rinus van Alebeek and his Staaltape label is called Make Incest Great Again, an item that’s highly provocative both in title and content. It’s a remix work, compiling many if not all of the same agencies who did the Kylie Golden Remix Tape (Volumes 1 and 2) and Dear Concerned Employees, both of which we noted in 2019, and both of which delivered very barbed satirical content. Today’s release is no less barbed, and indeed in place succeeds in delivering the kind of subversive, unsettling effect I assume Rinus and his collaborators are aiming for.

The target this time starts with Ivanka Trump, and the cover art is a détournement of the slogan “Make America Great Again”, through which the wider issue of the current President of the USA is addressed, and the more troubling theme of “authoritarian leaders” and what’s happening to the world today. A starkly-worded warning inside the release states simply “Once a mass of people dominates the world we are living in, qualities such as listening and patience disappear. Dialogue will disappear. Reason will disappear.” It’s hard to disagree; those of us living in the UK have likewise seen the pernicious effects of a populist leader, and the truth-sapping effect it’s all having on the collective psyche. For instance, I wrote the following in a letter to friend in February 2020: “…it suggests quite strongly that the entire world is going mad around us. I would say that you are one of the sane ones. At least you see clearly what’s going on, and you’re not afraid to face it and talk about it honestly. That’s rare – especially in the UK just now. We’ve had about three years of carefully-crafted lies, misinformation, and sneaky psychological tactics. I am certain this is going to have a bad effect on our ability to think correctly; soon our collective brain-power won’t be able to function properly, and we’ll simply short-circuit.”

Appearing on this cassette are many of the same alias names from those 2019 tapes: The New Plastic People, Kylie Minogue, Sean Jason, Mrs Mangle, El Tonto Bing Bang, George George, kp and Kim Wild 93. The general trend of their work is that they produce collage tape works, making liberal use of wrong speeds, many layers of sound, music samples, and voice samples. Plenty of voices across the whole record in fact, though – perhaps surprisingly – not so much use of the voice of Trump himself. In the 1980s, it used by quite a common thing (I seem to recall) to use the voice of President Reagan on pop and rock records for satirical purposes, and although I might be overstating the case, the most famous example is on ‘Two Tribes’ by Frankie Goes to Hollywood. American hardcore punk bands around 1984 also took several swings at Reagan, though they may not have used voice samples, preferring collaged and cartoon artwork to satirise the target. 1 This tape however exhibits a more oblique, outsider, European take on the same subject. None of them like what they see. Rather than use recordings of Trump’s voice to make him look ridiculous, or hypocritical, instead the plan seems to be to construct a nightmarish vision of the modern political stage, where nothing is what it appears to be; the whole album projects a looking-glass world, a place of general absurdity. More than half of the spoken word elements produce plain gibberish; the few coherent phrases that do emerge are cold, alien, and disconnected.

Specific targets that are worth noting: on side two, one track (I think it’s ‘Chromosomatic Errors’) is a blatant sex satire full of innuendo about the alleged sexual harassment stories, one that stops short of actually being libellous, while still leaving a bitter taste in the mouth. The track that follows, ‘Peeping’, is no less contentious, with its repetitions of “I know you’re watching me” giving us glimpses of a voyeuristic peep-show Hell and a general descent into a psycho-sexual abyss. For ironic effect, these two are proceeded by a tune called ‘Their Hole Beautiful Family’, using cut-ups of Trump’s voice to point up what has actually become of the notion of “Family” in today’s world of self-serving egotists. It’s but one of the things America now seems to be in danger of losing; that wholesome sense of togetherness, something which (long ago) the country used to pride itself on. Equally poignant, and in the same vein, is the tune ‘Grandpa XIXOXO’, which makes its point largely through its use of a sung version of ‘My Darling Clementine’. If we can read that song as a prime example of American popular folk, then we have only to hear this listless, dispirited singing to realise the low point that America has come to now. Defeated, uncertain, yet still trying to resuscitate a superannuated (and mythical) version of its own history. In this country, I’m reminded of our recent and highly nonsensical furore about the Last Night of the Proms, where some dishonourable and perverted form of patriotism was lurking in among the shrill, twisted arguments. What is it that we’re holding on to? 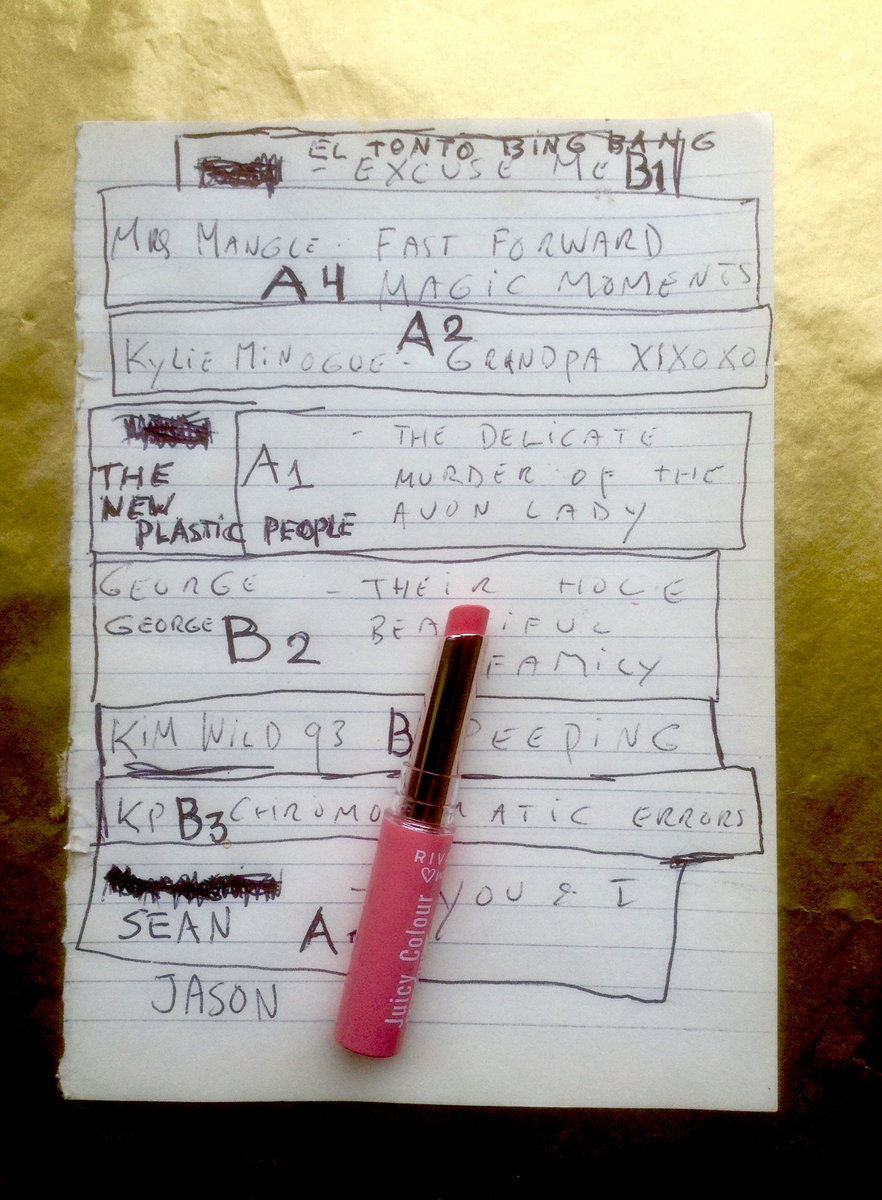 Make Incest Great Again presents a darkly skewed vision of the American dream – politics, sex, money, capitalism, freedom – Norman Rockwell illusions and dreams, that are now shown to be gradually turning rotten. I suppose the “obvious” targets that are not covered here would include imperialist wars and police brutality (always hot topics, especially right now), but those can turn into rather worthy and abstract protest themes. By concentrating its focus on actual people in the Trump family, and taking an unflinching look at repellent subject matter, this tape actually succeeds in tapping into a much richer seam of satire. “Let repulsion be a tool”, concludes the printed text within, “and use it to create a work of art, that helps to change the image of the authoritarian leaders.” Devastating stuff! From 15 June 2020.