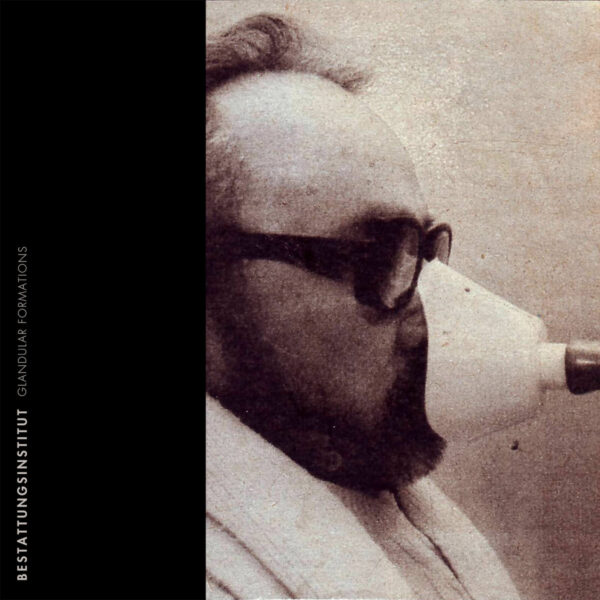 Intense LP of fascinating industrio-ambient doom and voice drone heaviness from the lovely label Verlag System…as you recall this Spanish label has been concentrating some effort on showcasing past glories from Spanish deep-abstract music released on cassette in the 1980s, starting with Miguel A Ruiz, but today we’re hearing from the German quarter. Siegmar Fricke is quite an important player in this area, but I never really heard much of his music – all I have is a copy of Stroma-Konkret from the Russian Monochrome Vision label, a 2006 item he made with Maurizio Bianchi. Fricke has released solo material since 1987, but also recorded as Bestattungsinstitut, and indeed produced his own cassettes on his label of that name, and on ZNS Tapes. Today’s LP Glandular Formations (1988-1990) (VERLAG SYSTEM VS020) is a compilation of tracks from a number of those tapes from this golden period, including such titles as Dissection, Martyrium, Schizophrenie and Bestattungsinstitut.

Two years of musical endeavour are thus covered by the compilation, which coheres very nicely and provides a very satisfying listen, sequenced for maximum impact and amounting to a very comprehensive snapshot of Fricke’s work. Well, I say satisfying, although this implies some “pleasure” in your listening which might not be the main takeaway from today’s spin. All the music is quite heavy, abstract, vague, and at times quite nightmarish; while a lot of it is generated by tape loops, distortion, and echo, there are plenty of sampled voices, and these are treated extensively such that we can’t recognise them as intelligible speech at all. One such treatment is varispeeding, slowing down the voice to an extreme degree. So far these are all quite well-known tropes and methods, but I assume that in the late 1980s this was still a new and adventurous way of working, and this LP still delivers a very strong atmospheric kick, the ideas fresh, the spirit of exploration very much in evidence in the pathways trodden by our questing Siegmar. The cumulative effect on today’s spin is something verging on delirium, a bizarre and despairing view of the world and mankind’s fate, albeit one informed by a black sense of absurdity. I have on occasion glimpsed the same absurdist streak in what recordings I have heard from other extreme German experimenters of this period, namely H.N.A.S. and Column One, both of whom have created moments on wax that are simply too troubling for me to revisit on a regular basis.

Speaking of good old Miguel A Ruiz, he provides a warm and informative background note in the press release, describing his first encounter with a Fricke tape in 1987, a contact made through his friend Andres Noarbe. Ruiz started sending letters and cassettes to Fricke, eager to learn more and to hear more; thus began an association that continues to this day. The story is also a glimpse into those relatively innocent days before the world-wide web, when people made contact the old-fashioned and slow way via the mails, and culture grew at a more leisurely pace. Indeed this was the first time Ruiz sent a copy of his Orfeon Gagarin tape outside of Spain. Ruiz reveals that Siegmar Fricke was working with fairly basic tools – cheap samplers and a four-track PortaStudio – but getting very impressive results in what I assume was an economic and efficient manner. Around that time Fricke had been making “pop-electronic” music with a kind of post-Cluster vibe, but it’s the Bestattungsinstitut period which evidently appeals to Ruiz, and he speaks glowingly of these 10 cassettes “full of gloomy ambiences, dotted with strange mechanical cadences”. He rates Fricke’s work in this area very highly, praising its “lucidity and … imagination”, and the music of Bestattungsinstitut continues to shine in what is now a very over-crowded field. We’ve also words of praise from Bianchi, who speaks of “the fatalist evolution of torrential modulations” and such like.

Glandular Formations has a compelling, dark energy and I found it very accessible, in spite of the foreboding tone and, as noted, the nightmarish atmosphere and understated horror of some of its themes; I continue to protest that I am not really a fan of “industrial” music at all, but then items like this turn up and cause me to re-assess my views to some degree. For one thing it doesn’t project waves of bleakness and violence, which is what I tend to expect from this genre, and it also allows a certain amount of space for contemplation and reflection. Even so, “intense” is still the watchword, and you’ll be hard pressed to find a breathing space in these thick walls of shrouded shadows and foggery, full of dramatic audio incident, and some of these mutant voices will haunt your dreams for many nights. The front cover image is vaguely disturbing, and also hints slightly at another side of industrial culture I find so repellent – I mean the obsession with nasty diseases, mutilation, and general body horror favoured by many industrial types who have been mired in the nostalgie de la boue. But the back cover collage by Fricke is more interesting, where with simple juxtapositions of commonplace images he lets us know exactly what he feels about “normal” people in society, and manages to express strong feelings of alienation while also laying bare the void that can exist in an unexamined life. Another excellent package from this fine label, which clearly doesn’t believe in short-changing its audience. From 22 June 2020.