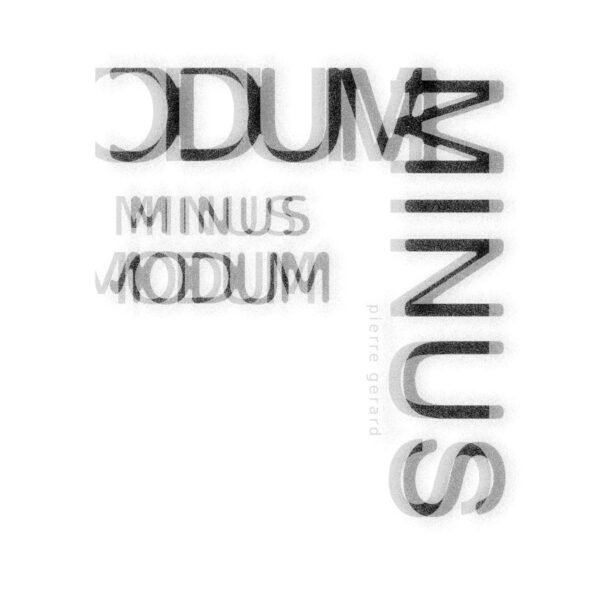 Latest release from the close-lipped Belgian composer Gerard, a full-length album as opposed to his last mini-CD (Merle Vegetal). I say “close-lipped” since our Belgian friend prefers not to tell us much about his method, technique, or compositional aims, apart from a line of text which might as well be a clue in a cryptic crossword or part of the world’s longest and most difficult treasure hunt. Today’s clue is “a different air, another time…”, which is evidently important enough to warrant printing on the spine of the cover as well as on the inside.

Once again Gerard uses his guitar, low-key electronics, his own voice, and inanimate objects in the creation of a five-part work, this time using Greek letters to identify the separate parts of the structure. He also uses a lot of silence, as usual, and one has to strain quite hard to make out any perceptible markings on this blank stretch of time. Actually what may appear to be pure silence actually contains a very subtle and washed-out drone of some sort, produced by means we know not – it’s like a whistling gas-jet in the house, assuming you live in a tiny doll’s house and you yourself are a miniaturised human being. I say this because quite often Gerard’s work does feel like an “escape” or retreat from the vicissitudes of life, a safety zone where perhaps we can shrink down to the size of an atom and dwell in a blanked-out world of whiteness. It might even be a comforting thing to do at a troubled time.

When you put it like that, the occasional interruptions of a plucked guitar string resonating for mere seconds, a broken phrase from a murmuring voice, or a bumped close-miked object can seem like unwelcome intrusions into our private space. But maybe they also serve as audio markers, beacons on the cliff line to guide the ships into the harbour. If we lacked these fragments of “reality” (whatever the heck that means in the context of such a pared-down abstract composition), we might not be able to put things in perspective. But then if one thinks about perspective, that leads to a line of enquiry involving ideas of “depth” in the recording, the creation of an imaginary audio space, and this is where Gerard’s work is singularly lacking; like other previous records, Minus Modum is curiously flat and constrictive, no sense of dimension in the compositional arrangement, no effective use made of the long durations, and no interest in moving around much inside the miniature world he proposes.

I can put up with it if modernism insists on removing any type of content from the work, but I still need something to engage with; Gerard has taken things so far that he even denies form and duration as meaningful compositional elements, leaving us pretty much with a desolate, arid emptiness. From 30th July 2020.