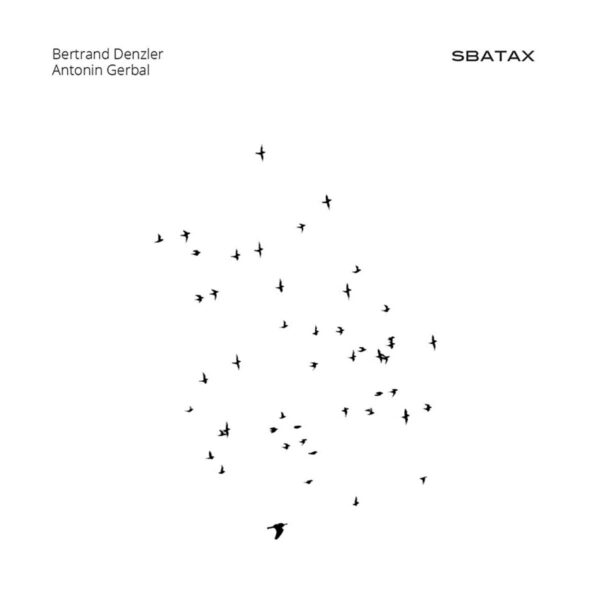 Free jazz workout Sbatax (UMLAUT RECORDS UMFR-CD33) from French-Swiss team recorded in Berlin…despite minimalist cover art of white space and tiny images of birds, it’s an intense blasteroo along lines of Shepp or Coltrane, or 1969 vintage picked up by mics of Bisciglia and crew for their BYG label. Those blurting the blast are Bertrand Denzler on tenor sax, and stickman Antonin Gerbal tripping the toms.

These two have joined forces before on Heretofore in 2015, and Le Ring in 2016 (with Axel Dorner), plus there’s Gerbal’s solo album Sound Of Drums; two of those three likewise imprinted on Umlaut Records. Noteworthy for this one-take October 2019 sesh is the unflagging energy of the music, which starts out as a skyrocket in the stratosphere and pretty much stays up for all of 38:40. This mainly due to Gerbal who doesn’t care to lift his foot from the accelerator until they reach the fields of Elysium, and is mainly happy when speedometer is bouncing in the red. This isn’t to say Sbatax is out of control (like some crazy bus or traffic accident waiting to happen), as there’s a clear sense of direction to the general forward-travel careening of the music, and if it’s “control” you want then Denzler delivers a rather clean and tidy version of free-blowing, not without buckets of emotion (constrained), but stripped of the over-blowing, rasping mouthery and general upfront dynamite-antics we might associate with Ayler, Sanders, and related freedom-seeking giants.

As such this means that Sbatax delivers the roast beef with maximum efficiency and minimal wastage. Clean, striking, joltifying. From 26th August 2020.