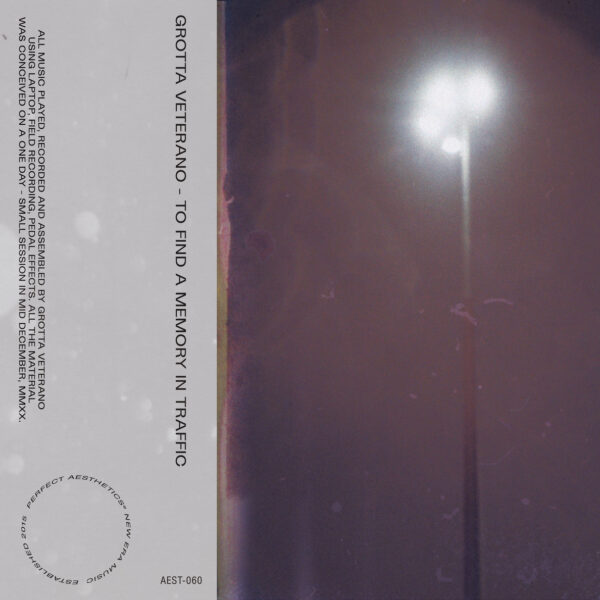 Based in Monrupino, a town in Italy close to the border with Slovenia northeast of Trieste, Grotta Veterano (born 1990) is starting to come into his own as an experimental solo music artist. “To Find a Memory in Traffic” is Veterano’s second solo album and his first for Perfect Aesthetics. All the music on this cassette release was created and recorded in a single session with laptop, field recordings and pedal effects in mid-December 2020. The music is one longform piece divided into four parts with the first two parts forming the title track.

Both parts of the title track are slow, subdued pieces of melancholia with piano predominant in both and stringed instruments starting to come to the fore in the second part. In Part I, melodies seem very fragmented, allowing the background noise ambience to seep through. Echo effects and the very sparse nature of the music, with treated sounds, give an impression of alienation and loneliness in a dull, depressive city environment filled with smoke, air pollution and a feeling of uncaring, uninterested inhabitants. Part II takes up some of the fragments of Part I and develops them into something more definite if still sparing in style and tentative in delivery. The piano melody loops over and over as though trying to find connection with the trilling acoustic guitar trickles.

The other two parts form “The Weight of the Others” and these are even more fragmented and insular with the music in Part I initially barely hanging together save for soft droning ambience and frizzly distant noise sparkle. It does discover more confidence, though slowly and gradually, and develops into a warm, slightly shimmering work of slow piano melody, background drone and field recordings of conversations. In Part II the piano seems to be stumbling alone into a dark and cheerless space.

Admittedly the music overall comes across as very insubstantial and listeners may be frustrated that it seems to go nowhere except in small tight circles. It may be a reflection of the restrictive times we are currently forced to live in, with government responses to the global pandemic in most countries being to shut down most activity, especially cultural activity that attracts large crowds and clamp-downs on political freedoms and liberties. Across the recording the mood seems glum and empty of vitality. Instruments appear to grope towards and past each other, continuing to blunder farther away from each other in a murky space. This cassette may not be the best way to introduce a new experimental music talent but in a dysfunctional world, having this recording means a voice is present and has something to say to us, even if it’s not much at all.