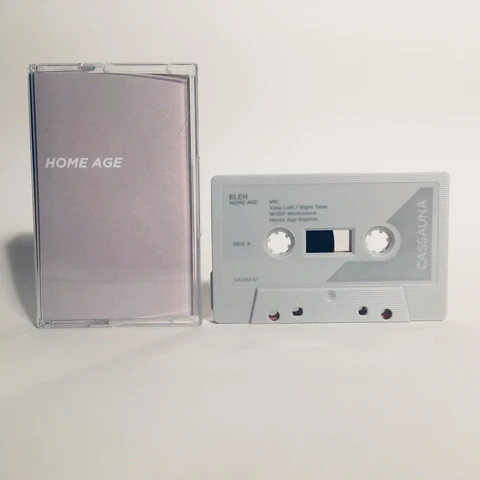 The works of London-based composer Eleh often appear as limited edition cassettes through the American label Important Records. Recently, we got a chance to hear one of these, Home Age [III] (CASSAUNA SAUNA57), released in 2020 as a limited (100 copies) run of tapes on this sub-label of Important.

This is the third in his Home Age series, which seems to have begun in 2017; all releases actually bear the same title, and have similar minimal cover artworks. They comprise home recordings he’s been making over the last five years. While most of what I’ve heard from Eleh comprises very minimal electronic drones of a very abstract nature, I’m finding a bit more melodic interest on this Home Age release. The long-form drone is still the basic building block, but the texture is occasionally decorated by a few thin, forlorn and wistful tunes (played presumably on synth keyboards) resembling a plaintive oboe, lost in space and shedding a tear about the sad state of the world. The label describes the Home Age series as a “search” – Eleh is looking for forms of expression, and ways to develop same, evidently doing so in a very judicious manner, where he won’t be rushed into making any rash decisions. The deliberate slowness is not only the basis for his music, and his compositional approach, it’s probably part of his personal philosophy as well.

We’re also told that the “contemplative, emotional ambiguity” of the music is balanced by an interest in “time-stopping focus”, and this particular effect – where time stands still, or slows down to a point where it feels to the listener like being drugged on ten bottles of ether – is I think another one of Eleh’s hallmarks. It’s not enough for art to simply describe these fundamental states of mind, the artist has to work to invoke the experience, and this is something Eleh is able to realise with his very precise, distilled music. This part of the project is alluded to in the title of the second piece, ‘Time Left / Right Time’, a neatly-constructed elliptical and symmetrical phrase which almost invites the listener to look for the same sort of elegant structure within the music. If you flip the tape over, you can hear all the music on the A-side played backwards; maybe hearing this could lead to a form of backwards time-travel. Released in July 2020, arrived here 10/06/2020.