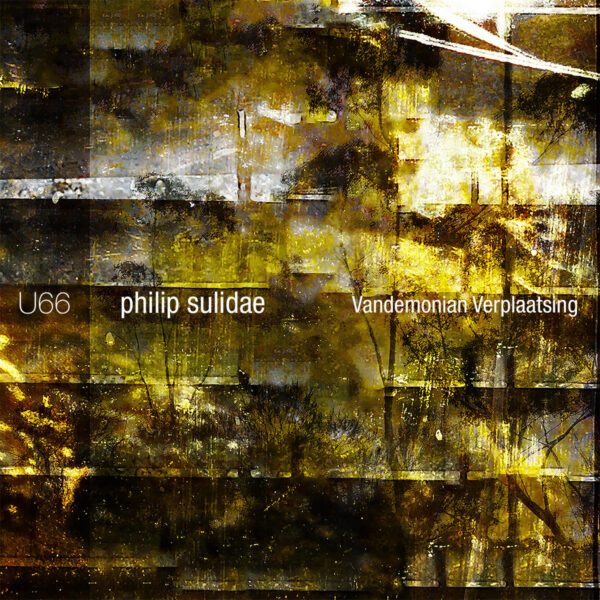 A long-time stalwart with Belgian label Unfathomless, Australian artist Philip Sulidae, based in Hobart (where he has been living for some years now), made various field recordings in his home city at different locations and at different times. The titles of the tracks on this new recording “Vandemonian Verplaatsing” – “verplaatsing” meaning “displacement” in Dutch, and Hobart being the capital of Tasmania which was originally named Van Diemen’s Land in 1642 by the island’s discoverer Abel Janszoon Tasman after Anthony van Diemen, the then Dutch governor of the Dutch East Indies (now Indonesia), not to mention Tasmania’s original function as a supermax prison facility for the most hardened criminals, hence the play on “Van Diemen’s Land” with “demon” and the alliteration afforded by this history and the Dutch language – refer to the locations where Sulidae made his recordings.

Recorded and composed over 2019 and 2020 with Zoom H2 and Tascam DR-60D audio recorders, Rode NTG2 shotgun microphone, other microphones, computer and software, this recording is much quieter than I would have expected of the Hobart urban and suburban environment – one track “End of Farm Road” must have been recorded near Mount Wellington, right on the outskirts of Hobart – and the sounds and ambience captured do not greatly differentiate one track from the next, apart from the rain sounds on “End of Farm Road”. Sulidae’s interest lies mainly in the capture of the audio environment of a location at a particular time through the recording technology he uses, and how over time the temporal distance grows between the preserved audio environment and the time at which we return to that environment when we listen to the recording. This is not very different from when we look at old photographs of ourselves as babies and children and note the temporal distance between the occasions when those photographs were taken – perhaps when we were being christened or were celebrating birthdays or special events – and the occasions when we choose to look at those photographs. We get a sense of the temporal displacement that has occurred since the events when the photographs were taken, and how much we have changed since those events occurred, and especially how much the world itself has changed – because the photographs and the recordings capture not just the immediate visual and audio environments, they also record details, usually very minor, of the world that existed at the time the photographs and recordings were made. It is this awareness of the change in ourselves since the original events captured took place that is the displacement Sulidae refers to.