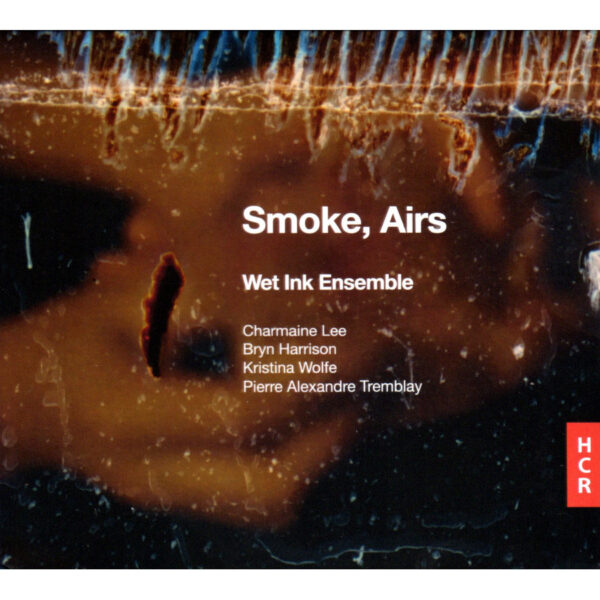 Astonishing new record from Wet Ink Ensemble, that New York group led by Sam Pluta and dedicated to playing new, bold and exciting modernist works in the area of classical avant-garde…we have been hearing their incredible music since about 2013 and have been consistently impressed, with releases arriving on the American label Carrier Records. Today’s item Smoke, Airs (HCR24CD) is an English release from Huddersfield Contemporary Records, an imprint of Centre for Research in New Music based at the University there, and also the HQ of the Huddersfield Contemporary Music Festival. Wet Ink Ensemble are a seven-piece chamber group on this recording, combining strings, woodwinds, percussion and piano with the electronics of Pluta and the voice of Charmaine Lee. Present are Alex Mincek and Eric Wubbels, whose solo work has reached these quarters; actually I think most if not all of Wet Ink are composer-performers. All the works on this record were composed in 2019, which I mention as an earnest of just how contemporary this group are.

Vocalist Charmaine Lee composed the opening item ‘Smoke, Airs’. Low-key whispers, skittering strings and discreet rumbling emerge from the players, creating a loose framework in which Lee murmurs her vocalese, an invented “improvisational language”. If it’s true that the essence of the work is “suggestion”, it’s impressive that the players are able to render this mist of fog and sighs with such unerring precision. Each instrumental micro-second is delivered with the accuracy of a stiletto blade seeking its target.

Bryn Harrison is an English composer born in Bolton. I see he’s made two records for Another Timbre, Vessels and Receiving The Approaching Memory; there’s a label that works overtime in documenting the exciting inter-zone between modernist composition and improvisation. His declared interest is in exploring “musical time”, and our perception of it. He does it with repetition, and circular phrases; aiming to see the same musical content from different angles and perspectives. His devices rely on the audience’s memory of phrases; he hopes to affect our perception of duration. On ‘Dead Time’, he goes a step further by combining live-performed loops with pre-recorded digital loops. It raises questions about the “experience of time” and how it will be different for each audience member. In three paragraphs of text, his mission is elegantly outlined with concision. I’m impressed; there’s something vaguely disturbing at work in the uncanny musical movements here, quite some way from the benign repeated patterns of my beloved Feldman. It’s also refreshing that Harrison’s investigation of the problem of duration doesn’t take the path suggested by composers of graphical scores; I suppose I mean that he’s not imposing too rigid a structure, and the music has vitality, flows perfectly. After 21:37, I soon lost track of time and woke up 50 years later like a latterday Rip Van Winkle.

Kristina Wolfe‘s work ‘A Mere Echo of Aristoxenus’ has been derived from a study of architecture and acoustic space, associated with two historic sites. What a variety of radical methods these modernists use – amazing to find them all on a single record, but that’s a testament to the adventurous spirit of Wet Ink Ensemble. Two pieces are presented in this set, ‘Ghost Aulos for Virutvius’ and ‘Heptaechon’; Wolfe’s achievement here has been to combine a number of very specific methods and sources, some non-musical in nature, and depending to some extent on archaeological research and digital reconstructions of ancient buildings. She’s used the latter to derive measurements, and understandings of acoustic space; she’s also gone to actual historic sites and done her measurements there. Most intriguing to me is the use of early written texts, including a written description by Vitruvius of bronze resonators, that were built by the ancient Greeks and used to amplify sounds in an amphitheatre. Through a combination of historical research, calculations, acoustic skills and a certain amount of imagination, Wolfe arrives at powerful evocative works, which manage to bring the past back to life for some fleeting moments. Wet Ink Ensemble provide very pure timbres, distilled sounds, and restrained playing; each note just hangs in the air, pregnant with musical and historical information.

Pierre Alexandre Tremblay is a Canadian electro-acoustic composer who we have heard on the empreintes DIGITALes label; he has also played in the improvising group Splice.
In (un)weave, he’s aiming to say something about the sheer complexity and inter-connectedness of everything. He himself describes it by reaching for the metaphor of “a crowd in a frantic city”. If you observed the actions of a busy city from a certain vantage point, you might perceive a moment of cohesion when everyone stops at a red light, followed by a certain “dislocation” the moment after. Tremblay invites us to find beauty in this disarray. He does it by composing very extreme dynamics into the fabric of this work; Wet Ink Ensemble are required to play very difficult, layered and busy music, teeming with activity, and then further required to shift direction at the drop of a pinwheel, executing tricky time-signatures, weird intervals, and many other representations of elegant urban chaos. Once again, the precision of their playing when faced with what I would regard as a near-impossible task is uncanny; cohesion, and a strange beauty, emerges from the music.

An excellent record which is highly recommended. From 21st August 2020.