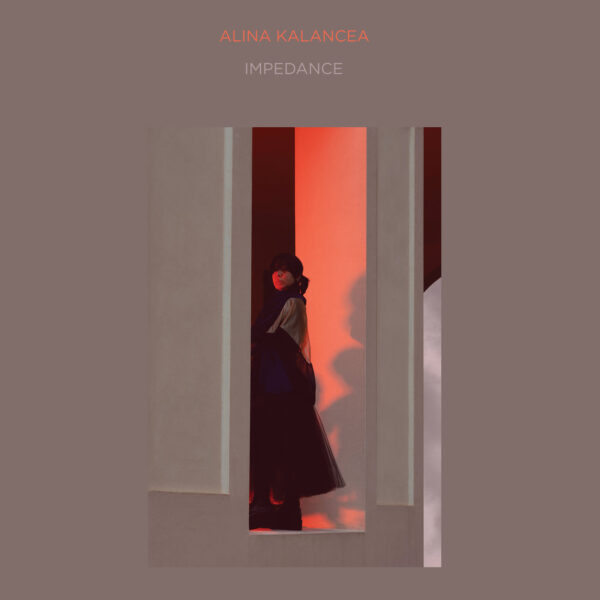 Here comes an album of entirely instrumental music performed on Buchla synthesisers (named after Don Buchla, an inventor and early pioneer in electronic musical instruments and their manufacture, working independently of Robert Moog in the 1960s) by Romanian artist Alina Kalancea who started her career as a composer of electronic music in 2012 and has been working to develop her own style and sound through studio experimentation and live performance since then. “Impedance” is Kalancea’s second solo album after “The 5th Apple”, released back in 2018 on the Störung label.

The album’s title not only means hindrance or impediment generally, but more specifically refers to the measure of the total opposition that a circuit presents to a current when voltage is turned on. In some definitions of “impedance”, it is the measure of the total passive opposition to an alternating current. On this album though, “impedance” might be taking darker meanings and expressions, with sparse, all-electronic music of pulsating rhythms and loops: these call attention to vague atmospheres and soundscapes lying beyond them yet seem to act as gatekeepers in allowing or preventing listeners’ access to these worlds by insistently clamouring for your attention. These pulses, often teardrop-shaped and dripping like water, can be very hypnotic and eventually you end up giving into them.

In spite of their very sparse and often minimal nature, the ten tracks here are very carefully crafted. “Walking through Storm” is perhaps the busiest track with layers of rhythm loops, pulse rhythms and drones carrying on a rapid conversation all at once. I find the shorter tracks like “Walking …”, “Abandon All Hopes” (which includes samples of singing) and the title track more interesting than longer pieces, perhaps because they are much more compact in the variety and depth of their sounds and the sonic landscapes they conjure up. The long tracks can be a bit monotonous due to their dependence on pulses and repetition as they gradually evolve and escalate into elaborate yet delicate structures that can stretch and change continuously over a number of tracks.

The music ends up pushing through what might once have been considered separate genres: what might be called “dark ambient” is apparent in the longer pieces that come after the album’s halfway point while earlier music is closer to techno and dub in tone, structure and mood. Much of the album seems to describe a very dystopian future world of techno surveillance, more through nanotechnologies that might invade the electronics we use daily, the transactions we make or even our bodies with microchips or injected nanobots, than through external panopticon-type devices and methods, though of course I allow that my own paranoiac tendencies might be influencing my listening while this recording plays.

The last track on the album is a tribute to mid-20th-century Romanian singer Maria Tanase (1913 – 1963) who was a contemporary of, and equivalent to, the French singer Edith Piaf (they even died in the same year, almost six months apart) in the impact that she had on popular music culture in her country; the track itself samples some of Tanase’s singing and a message about cultural continuity or loss in a world where digital technologies, subject to continuous changes and modifications on the whims of profit-seeking corporations, are becoming dominant may be present. Certainly the inclusion of a sample of Tanase’s singing in an album of mostly electronic music might itself represent an act of “resistance” which brings listeners back to the album’s title and the other forms of resistance present in the music. The inclusion of Tanase’s singing becomes even more significant when one reads about her life and discovers that she was an opponent of the pro-Hitler government of Ion Antonescu during the 1940s.

I can see this album gaining more stature in the future than it might have this year: it is a complex beast that repays listening (even with its flaws and the boring bits) over time with music that defies categorisation. “Impedance” might very well become a classic of its kind and the benchmark by which Kalancea’s work in the future might be judged.