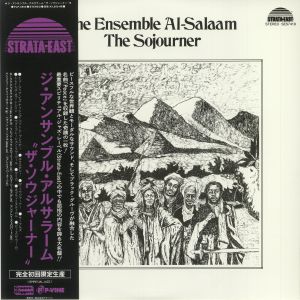 As far as I can tell, this 1974 release may be the only recording put out by the soul-jazz group The Ensemble Al Salaam during its lifetime. The album was reissued last December by Japanese label P-Vine. The music’s style – soulful jazz pop played on an astonishing range of instruments with plenty of virtuoso playing and improvisation within song formats – and its theme of a spiritual as well as physical quest for love and peace to all humanity may be very much of its time (mid-1970s) but it sounds very fresh, inspired and exuberant even more than 45 years after its making and release. The outstanding aspect though of the whole recording may be its lead female vocalist Beatrice Parker whose singing, untutored though it was and occasionally hitting dud notes, simply soars to the heavens and far beyond with feeling and passion. The opening track “Music is Nothing but a Prayer” showcases the singing and the instrumental passages with extended saxophone and piano playing extremely well and is very much worth the price of the album alone. From its slow, almost ethereal start with the voice flying over mountains and valleys, the song quickly becomes busy and complex with all musicians on fire blasting away on sax and tripping up and down the ivories – and Parker in her own trance world leads the way to more transcendental paths with her extended wailing.

“Ecstacy” (sic) features more brilliant singing though much more minimal music backing. From then on, the music regains some of its footing on earth and the band settles into experimental jazz pop with flashes of instrumental virtuoso brilliance. The inclusion of flute on tracks like “Circles”, duelling with the singer, reminds me of English ’70s folkies Comus though Comus of course with their pastoral fairy tales of underlying sexual savagery and incipient madness are nothing like this band with its message of peace, love, hope and harmony among humanity. There are some good all-instrumental jazz improv pieces in the middle of the album and while the musicianship can be outstanding, without Parker’s magical vocals the tracks basically just fill in time. The album perks up later on with “Malika”, an inspired runaway instrumental track with Parker ululating at the top of her range and various solo instruments get high in their own trance universes. “Optimystical”, a duet between Parker and pianist / singer Bevin Turnbull, seems mawkish and cheesy but listeners might very well warm to this unabashed pop tune after all the intense musicianship that has gone before. The album closes with the melancholy “Peace” which ill-suits the band with its slow and lumpen pace and Parker’s off-key delivery in parts, though it does speed up in the middle before an unexpected long period of silence.

Befitting its title, the album is a work of many moods and musical adventures and explorations, and I suppose in a way its very eclecticism hindered its acceptance by audiences back in 1974. Jazz fans would have found the forays into pop rather lowbrow and pop fans would have been confounded by all that experimental tearaway improvisation and absolute guitar and woodwind shredding. “The Sojourner” really was far ahead of its time, maybe even too much so, so perhaps we shouldn’t be surprised that nearly half a century had to pass before the album receives well-overdue acknowledgement as a singular and remarkable achievement, warts and all.