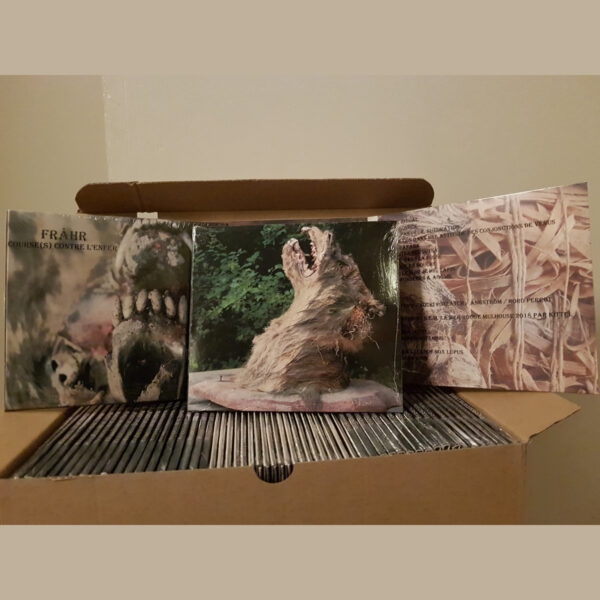 Another bizarre record of grotesquerie, ugliness, noise and absurdity from the micro_penis gang in France…this time we have an all-new collaborative project called Fråhr which appears to consist of all the members of micro_penis, plus Youri Potlatch, Ångstrom, and Roro Perrot. It’s hard to be sure about who’s playing what when faced with a string of crazy alias names, but from the Discogs page it seems that Yves Botz of Dustbreeders is here playing guitar, and some of the electronic mayhem is supplied by Grégory Henrion, another “harsh noise wall” advocate who sometimes calls himself Belle Confusion. That particular noise sub-genre is something that Romain Perrot used to own and occupy when he traded under his Vomir alias, but he’s since evolved into a far more interesting all-rounder of crazed outsider racket, as is evidenced from any of his more recent solo / duo releases on Decimation Sociale.

Today’s Fråhr item, called Course(s) Contre L’Enfer (DECIMATION SOCIALE DSCDFRAHR), isn’t so much of an all-out noise assault as an exercise in dismal futility and post-Dada nonsense, with weird and inexplicable sounds distributed like so much garbage across a playing field. Voices are one prominent feature, as I’d expect; demented, insane groans and gibbering have been a feature of many recent micro_penis and Ogrob-related projects we’ve heard, and Perrot is likewise himself a past master of the incoherent bellow and the formless howl dredged from the wastelands of madness. Supporting these yawps, we have semi-musical murmurs and unpleasant ill-formed blobs of acoustic noise, creating a lunatic world where nothing is recognisable or remotely normal. To further the sense of complete cerebral breakdown, the 10 track titles are brilliant exercises in scrambled automatic writing, producing effects that are surrealist in tone, yet also filled with an underlying contempt for any reader foolish enough to look for meaning in these disjunctive phrases. It’s that streak of nihilism, going far beyond even the most despicable and hostile form of punk rock, that is one of the trademarks of Sebastian Borgo’s projects.

Lastly we also have the distressing cover art, which I think features photographs of an Ogrob sculpture. Cathartic and unsettling material here; listen at your own risk, as the sheer insanity of this hideous noise may appear harmless at first (it has an unsettling quiet, and muffled aura), but it gradually gets under your skin in an invasive manner. I think this arrived 20 July 2020, along with the new micro_penis LP.