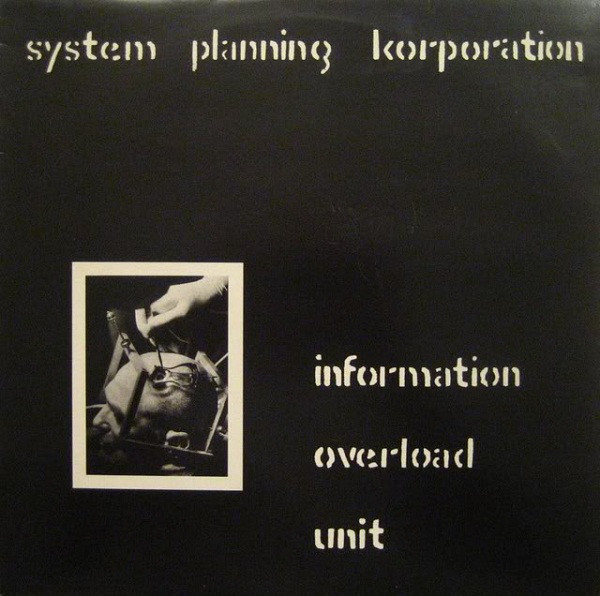 Lord a’mercy … it’s been 40 years since this album was first unleashed upon unwary listeners by the Australian industrial band SPK and in spite of the long passage of time, and all the changes the world and in particular the commercial music world, and also the non-commercial / alternative / underground music world, have undergone, “Information Overload Unit” still retains its bite and ferocity as a recording of what we’d now call pure noise and industrial. For those not familiar with SPK – the name is not really an acronym, though the band did make fun of people who wanted to know what it meant by offering an alarming choice of often unprintable names like SepPuKu, Surgikal Penis Klinik, Systems Planning Korporation and the more usual Sozialistisches Patienten Kollektiv – the band was formed in Sydney by New Zealand immigrant Graeme Revell and Neil Hill in 1978. Both were working at Callan Park Hospital for the Insane, and discovered a common interest in the manifesto of German Marxist radical group Sozialistisches Patientenkollektiv, founded at the University of Heidelberg’s psychiatric hospital in 1970, whose ideology revolved around the notion of illness, especially mental illness, as a condition caused by the capitalist system, and which could be embraced and used as the tool to bring down the medical establishment, and with that class, the elites that relied on Western medicine and its worldview and values to maintain control over people whether sick or not. (In the current COVID-19 pandemic environment, the idea that a disease can be used to shock and terrify people, so as to bring them under some form of centralised control, render them psychologically vulnerable and willing to give up civil liberties, and even persuade them to accept novel technologies that in the long-term could actually harm their health, is starting to seem not so outlandish after all … and all the more terrifying as a result. The question that has to be asked though is … who are the sick, and could the people who control our major political, economic and social institutions be the ones who actually are the sick?) In 1971, a shooting incident at the police station in Heidelberg was blamed on the radical Baader-Meinhof group and police began harassing the members of Sozialistisches Patientenkollektiv, raiding their homes, arresting people (including the organisation’s founder) and dealing with them violently. The organisation dissolved in the same year and was re-founded in 1973.

The album has been re-released twice in 1985 and 1992 (the second re-release was by The Grey Area, a sub-label of Mute Records); a third re-release in 2021, the 40th anniversary of its original release, perhaps with remastering, would be very welcome indeed but at present is wishful thinking on my part. At the time of its original recording in 1981, original founder Neil Hill had already left the band and SPK had relocated to London as a four-piece band. The original front cover artwork would scare away most people for a start. The music, composed from feedback guitar, distorted synthesiser and drum machine programming, plays like a soundtrack to an underground film made specifically to break down people’s minds and sense of reality with its deliberately confrontational stance and use of chilling spoken-word samples. (SPK co-founder Revell was to find his eventual niche scoring music for Hollywood films: talk about, er, selling out!) Tracks like “Emanation Machine R. Gie’ “, “Suture Obsession” and “Ground Zero: Infinity Dose” probably predate Merzbow’s use of noise as a continuous high-pressure hose of sound immersion; the last-mentioned track also features distorted vocals and a continuous shrill drone of the kind Whitehouse would make their own. The most song-like track on the album turns out to be the stuttery mind destroyer “Stammheim Torturkammer”, an experiment in using chopped-up drum rhythms overlaid with guitar feedback and distortion to create an actual tune; at the other extreme is the track immediately following, “Retard”, a quiet yet busy piece of machine rhythm loops and found “voices” both human and computer. The album closes with the sinister, coldly ambient industrial “Kaltbruchig Acideath” through which a spoken-word recording is threaded.

After this album, SPK would move in a more commercial music direction, much to its own detriment; by the late 1980s, the group had become more dance-oriented synthpop with the occasional experimental outburst before being retired some time in the early 1990s when Revell and then fellow member Sinan Leong relocated to Los Angeles. At least SPK’s early works like “Information Overload Unit” still survive on Youtube where unsuspecting browsers like me can blunder into them and listen to them anew.