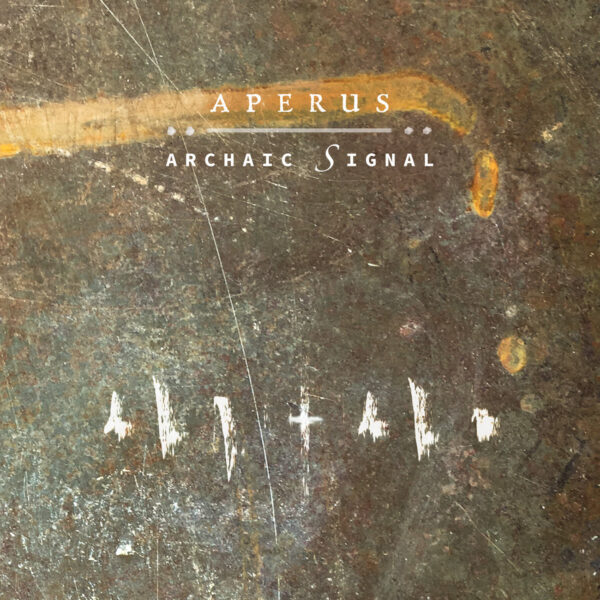 Excellent set of well-crafted ambient hazoid music with field recordings and shortwave radio samples from Aperus...this is Brian McWilliams from Santa Fe in New Mexico, and Archaic Signal (GEOPHONIC RECORDS geocd05) is the latest instalment in a series of releases on his own Geophonic Records label since around 2013, although the story starts in 2003 with the record Tumbleweed Obfuscated By Camera Failure. Before this, McWilliams was one half (with John Phipps) of the duo Remanence, who made an ambient record Apparitions for Cold Spring in 1999.

McWilliams does most of the work on this album himself, and is credited with realising sounds from numerous devices – a number of synths and workstations, plus radio, field recordings, and tape manipulation; plus he did the mixing himself, assisted with the mastering, and did all the photography and editing. Guest musicians who help out are Ivan Block (guitar on two tracks) and Karla K. McWilliams (drum loops and samples on one track), but this is mostly Brian’s vision. What comes over within seconds of hearing this work is the care and attention with which it’s been recorded and assembled; there’s a lot of gravity and import in the sound, and not a single sound element appears without having its place in the grand schema. You’ve only to read some of the accompanying notes to appreciate the devotion with which Brian McWilliams pursues his artistic goals; for one thing, a project can be labour intensive work that involves a lot of travelling and walking, collecting materials; for another, it takes some time to complete, and work on this project for instance started in 2018.

The artist has some affinity with the landscape near where he lives – this record appears to be centred on the La Cieneguilla petroglyph site in Santa Fe, which boasts many early Pueblo carvings and inscriptions. He seems to have experienced some sort of epiphany when gazing on these pre-Columbian images of birds, hunters, and musicians, taking them as “viable signals still holding a charge”. This impression came to him again while listening to birdsong near his home, sounds which he recorded and added to the work; further metaphors for these ancient “signals” are expressed as short-wave radio samples and segments. The whole of Archaic Signal is layered and overlaid with content-rich sources, and assembled as a kind of audio palimpsest. While his other releases (not heard by us) may aim to present a strong sense of environment and specific locations, Archaic Signal is focussed on getting to the bottom of these mysterious signs, ultimately depicting something unknown and intangible. The artist works hard to convey a sense of mystery, without retreating into a vague ambient haze or indulging in silly speculations about outer space visitors, and the record is honest, personal, compelling and convincing.

With his interest in early artwork and different cultures, Aperus isn’t too far apart from Rapoon (who he cites as one of his many inspirations), and he achieves a similarly rich and layered sound-world. Very good. From 28th October 2020.