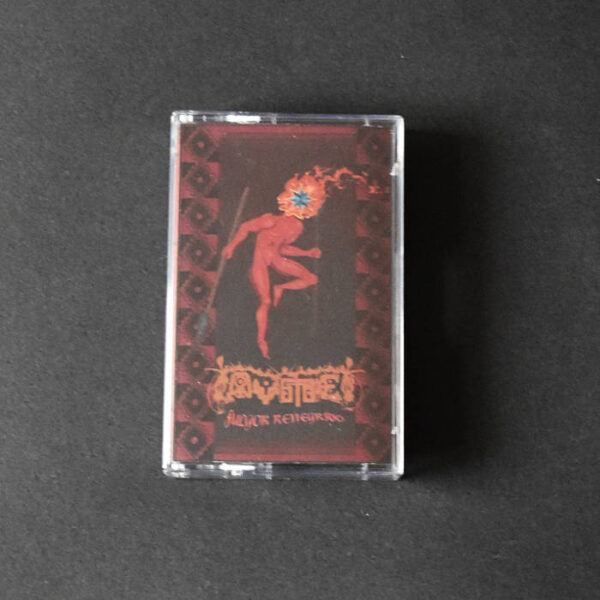 Based in Coquimbo, in north-central Chile, Aume is a solo atmospheric black metal / dungeon synth / Andean folk project that’s been active since 2016, issuing singles and EPs most years until May 2020 when its debut album “Fulgor Renegrido” finally came out as a digital release. The album was picked up by Edinburgh label Ancient Entity Records for a physical release in cassette format of 50 copies in February 2021. Right from the very start, this album is a singular beast indeed and I foresee that in future years Aume will have quite a loyal, even fanatical cult following. After all there can’t be very many black metal bands incorporating a mix of dark mediaeval-sounding dungeon synth music, doom, sludge and a bit of death metal into their style and still have room left over for … Andean country and western music!!!

The songs initially come across as a morose blend of dark country and western / blues with blackened elements such as the ghostly rasping vocals, roughened tremolo guitar tones and a cold frigid atmosphere (most pronounced in the track “Mas Alla del Melimoyu”). The mediaeval-sounding folk melodies are strange for this style of music and add to the sense of alienation, of the music and its creator Averso Yekamush being very much on the margins of Chilean society. Even the percussion, unusually emphasising work on the cymbals and sounding quite intimate as a result, seems very odd here. Everything that would be familiar to listeners in other contexts comes out sounding very eccentric on this recording. Songs tend to be fairly simple in structure and minimal in the mix of instruments used, relying heavily on repeating guitar riffs or synth melodies while ghost voices gabble over them, but the riff and melody loops are so glum (especially on early tracks like “Ante el Tempano”) that they etch themselves deep in your brain somewhere.

Just when you think the music couldn’t be any more strange than it already is, Yekamush takes it to another level on “Hueste Tonante” with Andean folk music instruments like panpipes and the music almost becomes a soundtrack to a desolate Chilean empanada western in which a posse might be traversing hundreds of kilometres of barren desert under dark evening skies in search of a serial murderer and finding nothing but dried bones of men and horses who died ages ago while on the run from justice. This sense of desolation and bleakness continues in “El Despertar de las Sierpes” with frightful-sounding field recordings of ancient pterodactyl monsters, sinister bone rattle noises, equally ominous spoken-voice recordings and samples of choirs joining the death-rattle vocals. Yekamush keeps the core music as minimal as possible so that songs end up dominated by layers of voices doing battle against each other, against a huge dark space and gloomy atmosphere. Mouth harp echoes, a brass instrument and sombre spoken-word vocals enhance the sense of extreme otherworldliness and an isolation so desperate that listeners feel the immense pain of it.

The most memorable tracks are “El Despertar …” and “Peripillan”, the later track being at once the most raw atmospheric BM, the most dark synth ambient and the most Andean-style C&W in its style – you really have to hear it to believe me – but most songs on this recording stand out in one way or another for their bottomless melancholia and gloom. Putting organ on “Peripillan” is just piling on the punishment for listeners. In some parts the music can be too repetitive, monotonous and even a bit banal, “Perpetuo Ascenso” being a forgettable song in this respect, and the closer “So’ohn Kas Pemer” a very disappointing finish to an otherwise striking and highly oddball black metal fusion recording.

This is an album that fans of unusual and experimental black metal / folk fusions should hear at least once in their lives.