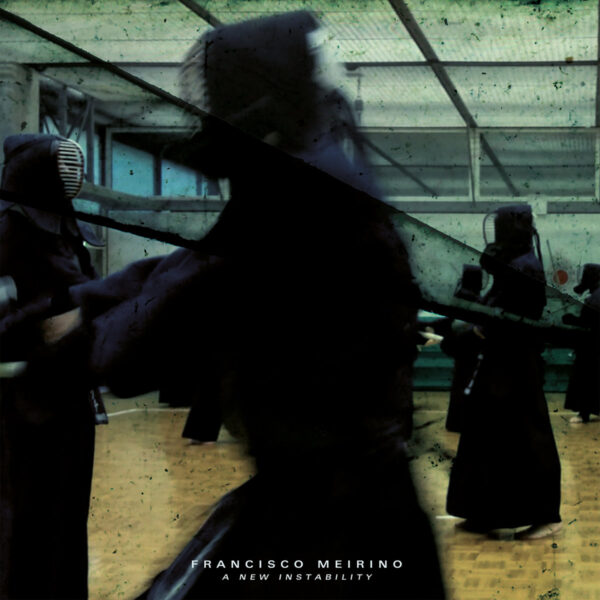 Originally a much larger 32-channel sound installation work commissioned by the Paris-based electro-acoustic music research centre INA-GRM (the artistic director of which is François Bonnet of the Kassel Jaeger music project) in 2019, “A New Instability” has been slimmed down for a limited edition vinyl release by The Helen Scarsdale Agency label. This version combines the piercing minimal brutalist noise electronics of the original recording with field recordings of what appears to be a kendo (Japanese swordfighting with bamboo sticks) practice session taking place in Meirino’s hometown of Lausanne in Switzerland. The shrill raw noises can be highly confronting and insistent – you simply can’t ignore them for very long. On Side A of the vinyl release, the sounds are so piercingly high and throbbing, you could very easily get a headache. A couple of tablets, a glass of water and maybe a couch or a bed to lie on are recommended if you haven’t yet heard this album. Don’t worry, there’s enough variety in the sounds – bubbles, whistles, squeaks and what appear to be background industrial-styled knocks and creeps – that this part of the recording turns out to be more enthralling than enervating. The noises become softer and more subtle as well so the work isn’t all one-dimensional sonic-screwdriver torture.

The field recordings of the kendo fighting sessions can sound a lot more ferocious than they actually are, with the sounds of thudding sticks and muffled shouts melding with the rhythms in the music and slivers or squeals of noise that Meirino introduces into the mix. The field recordings and the noise electronics proceed in parallel rather than mix and merge, and any interplay or dialogue between the two sets of sounds sometimes seem coincidental. This parallel journey does however set up a rather tense mood in the electro-acoustic soundtrack and at any moment the soundtrack could break into a flood of noisy drone breaking its invisible restrictions. Even at its most serene and composed, the music can seem on edge as the shouts and cries of kendo students, and the constant rattle of their bamboo swords and sticks, keep up a continuous counterpoint to the spaced-out noisescapes. At the same time the recording exercises an enormous amount of restraint to keep those noisescapes and the kendo field recordings from attacking one another and causing mayhem throughout the recording.

While the recording lasts, the electro-acoustic soundtrack and the kendo fighting can be an intriguing combination demonstrating how instrumental soundscape works can be influenced by particular contexts and how the combination of the two in turn impacts on and manipulates listeners’ moods and feelings. The recording might have been more interesting if there had been some ebb and flow in the volume of both sets of soundtracks so that one appears to dominate the other, and that would have made the work more interesting, varied and richer for the listening experience.