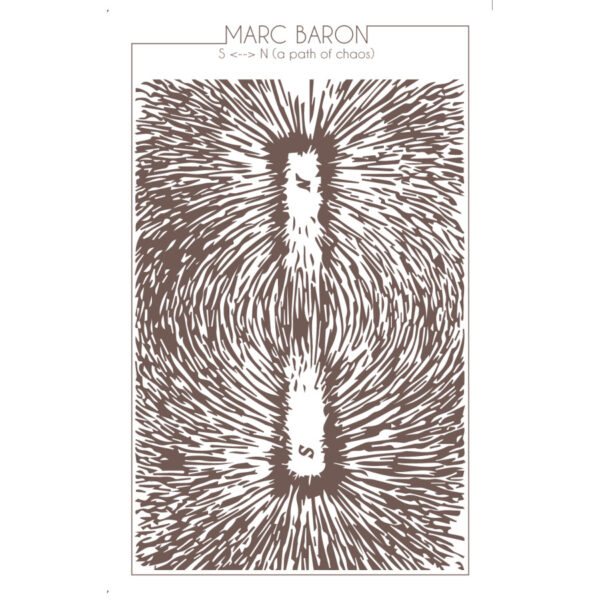 Got a couple of good cassettes from the More Mars label in Rethymnon, Greece.

Marc Baron has made S<–> N (A Path Of Chaos) (MORE MARS MM29), a title whose potential is clearly illustrated by the magnetic poles and waves of magnetic energy on the cover illustration. We’ve heard this French composer (and saxophone improviser) a few times in the past, mostly on the Potlatch label with Hidden Tapes from 2014 and Un salon au fond d’un lac from 2016. Both reviewers of these picked up, however tangentially, on the “magnet” thing that is evidently one of Baron’s tropes. Before this we heard him as one half of Narthex on a 2009 release Formnction.

Two long Baron compositions on today’s tape, starting with ‘Napoli’s tapes’ on the A side, a meandering melange of field recordings, found materials, and process noise, assembled in a mildly surreal semi-narrative fashion; engaging, though not especially adventurous or original. Even so I do like the muzzed-out balmy feel, the way that sounds refuse to let themselves be recognised or identified, and Baron refuses the “shock value” trick of wild cut-up juxtapositions, even though he’s probably editing and multi-layering like a wild moth with a tube of toothpaste. ‘Magnetic Mask’ on the flip is quite a different coffer of piastres. He’s doing something called “over-polarisation”, which I suspect is another way of saying that’s applying the dreaded magnet to his own tapes, a trick which badly disrupts the particles on the tapes and can often wipe a tape completely.

Here Baron is taking his own composition from the A side and effectively destroying it, allowing us to enjoy the sound of that process as it happens. Net result is a whole freightload of tape hiss, but there are also traces of original sound-art and music bleeding through as this happens, along with other elements. Much more process-heavy, natch, but not especially noisy or aggressive; and probably not quite as radical as he would like to think it is. However, there’s a certain symmetry in the idea of presenting your work in this way, an original composition on one side and its wiped-out brother on the other. I like the use of the subtitle “Erasure is not enough”, which has a menacing edge fit for a Jams Bond movie, as though Marc Baron were acting as his own assassin. Karen Constance is the lovely Scots genius often heard on the Chocolate Monk label and often seen when she produces colourful, subversive and surreal paintings as Karen Lollypop. Don’t think we’ve heard from her since The Larval Tuning Fork (& Other Visions), the 2012 LP from Blood Stereo. She has made a six-track item called Still Asleep (MORE MARS MM28), with no song titles and a faintly unsettling witty collage cover. This is all done with tape loops, working with recordings of electronic instruments, synths, and (sometimes) voices; everything emerges as slightly odd and skewed, and in her own playful manner Constance manages to sap the listener’s sense of normality. She’s also quite a maximalist, and these cluttered-crowded tape escapades reward you with plenty of cheese for your pesos, serving up many diverting and tasty sounds, often poised between the humourous and the serious. I’d like to think she uses tape, and the tape recorder, like a paintbox; almost manipulating the sound in a plastic fashion, and delighting in timbral shifts like unmixed primary colours.

In other circumstances, it’s just possible Karen Constance could have found a home on the Ghost Box label, except she’s clearly not prepared to play the “false nostalgia” game or dream of daytime TV incidental music; even as some of her music here sounds like a more demented version of the Bleep and Booster incidental sounds. Likewise, she’s not aiming at wacky tape edits of familiar material to constantly trip up listener expectations, like People Like Us; instead, Still Asleep is 100 % original, rugged and wild tape music, creating basic abstract patterns, using the power of tape loops to seduce and disturb. There’s a companion tape with the title Still Awake released in the UK on Beartown Records, also released in 2020.

Both the above pressed in editions of 80 copies, and arrived 28th October 2020.