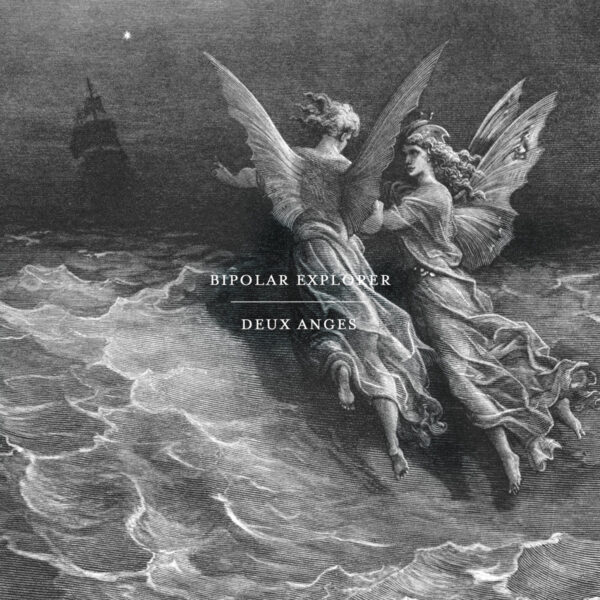 New double-CD album from Bipolar Explorer is Deux Anges (SLUGG RECORDS Slugg024CD). We heard from this NYC group in 2019 with their album A Dream Of Christmas, which was unusual for its selection of obscure and little-known Christmas songs and carols from history, sung in both English and French.

This time around it’s all original material, but the group continue to deliver their unique brand of very understated guitar-pop with subdued vocals, hazy ambient melodies, and the singing voice of Michael Serafin-Wells kept deliberately quite low in the mix. Sylvia Solanas is here again, supplying spoken (or rather whispered) vocals in her own French language; she also translates some of the songs into French. But the (absent) main member of the band is Summer Serafin. This was Michael’s partner who died nine years ago, and since then it’s been Michael’s mission to keep the project (and her memory) alive, mainly by drawing on his personal archive of recordings of Summer’s vocal tracks. This particular release is bolstered by the inclusion of a book full of monochrome photos – lonely forests, ruined buildings, empty seascapes – and all the lyrics. Some instrumentals, some tunes enhanced with field recordings, some more like recits than songs; all of Deux Anges is steeped in a very wistful melancholy, a poignant longing for that which can never be regained. Also we continue to find allusions in the lyrics to the afterlife, heaven, angels, mortality, ghosts, miracles…and Christian virtues, such as compassion, empathy, and hope.

At two CDs and three hours, there’s also a lot of it to listen to, but BPX (as they abbreviate their name) never outstay their welcome with their unassuming tone, the gentle lulling pull of their mesmerising one-chord (sometimes two-chord) songs. The group are not out to stress the Christian religious dimension to their work, but even so with this low-key musical mumbling, Michael’s lyrics emerge as a form of prayer, personal and humble in tone; while Sylvia’s no-nonsense recits feel like sermons, delivered in a concise and crystal-clear manner. I also like that the record was made quite quickly, and is not “over-produced” with too many layers or retakes or fussing over the finished product; so in case any of this description makes you think of records by The Cocteau Twins or Kate Bush, you should think again, as I believe that Michael Serafin-Wells probably adheres to the true indie spirit of live recording, keeping in the rough edges, using the first take, and then moving on. From 30th October 2020.