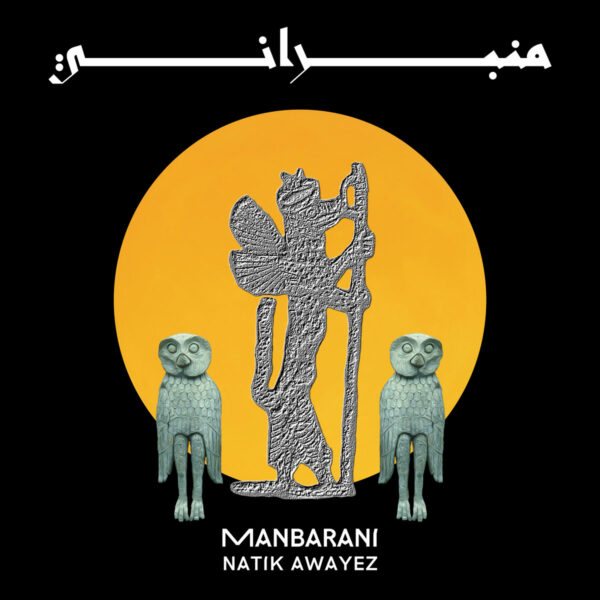 It seems astonishing that a composer / lyricist / oud player like Iraqi-born Egyptian resident Natik Awayez whose career spans four decades across several countries (Egypt, Yemen, Sweden among others) should have released his first solo recording only very recently, in digital form in November 2020. Fittingly perhaps, “Manbarani” describes a journey of a displaced person trying to find his physical place in an ever-changing universe and at the same time running a parallel spiritual journey establishing a relationship with God, one that includes love and a sense of connection with wherever he finds himself. For this album, Awayez chose musicians from across the Arabic-speaking world with Egyptian and Lebanese musicians dominant among his players. Awayez himself plays oud and sings, with Ayman Asfour on violin and viola, four musicians on percussion, Tamer Abu Ghazaleh on buzuq (a long-necked fretted lute related to the Greek bouzouki and Turkish saz instruments) and various female backing vocalists.

The music is very flowing and expressive Arabic folk music, performed in a sparing minimal style that emphasises the singing, the winding sinuous melodies and the distinct rhythms that just seem to go on forever and ever. Awayez is not a virtuoso singer and the music’s style – efficient and unembellished – is suited to his voice; moreover the minimalist style lends the music and singing an intimate quality. The overall sound can be a bit on the sharp, tangy side but it is never raucous.

Overall the album does sound a bit conservative with few surprises if any; the musicians don’t go for extended solo improvisational breaks or jamming, and once a song’s pace and rhythm are established, these usually don’t change much during the song’s duration. Song titles suggest an ongoing odyssey both physical and spiritual, the protagonist perhaps reflecting on his past experiences travelling by both body and mind, and how such experiences have shaped him in his quest to find his place and purpose in the universe. The outstanding aspect of the album, one that will remain with listeners long after it ends, is the floating and ethereal quality of Awayez’s voice, filled with longing as it soars over the music and the undulating landscapes it creates.