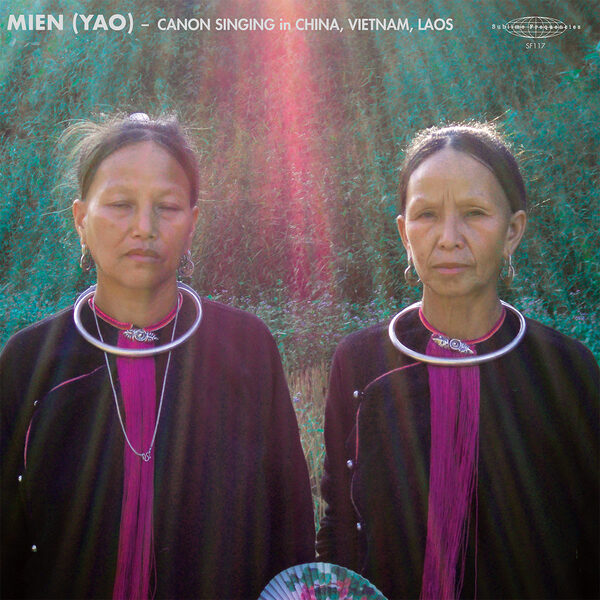 In mountainous parts of southwestern China and in neighbouring areas of Laos and northern Vietnam live hill tribes collectively known as the Yao people, of whom the Mien tribes are the largest group, speaking languages of the Hmong-Mien language family. The Mien have many sub-groups which are defined according to the colours of each group’s traditional clothing. Over the past 20 years, since basing himself in Dali, in Yunnan province in southwestern China, musician / field recording artist Laurent Jeanneau aka Kink Gong has been recording the music of various ethnic minority groups in Southeast Asia and in southern China in particular, and among other releases he has made (numbering over 160 albums), he recorded and produced in the field these songs, three of them sung entirely without musical accompaniment, by groups of Mien / Yao performers. The first three songs are performed by duos of singers in Laos and China with no accompaniment, and the last song is performed by what appears to be a group of singers and musicians in Vietnam.

The four songs are slow and solemn, and each of the three songs that are sung a cappella feature two singers who match each other closely in tone, pitch and tempo, with one sometimes following the other. The singing is usually very drawn out and (to my ears) seem to parallel the long droning throat-singing of Mongolians, Buryats and Tuvans, or the melismatic singing of Arab classical music in which virtuoso singers can string out one syllable up and down the scale for what seems like forever and send audiences into a frenzy. On the first song “Lan Pan Moon”, Laotian Mien women singers Keo and Na match each other word for word, tone for tone, pitch for pitch, as though they have a telepathic connection or have sung together in the way they do since they were small children. The range of notes they sing is not great so over nearly 20 minutes of singing they can sound a little monotonous. Background birdsong seems not to have much influence on them and sometimes they sing as if they are both in a trance.

Likewise the two shorter songs from the Chinese Mien duos (Deng Fu Mei and Zhang Wu Mei / Yang Chun Jin and Yang Bao Cheng) also appear very hypnotic and quite unearthly, and in each duo the singers mirror one another closely. It’s possible that in each duo also the singers may be related to each other or at least have sung together for such a long time that they are able to anticipate what their opposite numbers will do, even if one of them improvises (which is possible). The second Chinese Mien duo Yang Chun Jin and Yang Bao Cheng may be a married couple, or siblings or cousins.

The fourth song is, again, a solemn and dignified affair with cymbal-like percussion setting the tempo and a singer or singers intoning very long syllables in a way that seems reminiscent of Tibetan or Bhutanese folk and religious singing. The singing and the music seem focused on matters most heavenly, and if the singers continued any longer, the clouds above them might part, the skies open up with radiance, and a glowing path of rainbow colours to the realms of the gods would appear before them. The women would step on it, the path would lift them up and all would disappear into the skies in a blaze of wondrous light, with only the women’s singing far above their compatriots’ heads the only reminders that they once walked the earth. However in the background of the women’s singing, people are laughing and having a ball so perhaps the singers and the subject of their song are more grounded in earthly affairs than their singing might suggest.

The recordings would be of interest to people keen on different vocal traditions in other cultures, and on how people sing together in groups without Western concepts of harmony. The limited edition LP release comes with liner notes by Jeanneau that describe the four tracks in detail.