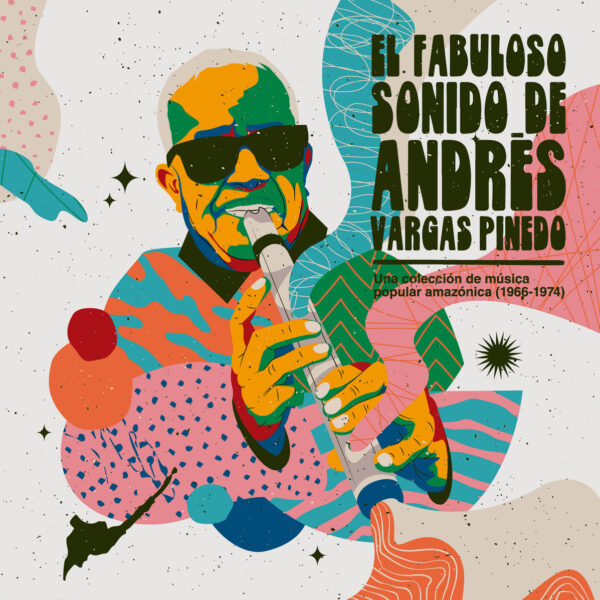 Here is a very light and lively compilation of 15 songs by Peruvian composer / musician Andrés Vargas Pinedo from his first two bands, Conjunto típico Corazón de la Selva and Los Pihuichos de la selva, which were active between 1965 and 1974. These songs and Vargas’ early bands helped to define Amazonian popular music which drew on Latin-American Western styles and instruments and indigenous music styles, instruments and other influences in the countries where this music was popular (Brazil, Colombia, Ecuador, Peru). Vargas is a blind musician who plays both quena (a flute-like instrument native to the Andes region) and violin, and his considerable skill improvising on both instruments is demonstrated to the full on all songs on this compilation.

The songs on this album have a playful air and infectiously danceable melodies and rhythms. Some tracks even sound a bit like sea shanties with their bouncy, jovial violin melodies and much hand-clapping and foot-stomping accompaniment. A lot of it sounds like Irish folk music and may share in the qualities that make that music across the Atlantic so distinctive. The music may very well express the spirit of the Amazonian communities and their love of having a party and celebrating life, in spite of the hardships they have had to endure over centuries. There is something in Vargas’ flute playing that suggests defiance, endurance and laughter in the face of adversity. Certainly on some tracks, like “Puntacacho Tutacacho”, the flute playing reaches virtuoso heights in urgent folk music that sounds as if it is braced against harsh mountain winds.

The shrill, piercing notes of the quena may not be for everyone and perhaps the music sounds a bit quaint for those reared on electro-disco and techno versions of Latin-American dance music – but there’s no denying that this music is highly expressive and tells us something of the indomitable nature of the people who developed this style of music and who are ever ready to have a good time and enjoy themselves no matter what life throws at them.