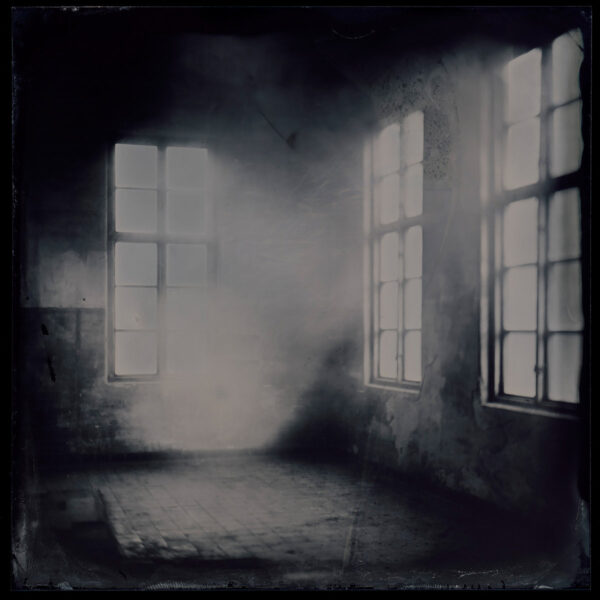 Based in Stockholm where he partly works as a teacher of composition, sound synthesis and advanced spatialisation in the Elektronmusikstudion (EMS), Granström is a composer / sound artist who composes electronic music using algorithms and processes that introduce an element of chance or randomness, with sounds of both synthesised and acoustic origins. He has collaborated in the past with fellow Swedes Maria Horn and Mats Erlandsson, both of whom had solo recordings released by Swiss label Hallow Ground in 2020. On “Empty Room”, his first solo work, Granström creates slow, powerful yet radiant droning works using sound sources generated on his guitar while playing on it in Ställbergs Gruva, an abandoned iron ore mine in Sweden’s Bergslagen region as part of a musical residency there, and later re-amplifying the sounds and refining them with algorithmic and aleatoric processes using the SuperCollider coding and programming language.

The five soundscape pieces on offer seem huge and vast, and probably not a little remote for some listeners, yet possess grace and ease as their details continually change, blend and merge. The mood can sometimes be warm and even radiant, and rarely seems threatening; the darkest it ever becomes is an indifference to us little beings and our activities. For all its stunning power and ringingly loud drones, at the same time the music offers softer, more delicate sounds in its backgrounds. An excellent example and early highlight is “Aeon” which like its title seems to stretch on forever and ever, seemingly resistant to erosion yet changing of its own free will. By contrast “Sapphire Visions” is a more fleeting piece, sorrowful and even a bit pained in mood, with actual guitar chords standing out against sighing ambience.

“Occultation” is another massive track with sounds reminiscent of the rich pointillist metallic droning of US sound artist Maryanne Amacher (1938 – 2009) in works like “Sound Characters (Making the Third Ear)”. The mood here is definitely on the forlorn side yet even on this track the sounds are lush and have a glow, even if slightly chilly. “Transience” is a gentle closing piece of mournful raindrop guitar tones contrasted by crashing guitar chords in a shadow background while soft noise and tone murmur around them.

At once warm and radiant, gradually falling away perhaps to melancholy and feelings of abandonment and longing, and combining loud and powerful, even crushing, drones with the most delicate guitar melody loops, Granström’s debut solo recording surely heralds the start of a considerable solo career in creating seemingly complex immersive musical works.