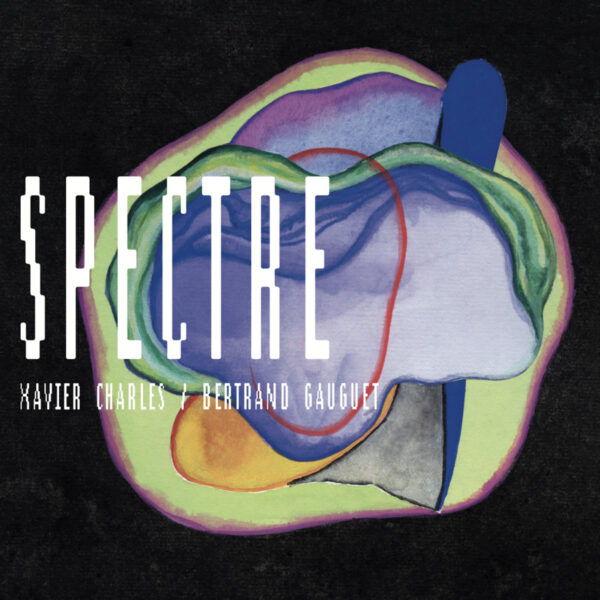 Charles and Gauguet’s Spectre is the inaugural release on Akousis Records and consists of a chunky bunch of haemoglobin from two sessions; one at Césaré in Reims in 2017, the other at Pied Nu in Le Havre in 2015. Xavier Charles performs on acoustic and/or amplified clarinet, while Bertrand Gauguet weilds an acoustic and/or amplified alto saxophone.

The duo get off to a great start with “Phonomnèse 1” by avoiding all well-trodden improvised jazz tropes and instead play eight minutes of slow blown overtone music. Great! This is just what the doctor ordered. I’m probably not alone in using some of the ample free time 2020 has gifted us during the Lockdown period(s) to research some music I might have not come across before or otherwise missed, and I have to say I’ve found the broad genre of “ambient” – of which I had only a cursory and surface understanding of previously; being a fan of Brian Eno, Tim Blake and William Basinski – very useful as a tool for stress management and deep relaxation Being unable to commit to a regime of meditation proper for reasons too particular and mundane to detail here, ambient music comes in a very close second best. I don’t wish to give you the wrong idea – Spectre is not “ambient” music by any means, but it does share some of its characteristics. Charles and Gauguet utilise similar techniques of slow development, subtle pulse in place of any formalized beat, poise, frequent rests, and the occasional drops in amplitude to barely there sound… Results in this listener: benign tranquillity. Thanks chaps. For the most part, the players seem to move around each other, as if testing the water. Sometimes the music sounds almost electronic.

Things develop on the second, shorter piece. “Étendue 1” has a careful, acoustic beginning, but at one minute 30 you can very clearly hear the amps kick in. I imagine a remote factory high in the mountains, heard from some distance, in the snow. “Point fantôme” features reedless breathing and sputtering through the instruments’ tubes, mic’ed close and amplified hard. Like trying to get at something that is just out of reach. The musicians generate low lying clouds on “Phonomnèse 2”; with beat frequencies and close notes. Beautiful. “Étendue 2” is the longest track at 12:26 and the players have time to stretch out and get deep. Then raucous. The sound of space stations colliding. The final track “Phonomnèse 3” is suitably quiet and brooding, making a nicely resolved finish. Ably mastered by Giuseppe Ielasi. I’m looking forward to more from this duo and their new label.