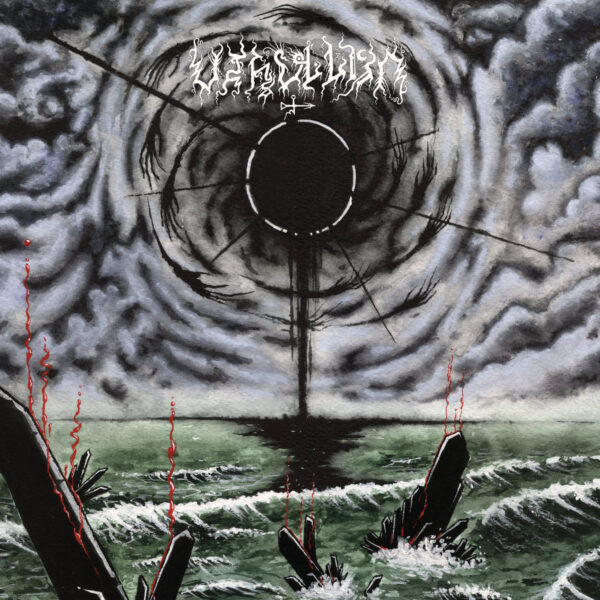 At this time of review information about the publicity-shy Chicago-based BM project Uthullun was hard to come by – I’m not even sure if Uthullun is a solo musician’s project or an ensemble. Uthullun seems to be a new project as “Dirges for the Void” is only the band’s second recording after a self-released EP in 2020. Hearing the album straight through though, I can tell Uthullun are dab hands at playing raw dissonant BM of a very dark and melodic bent. The band’s sound is reminiscent of famed French black metallers Deathspell Omega who might well have had some influence on Uthullun. Unlike DSO though, Uthullun’s style is much, much more straightforward BM without DSO’s esoteric philosophical leanings and coldly remote hard-hitting dense and complex music.

Opening track “Sunless” introduces listeners to Uthullun’s bleak and hopeless worldview, encapsulated in the band’s self-description as a “sunless” BM act, and the music that follows with ghostly wraith-like rasping vocals, the fast-n-flippy synthetic blast-beat percussion and the surprisingly catchy-sounding riffs. Even so, the atmosphere here is as black as sunless black can be, and the music is constant raging fury. Second song “Silence” follows in a similar manner with the coldly reptilian shrieking vocals in battle against the delirious guitar riffing and percussion. Melancholy acoustic guitar is added in the second half of the song and the music becomes as much sorrowful and pitying as it is aggressive. “Penitence” would not be all that different from “Sunless” and “Silence” if it were not for the addition of hammering piano melodies throughout the track that give the song an alienating and experimental cold-space feel.

After four songs Uthullun reckon listeners are ready for some real mind-expanding sunless BM immersion with “Pyre”, a sprawling, droning noisy slow-burner preparing the dark backgrounds to incinerate with black suffocating smoke once the last-beat drumming takes off and leads the music into other, deeper realms of misery and a brief outburst of stuttering, spasmodic lead guitar. Just when you think you have Uthullun’s style sorted out, the band dives back into pop-catchy melodies, teasing stop-start runaway rhythms and some seriously head-banging guitar crunch riffing on “Returning Home”. Closing track “Down the Rivers of Spilled Blood” is the most musically varied and complex song, in an album of very self-contained and individually distinct songs, featuring as it does dense and dark jangle guitar melodies, frenzied drumming, and changes in mood, rhythm and pace so dramatic that the song becomes a mini-medley of BM operatic drama. Wailing lead guitar and weepy acoustic guitar melodies accompany the agonised, drawn-out screaming to a noisy feedback conclusion with out-of-tune Grand Guignol piano plonking that perhaps emphasises the absurdity of the world we live in with all its current global madness and hysteria, and the chaos and unnecessary tragic deaths that have resulted.

The music is presented very smartly and professionally – even the rasping vocals, swathed in reverb, can be very clear – and the level of musicianship and the attention to detail are very good and consistent throughout the recording. At the same time, the performances are very disciplined and restrained even during instrumental jams and lead guitar breaks, and even those moments where the music becomes dramatic never become self-indulgent theatrics. Whoever and whatever Uthullun is or are, the music is the work of an individual or individuals with long familiarity playing BM and I would not be surprised if Uthullun turns out to be a side project connected to several other BM bands. The songs have been written by someone with an ear for good tunes and the lyrics appear to deal with making sense of the chaos, the bleakness and hopelessness of existence by confronting the condition head-on, experiencing it all in full, so that some understanding, no matter how discomforting it will be, might be achieved – and not only achieved but even embraced and celebrated with joy.

Having established their style and presence on the USBM scene with this album, Uthullun will have some high listener expectations riding on their next major recording. While the band’s experimental tendencies are kept in check on “Dirges …”, perhaps on the second album Uthullun might feel more confident to let fly with some really left-field originality and experimentation. They’ve played a bit safe here but on the next record Uthullun will really need to deliver something very individual and creative.