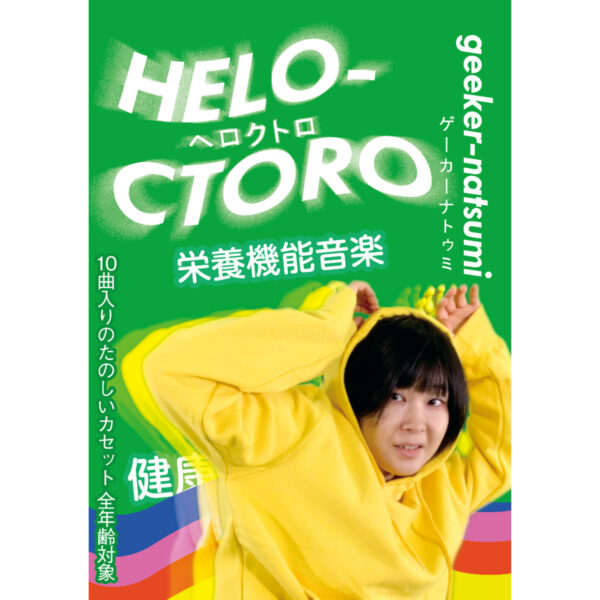 Got a couple of cassettes from a new Japanese micro / online label called Kirigirisu Recordings…they have a line in very limited CDRs and cassettes and the ones that arrived have quite nice hand-folded packages held together by brass paper fasteners. Both arrived here 10th November 2020.

First is Heloctoro (kgr025) by singer and songwriter Geeker-Natsumi, a solo act producing her own brand of highly entertaining synthetic pop with beats. This is only her second full-length release – some three years ago she quit her day job, perhaps intent on spending more time on her art, and put out a record called Retire to Refire to celebrate her freedom. She’s evolved a live act which makes use of the Casiotone keyboard and drum loops to support her singing voice, but on today’s tape she’s opted to work mostly with GarageBand, which is an app which Apple users can instal on their iPhone to turn it into a workstation and recording studio. In line with this decision, Geeker didn’t even use a professional microphone, and instead all the vocals and harmony parts are sung directly into the inbuilt mic of her computer.

The results are pretty irresistible – 10 short and jolly tunes sung in a very unassuming but direct manner, with friendly melodies and rhythms. One of her strengths is to make use of mechanical loops to repeat phrases, and she’s also very sparing with the samples and found tapes, and doesn’t overdo it with the keyboard presets, so that what emerges is both jolly and minimalist. No idea what she’s singing about, of course, but it certainly sounds as though she’s managed to make peace with the modern world. Most of what we hear of contemporary Japanese pop has come to us from the Noble label, most of whose releases are high-powered with fast beats and dense, intricate synth lines played at impossible speeds…I can report that Heloctoro is nothing like that, and is indeed much more approachable. Limited to 100 copies with a full-colour folded insert. 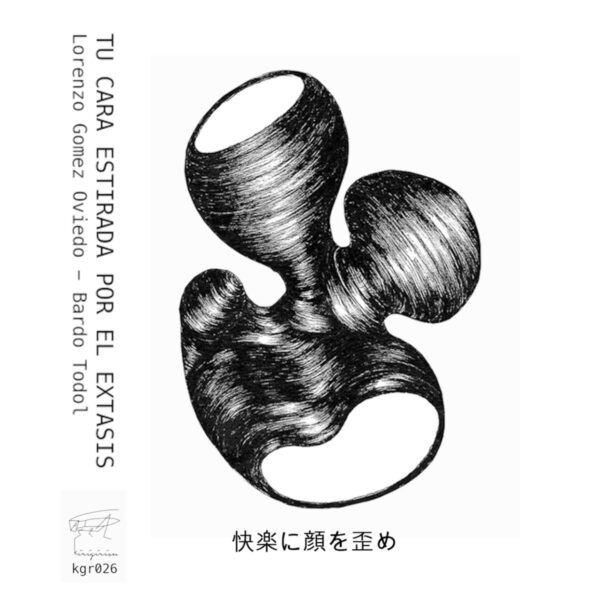 In a completely different vein is the cassette Tu Cara Estirada Por El Extasis (kgr026), made by two Argentinian experimenters Lorenzo Gomez Oviedo and Pablo Picco – the latter appearing here as Bardo Todol (perhaps named in homage to the Tibetan Book of the Dead). Of the two, I get the impression that Oviedo is the more experienced player, and though we never heard his work he’s been active in Mendoza for about 10 years. You might be able to find some of his releases on the Argentinian Adaptador Records label, including the single-track Hebra album from 2020. Most critics tend to evaluate his work in terms of “ambient” music, but he seems to be an entirely serious tape manipulator who is highly aware of the timbres of his various instruments.

Today’s tape – the title translates into English as “your face stretched out by ecstasy”, a lovely thought – came about after Oviedo and Picco corresponded for a bit and found they had shared interests, then they met up in Córdoba where the recording sessions took place, apparently camping out in the woods some place. The foundation for these four tracks is a mix of odd instruments, including violin and harmonium, plus field recordings, vocals, improvised percussion, and tape experimentation. Later, Lorenzo Gomez Oviedo added piano overdubs and some cut-up voice tapes – he may have picked up some Burroughs influence on his travels – and there was further editing and arrangement. Some of the production methods here are fairly common, but this is a magical tape, producing compelling and strange instrumental excursions which are often genuinely surprising and innovative. I think it indicates a powerful creative imagination at work, and a singular view of the world. While some moments on the first track ‘Pianolento’ may appear more like “formal” electro-acoustic experiments of the musique-concrète type, you can’t help but be beguiled by the charms of ‘Susurran Tambien’ with its multiple overdubs of percussion and melodic fragments, which gradually grows into a diverse and diffuse piece of nebulous beauty. The title track includes the voice cut-ups and varispeed effects, and casts a somewhat eerie ambiguous mood, with its lengthening shadows and insistent long tones cutting against the treated voice fragments.

Just about everyone wants to do “surrealism” in sound these days, but these two manage to pull off a convincing stab. Kami John did the cover drawing for this limited 50-copy cassette. Very good.