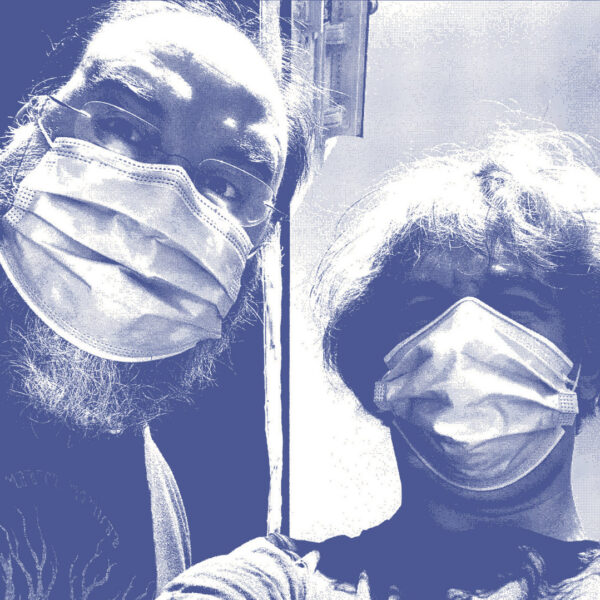 Three items sent from Quentin Rollet who runs the labels Bisou, Rectangle, and Reqords in Paris.

First we have another entry in the informal “lockdown” genre which is rapidly emerging as a thing…Quentin Rollet collaborates with Kim Giani for Mettent Une Ambience de Malade! (REQORDS REQ005 / MK LABEL NO NUMBER), they appear wearing face masks on the cover, the title refers to illness, and they did it all remotely, observing social distancing rules. Matter of fact it wasn’t just remote in distance, but in years; Kim Giani’s drum parts were recorded at a studio in 2015. Rollet added his sax and synth overdubs in 2020, working at home. I like the back-story, if indeed there is one, behind this pairing: “They were preparing a nice spinach soufflet,” it begins, “when they decided to replicate these gestures and moves on their instruments. Suddenly, a mondial lockdown forced them to cook their own dishes, separately.” This might not be the first instance of a “cooking” metaphor applied to improvised music (or any music), but it’s an intriguing idea that the actions of a chef in the kitchen could be exactly translated across to playing a musical instrument. Listeners will already know of Rollet’s prowess and fluidity on the saxophones, but here he exhibits a real talent for noising it up with the Korg monoton; not so much Silver Apples (that famed drum and electronics duo), more like Sun Ra with the addition of a drummer (e.g. John Gilmore on Saturn Research 522). Aye, some cosmic shrieks and rocket-ship effects explode with elan, especially on the final long track which gives you a full 11:47 mins of galactic miasma to savour. This one’s jointly released by Reqords and the drummer’s MK label. Sun-Earth Rock, pour parler vrai! The other two CDs are scheduled to be released as part of book-CD packages in 2021. Melmac is another Quentin Rollet group, appearing here to accompany the voice and recits of Anne-Claire Hello on La Cas Très Inquiétant De Ton Cri (BISOU BIS-016-U). Anne-Claire Hello is a sound poet who’s been plying her trade for about ten years, and though we never heard her work before, titles such Animal Fievre and La Peau de L’eau suggest a certain primitive directness, an impression which is confirmed when you hear her urgent plaints on this disc. Her work represents, we are told, a struggle between literary texts and the plain facts of physical living, starting with the human body. Who better to accompany this feral untamed spirit than Melmac, whose grisly guitar music we last heard on the LP Un Chien Vivant Vaut Mieux qu’un Lion Mort / Un Lion Mort Vaut Mieux qu’un Chien Vivant released on the Ronda label, which is owned and operated by the two guitarists in this band, Nicolas and Luc Reverter. Joined by drummer J-Yves Davillers, plus the sax and electronics work of Rollet, Melmac mostly play a form of deranged industrial noise-rock, chugging along in manic sympathy with the exasperated gasps of Mlle. Hello. The first three tracks are exhausting, but cathartic; after that we have 8:31 mins of ‘Zero’, where the tempo and the musical mode is slightly more subdued, though still tinged with incipient menace; the poet’s recit here reminds me of records by Colette Magny, with the same mix of emotional heartache and sympathy for the plight of the human race. Even more intriguing is ‘Cette Seconde’, where the poet might be warning us of imminent catastrophe unless action is taken instantly (unsure, as everything is in French), to which end her voice is fed through a distortion effect as if she’s telephoning in a report from the site of a disaster. The band turn in brilliantly alienating abstract drawls, worthy of Chrome, limning a desolate vista of the mind. La Chute De L’Ange (BISOU BIS-013-U) takes its title from a Max Ernst painting, itself an oblique and modernist take on an art-historical religious theme, which I mention as I suspect the creators involved in this record are themselves not averse to supping at the surrealist punch-bowl. Can’t find out much about this one as the book hasn’t appeared at time of writing (Jan 2021), but those involved are Jérôme Lorichon, Ghédalia Tazartès, and Quentin Rollet. Judging by cover photos, they performed this single 35:28 piece inside a church or cathedral, and turn in a very sombre and respectful piece of troubled meditation. Those who enjoy the wilder free-association side of Tazartès and his vocal acrobatics may be surprised by how restrained he is on this occasion, offering only tremulous whimpers as of a stricken man coming to realise how small and insignificant he is in the face of God. Lorichon twists dials on a mixing desk to provide a rich buffet of uncanny sounds, and Rollet sighs with many a puffy breath through the bell of his saxophone, an instrument which walks around with the humility of a cowled monk with head bowed.