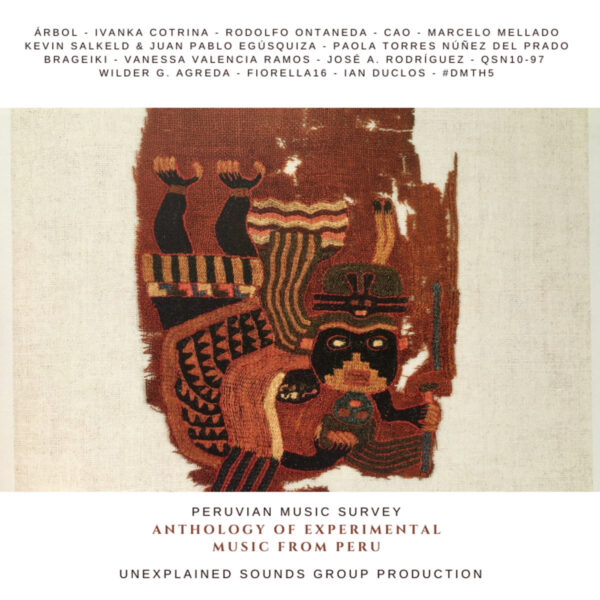 With Peru increasingly coming under the international spotlight as a source of avantgarde and experimental music, thanks in large part to the efforts of Luis Alvarado’s Buh Records label in documenting and archiving the music of Peru’s past pioneers and current performers and making it available to outsiders, it really was a matter of when, not if, someone else took an interest in the current experimental scene in the country – and none other than Raffaele Pezzella, always welcome here at TSP with his label Unexplained Sounds Group’s on-going compilation series focusing on experimental music in countries outside the First World, has released his selection of current Peruvian experimental artists working in styles as varied as drone, noise, electroacoustic, folk, musique concrete and electronics-based styles. The criterion for USG’s anthology seems to be promoting those Peruvian musicians who are not simply content to combine European avantgarde / experimental music trends with music or musical trends in Peru but who push the extremes of their genres in directions and into sonic territories no-one else has dared to go in. All the music appearing on this recording was curated by Pezzella with invaluable assistance from Jorge Castro Ortega (who also wrote the blurb for the anthology on USG’s Bandcamp page) and Diego Faucheux, himself a sound artist with the project Árbol.

As it turns out Árbol leads off with the longest track on the album, the epic 12-minute drone noise stunner “Region perpleja” that carves up the space between your ears with choppy staccato precision and booming drone power and leaves it vulnerable to what will follow. From here on the music zips from one genre to another to yet another. Ivanka Cotrina’s atmospheric folk piece “Yachag” gives listeners a brief refreshing pause between Árbol’s contribution and another sound installation operator, Rodolfo Ontaneda, who delivers a mighty droning noise mini-soundtrack-styled work in “Rio de sangre hirviendo”. Marcelo Mellado turns out a haunting work of electronic melody loops in “Viento en Circulos” to be followed by an equally affecting and eerie drone ambient piece in “Venucia (ciudad flotante)” from Kevin Salkeld and Juan Pablo Egúsquiza. Spoken-word field recordings are the focus of Vanessa Valencia Ramos’ short piece “Plantas Medicinales Contra el Patriarcado”. Qsn10-97’s “Sh sh” is anything but quiet in its cutting whirlwind howl that metamorphoses into a nonchalant and cheery organ melody traipsing into another howling storm. Wilder Gonzales Agreda’s “Zuckerzeit” is a droll dinky little ditty for toy robots and the final track by #DMTh5 combines flute, floaty shrill electronic tones and spoken-word recordings into a spaced-out mindfuck mood piece that will leave listeners uncomfortably suspended in an odd zone between this universe and the next.

Much of the music has real passion and a raw quality, and a sense of being right on the edge of whatever genre or genres it’s based on or blends. With the exception of one or two tracks and those tracks that feature spoken-word or other field recordings, the music here resembles very little that will be familiar to most listeners. I find the best pieces on this anthology are those ambient works from Marcelo Mellado and the duo of Salkeld and Egúsquiza though the other weird electronic pieces from Wilder Gonzales Agreda and Fiorella16 (this one too short for my liking) are not far off. On the whole this anthology is an outstanding collection of music from what must be a very eclectic selection of artists who represent a small snapshot of the current experimental music scene in Peru. The freshness and vibrant energy of the music on this compilation are suggestive of a rich, complex (and complicated) culture, tradition and history that provide inspiration and material for these artists and their compatriots in Peru to draw and build upon.