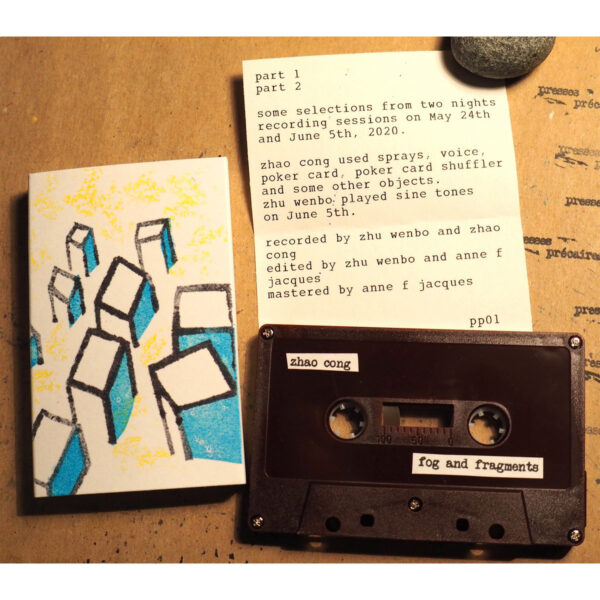 Got a couple of new cassette tapes from Anne-F Jacques in Montreal. She is the creative mind behind the label Crustacés Tapes and now appears to have a new venture, Presses Précaires, whose motto is “obscure and luminous sounds on magnetic tape”. The tapes are still very limited and still have loveable hand-made covers, and continue to feature work from the extreme ends of this mode of what-is-it, puzzling sound art we love so well.

Zhao Cong made Fog and Fragments (pp01) in 2020, with the help of Zhu Wenbo. Zhao Cong was born in Beijing. While she has a sideline in song-based and rock group work, her main point of interest is her solo set, which she’s been developing since 2016 – using unexpected objects, motors, lights, pieces of paper, cardboard tubes, feedback and contact mics to produce her singular take on improvised music. Some of her efforts have been represented on releases from Hitorri, Meenna, and Zoomin’ Night. On this particular recording, made over two nights, she did it with playing cards and a shuffling device used for such cards, plus her own voice, and “sprays” – which to my mind might mean anything from an aerosol can to some form of insect repellent. Strange, uncertain and unfamiliar sounds gently accumulate on the tape, of which the local ambience (including room sound and traffic) is evidently reckoned as part of the set as much as the performance.

Collaborator Zhu Wenbo is here somewhere, adding sine tones played on her smartphone, but she’s doing it from some distance away. She also did the editing of the tapes, but working to instructions from Zhao Cong. These instructions seem to have been number-based, and a certain amount of random influence was not only permitted, but actively encouraged. Then Anne-F came in at the end, and “more silence” came out. Ambient sound, numbers, chance elements, silence – how much more Cagean could it be? Given all the circumstances, you might be surprised that this tape is not only very “eventful”, but also a compelling listen. The sounds are strange and unexpected, yet there is no intent to shock, but rather beguile the listener with a new angle on the familiar. It’s quite some distance from “normal” improvisation, and has no discernible musical component in the conventional sense. Wonderful stuff. 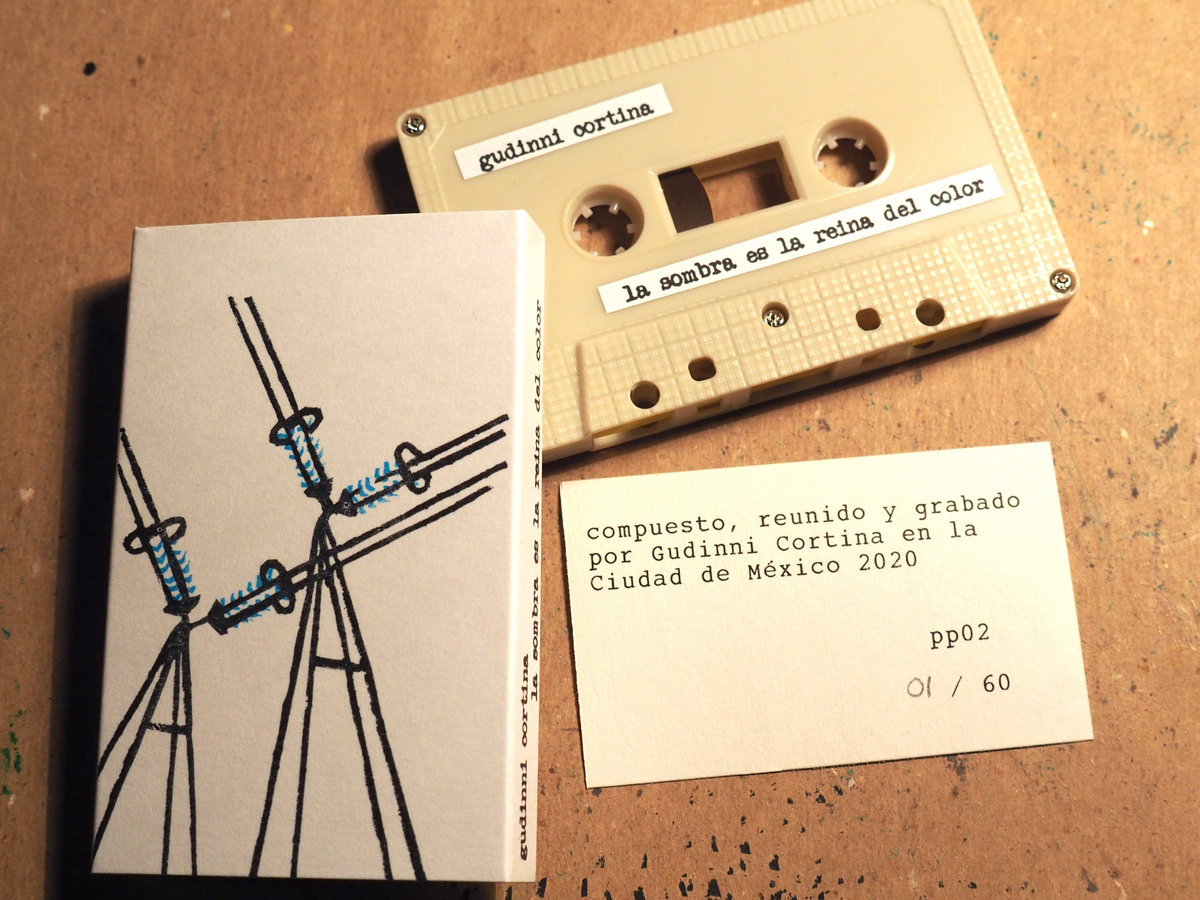 Gudinni Cortina from Mexico City is a sound artist who we noted as a guest player on the fine SQID record from Mikroton. Although he made no actual sound on that record, his photographs of the locations used by Burkhard Stangl, Mario de Vega, Angélica Castelló and Attila Faravelli were an integral part of that 2015 double CD set. His interest is in “transformation” of the environment, and he does it with sound, photography, and installations.

On the tape La Sombra es la Reina del Color (pp02), he’s aiming at something quite specific and personal to him, to do with his understanding of “umbra”, a shadow that’s so dark that it completely blocks all light from entering it. Apparently there’s no English term equivalent to this ultra-occluded concept, presumably one that strikes mortal terror into the heart of any true Mexican. Choosing the time of day just so, he only recorded audio events at sunset or dusk for this project, later adding something described here as “sinusoidal tones” to produce the layering effect he wanted. These experiments seem to have worked best on ‘Domo’ on Side A, a confusing and uncertain blend that creates a palpable sense of unease with its twilight shadows and vague, murmuring crowd sounds. At least the transformation he’s interested in is more or less discernible, whereas ‘Glamour Feerico’ is less convincing – all I could find was an unchanged document of what sounds like a sawmill and the voices of workmen yabbering away.

‘Banco de Zinc’ puts us firmly in the realms of the abstract – if there were any field recordings involved, they’ve been thoroughly processed out of existence, as surely as removing all the blood from a corpse, leaving us with this bizarre anaemic dried-out thing. Gudinni Cortina clearly doesn’t believe in over-doing things, and his audio transformations are subtle and almost indiscernible; it’s to his credit that he makes a good effort to depict something so personal and insubstantial, and one day he will succeed in chasing down that elusive “umbra” and nailing it to the wall.