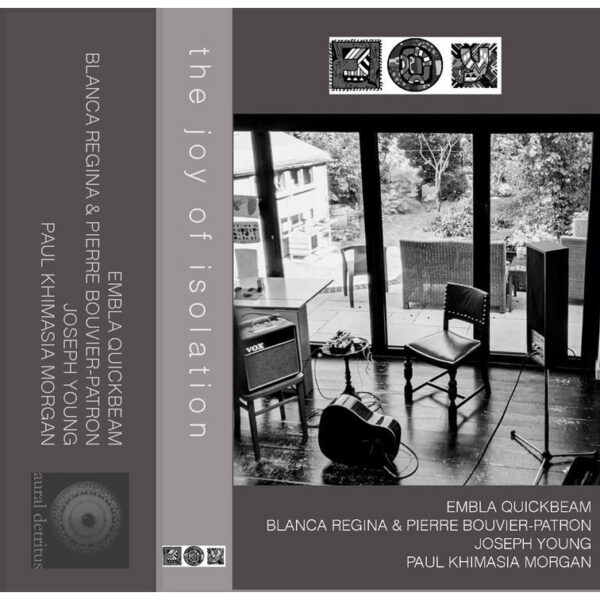 The Joy Of Isolation (audet008) is another Aural Detritus project associated with the Ceramic House of Kay Aplin and Joseph Young in Brighton; we previously heard Landscape : Islands in 2018, a showcase for many fine talents which effaced the differences between free improvisation and field recordings. Not unrelated was the 2012 album GoldDust, a collection that captured the warmth of this communal and collaborative setting. Today though, we have neither that warmth, nor the bustling liveliness documented on Landscape: Islands, as COVID-19 has smitten the world and everyone is locked down in isolation. The brief given to all the sound artists for this 2020 project was to stay at home, use what they had, and make a solitary recording that reflected this isolation. To further underscore the poignancy of the situation, the music was intended for a show called Joy, hence the wry title of this cassette.

Embla Quickbeam (real name Rowan Forestier) certainly conveys the unhappiness of solitude on her ‘To The Centre’, a performance which seems to make use of any object she can lay her hands on and turn into sound art. A forlorn mood is set up instantly, one she’s almost afraid to disrupt, and she meanders around in a little eddy of sadness. Blanca Regina teams up with Pierre Bouvier-Patron on ‘Water’, creating a puzzling set which may involve unusual stringed instruments in strange tunings, plus other foreign sounds. Like Embla, they too seem drawn into a vortex of self-absorbed contemplation that might not be too healthy for the mind; however, given the nature of lockdown, it’s 100% accurate, and might just be a very good audio depiction of what we’re all going through as we stay at home surrounded by our four walls, which seem to close in on us a little more every day. Both Blanca and Pierre are mainly visual artists, involved in cinema and multi-media; Regina did a great job as part of the quartet that interpreted the cinema of Murnau, on The Phantom Sunrise.

On Side B, we have Joseph Young with ‘Splendid’, a very odd work which might be described on one level as a collage piece using snippets of spoken word, music, and disco beats; as it unspools, it sketches out a diagram for a drum’n’bass track that never was, or the ghost of such a track. You could read that as the forlorn reflection of better times when people were allowed to socialise in clubs, but I prefer to hear ‘Splendid’ as the sound of memory itself starting to decay. These miserable fragments of a former life are all we have left, floating before us in the ether, reminding us of a life that has vanished (temporarily, we hope). Ironically, the sampled spoken phrase here completes as “splendid isolation”, which is doubly poignant given the downbeat, dejected tone of this gloomer. Painful, but very honest.

On ‘Imaginary Duet’ we hear label owner Paul Khimasia Morgan, working I think with degraded and distorted tapes, perhaps improvisations of his own or other people, and setting them into enforced dialogues with one another. (I wish there were something describing the processes behind each piece in the notes.) Formally, a very interesting experiment is going down here, resulting in perhaps the most challenging and layered piece on the whole tape. I like the way that the instrumental voices refuse to quit, and keep trying to make themselves heard, even as their very existence is evidently quite fragile and they are only just clinging on to life. Desolate, attenuated, wretched…you bet!

The instructions given to the artists for this project are reproduced here in the cassette, just five simple lines of direction which have evidently generated much productivity among these four. Tellingly, the last line is “visualize an audience”, which is extremely significant not just in the context of this release, but for the whole future of performed music in the UK: it’s currently under a double threat, not just from COVID (closed venues, cancelled tours) but also from Brexit (changes to visa rules restricting travel and blocking European musicians). No wonder any sentient musician wants to “visualize an audience” for their work just now. The players here on this tape don’t quite manage this visualisation; mostly what they do is weep for the lack of an audience, settle for talking to themselves, and dream of what it might be like if things ever got back to the way they used to be. From 27th November 2020.