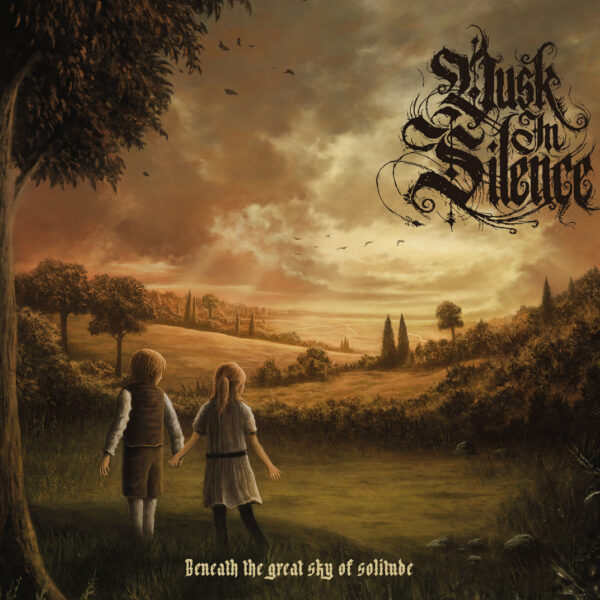 You would never know from looking at the lavish artwork on the front cover of this album, or from hearing the spiky jangly music it encloses, that Dusk in Silence hails from Blitar, a city in southeast Java, or that Aghy Purakusuma, the fellow who did the cover, is based in Bandung in western Java. Dusk in Silence is a solo post-BM project helmed by Bangoen who has been active in the Indonesian metal underground at least since 2011 when he joined Blitar-based death metal band Inverted on drumming duties and then later branched out onto various solo metal projects. With that very respectable CV, let’s sally forth into reviewing Dusk in Silence’s debut full-length recording.

The music is clear sparkling melodic black metal influenced by atmospheric BM and depressive BM. The guitars have a great sound: shrill and clear-toned with a warm radiant, almost golden feel in their tremolo chords. The drums are thin and clippy in sound but very tight and fast. The raspy throaty vocals have to do battle with the liquid music nearly all the way through on most songs, dependent as they are on the lyrics (mostly in English) to drive them. In every song the instruments are well coordinated and work as one, and the result is very strong driving riffs filled with drama and feelings ranging from melancholy to yearning for connection with nature and the universe, and sorrow. Lead guitar solos, where they appear, have an epic quality and ringing resonant tones that at times appear triumphant or heroic.

Admittedly the songs don’t sound all that different from each other though as they follow a narrative arc in their lyrics, expressing a weariness with the world and its limitations and imperfections, and taking a path into another world, the lack of individuality among the various tracks perhaps can be overlooked. Even though the lyrics can seem depressing and suicidal from one angle, the music appears nearly always uplifting, positive and radiant, and only the very last track “Dekap”, the only one written in Bangoen’s native language, actually expresses sadness in its music, and even then only as an instrumental introduction. Of the six songs on offer, the one that stands out most with its key changes, dramatic surging music, twangy guitar chords in parts and emotional range is “An Ode to Eternity”.

With this solid first release, I don’t see that Dusk in Silence will be languishing in solitude for much longer: the songs are well written and their performance is robust. The music has a very immersive hypnotic effect with the emotions and moods it expresses, and its epic triumphal nature can carry listeners a long, long way into its golden radiance. In the years to come, this album is sure to be a slow burning cult classic of its kind.