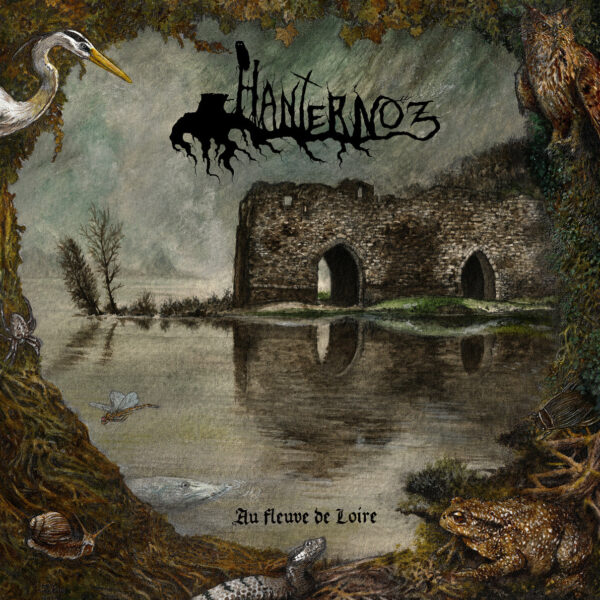 Formed in 2006, this Breton folk / black metal project revolves around core members Arzh Hyvermor and Sparda who also run the label Antiq Records. Other musicians have joined Hanternoz over the years and been seen off by the duo so I shudder to think what hard and exacting employers Hyvermor and Sparda may be, especially as Hyvermor is also a member of another French black metal band Véhémence whose most recent album “Par le sang versé” ended up on a lot of people’s top ten BM album lists back in 2019. This and the duo’s involvement in other bands as individuals say much about what we can expect from Hanternoz’s second album, coming out some 13 years after their first album and with two EPs and two split recordings in-between.

The album is a tribute to the mighty Loire River, the longest river in France, and its role in French agriculture, industry and culture through the ages, and ultimately in the formation of French identity. The river has a warming and tempering effect on the climate of inland France with the result that it has long drawn people to settle along its banks and the Loire River region is the country’s major wine-growing area. “Au Fleuve …” attempts to portray the Loire from as many angles as possible throughout its history, including Hyvermor’s childhood memories of growing up near the river and also from an environmental viewpoint. Interestingly the album notes that many people have drowned in the river over the ages: in past centuries of warfare and during the French Revolution, the Loire was used as an execution ground / mass grave.

With such ambitions, “Au Fleuve …” can be expected to be an expansive and meandering work, much like its subject. The Hanternoz musicians themselves play guitar, bass, flutes and hurdy-gurdy, and several guest musicians assist on guitar, percussion and bagpipes on most songs, and on choral duties on the first major track “À Cul de Grève”. This track and its immediate follow-up “Ce Que le Fleuve à Pris” establish Hantenoz’s style as epic folk / melodic BM with a fairly clean though still sharp sound and a light touch so that all instruments can be heard clearly and none dominates over the others. Lead vocals are usually harsh and raspy but clean vocals dominate the choral singing. Individual songs may be full of surprises – “Ce Que le Fleuve à Pris” alone incorporates folk, aggressive BM and melodic hard rock or progressive rock elements, and several changes of mood, so much so that describing it is hard. The songs that follow include even more melodic non-BM elements to the point where perhaps “Au Fleuve …” is more a full-fledged avant-rock or progressive rock album with folk and BM elements than the other way round. Even space ambient music gets a look in (“Vieille Nasse Crevée”) and by the time we reach the last track the musical journey has chewed through atmospheric blues, post-BM, thrash metal and spoken-word monologues.

Most songs are long wandering affairs with unexpected detours and twists that introduce new elements almost right up to their end. They also have a ragged presentation, as if they were quickly put together in the studio and put straight onto the album with little editing. While this means the songs might not seem self-contained and might need more polish and maybe some pruning, at the same time this approach to writing and performing songs as though they were a continuous tapestry helps give the album the rough, almost improvisatory edge it needs. Listeners can’t possibly hope to absorb everything the album presents on first, second or even tenth hearing … this is a recording that sprawls over so many musical genres and elements, and over French history and culture. At the same time the album does have a distinctive musical identity from this eclectic selection of sonic elements and melodies. I’m certain that however the songs were composed and recorded while they were performed, the way in which all of this was done was intended. The songs don’t appear to be bloated despite their length and they all ooze heartfelt passion and soul even in their slower parts.

The album might not make a lot of top ten BM album lists for 2021 but I’d say in the years to come its distinctive features will be appreciated more and more, and it may eventually become a cult album of epic folk black metal.