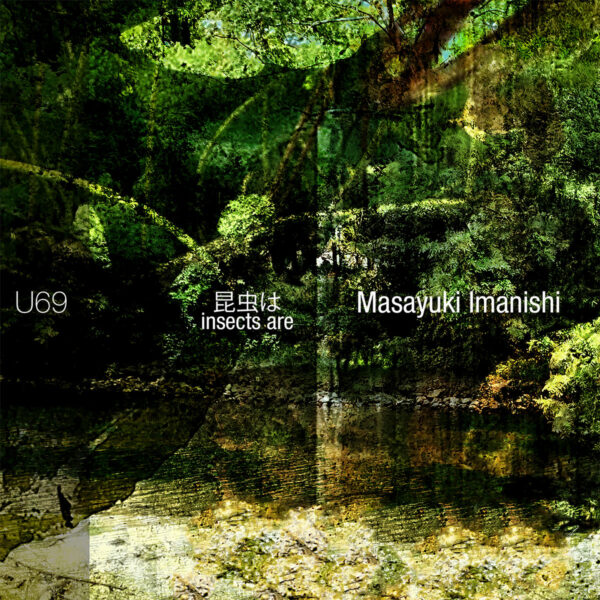 Burying your head in this rich and lush 40-minute soundscape of insect activity and the background noises of other creatures and Nature generally, you’d think you’d been transported to a nature reserve or a wilderness area where access is only via a mud track or walkways made by park rangers, or even a magical world hidden behind forest trees or beneath the ground you walk upon. As it turns out, all the sounds and noises here were recorded in parks in Osaka, the centre of Japan’s second largest metropolitan area with over 19 million people, by sound artist Masayuki Imanishi using a PCM recorder, microphone and tape recorder. Two of these parks, Nakanoshima Park and Sakuranomiya Park, are close to the city centre and run along riverbanks, and the sounds of water and waterfowl have been captured as well.

Perhaps the astonishing aspect of this work is that even though the parks where Imanishi made his recordings are right in the centre of Osaka, the huge majority of sounds appear natural and not man-made, though at the beginning of the work you can hear trains and typical urban traffic noises. Very little editing seems to have been done. Past its early moments, the noises of the urban environment merge completely into the sonic ambience of the park environments where the insects and other park fauna dominate. The insect noises can be very eerie and rhythmic. The sonic tapestry unwinds in such a way as to draw listeners deep into the worlds held in its threads, led by the crickets, cicadas and other chirping and humming insects. Bird noises and flutter later join the insect chorus but the two sets of animals never fight for dominance; rather their sounds complement one another and merge into a soundtrack of a universe that on the surface appears so familiar to us (urban park and forest) as to be banal yet at the same time hidden and secret when we start to investigate its depths. At some point in the recording (probably near the 30th minute), the insect drones start to resemble tiny UFOs simultaneously launching and landing in distant parts of the riverine parklands: the rich sounds that develop and appear to become ever more complex and spiralling into a point beyond infinity may well be the best part of this work.

Imanishi’s artistry is most apparent in the way he has structured this work so that it draws listeners deep into the micro-universes of Osaka’s urban parklands to reveal different layers of animal and plant life, each with their separate sounds yet all joining in a harmonious chorus of noise and drone that is dynamic and ever changing. These tiny worlds have always been present in Osaka, and perhaps in other cities around the world, if we were to pause in our daily routines and open our senses to the hidden universes around us. As the title of the recording says, insects are: they have been and always will be, if we listen to them and accept and respect them for what they are.