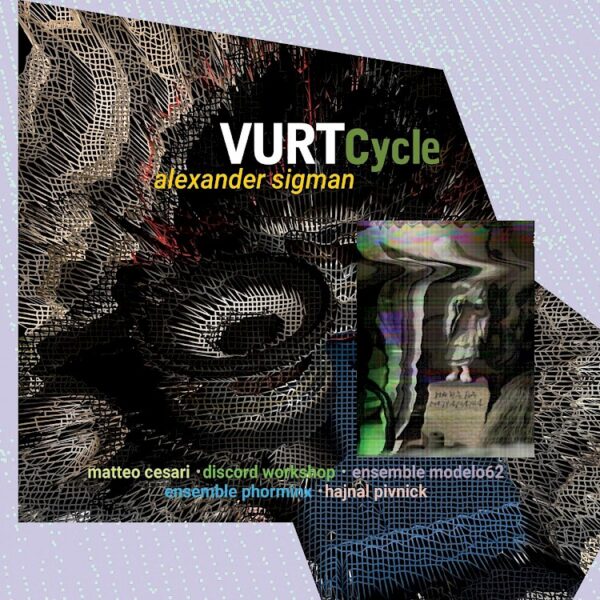 We’ve been enjoying the music of American composer Alexander Sigman since 2011, when we heard his Nominal / Noumenal for Carrier Records and later his fcremap for New Focus Recordings. To say his works are “complex” would be an understatement, and his musical ambitions are often too lofty for me to grasp, but one underlying trend is his interest in processing external source materials, quite often non-musical in nature, and trying to engineer them into musical compositions; on fcremap, for instance, it was about transforming the work of a Korean animator, specifically related video and audio data, into a musical score.

On today’s record VURT Cycle (NEW FOCUS RECORDINGS fcr257), he’s doing it with the science fiction writing of Jeff Noon, acclaimed UK author, whose book Vurt was his debut novel and appeared in 1993 to great success. A reprint edition added some more short stories about life in this dystopian other world. In using this book as his framework, Sigman isn’t doing anything so prosaic as telling a story, although it might be that Vurt (which I never read) isn’t so much about narrative as it is about exploring another universe (like Dune). Instead, Sigman is attempting to “map paradigms” and adhere to “recurring principles” across the five movements of this VURT Cycle, drawing inspirations from concepts and images found in the book – and other related sources too.

It gets even more intellectually convoluted, as the music also pays homage to the Manchester New Wave scene at one point, in recognition of Noon’s background in Manchester punk (he was active musically before he wrote his first book); and one movement, ‘Le Jardin Des Supplices’, is an explicit reference to The Torture Garden, that decadent 1899 novel by Mirbeau which was a vicious attack on the hypocrisy of French politics, and also an inspiration for Jeff Noon. Sigman works his way through all of these layered, cross-referential compositions with the help of very gifted solo players – Hajnal Pivnick on violin, Matteo Cesari on bass flute, plus various small Ensembles, with which he plays his live electronics set-up. Read the extensive notes, and you’ll see that the configurations and relationships of these Ensembles have been carefully planned and arranged too, all in the service of the literary-musical ideas he’s trying to express. I’m also interested to learn that the five recordings are all separated by space and time, and the whole work took from 2012 to 2019 to complete, indicating the long-term commitment that the composer has made with this project.

As to the actual music, it’s quite a testing listen – many discordancies, harsh harmonics, and some of the individual performances (especially Pivnick’s violin) verge on the grating with their repetitive, astringent tone. All the moods thus created are extremely alienating, depicting the ravages of an unpleasant future world with merciless detail, and doing so at a very slow pace. The triumph of Sigman has been to bring together all of these complex yet related ideas, and form them into coherent musical statements. Not an easy listen, but there’s a lot of content and ideas to digest. From 26th July 2020.