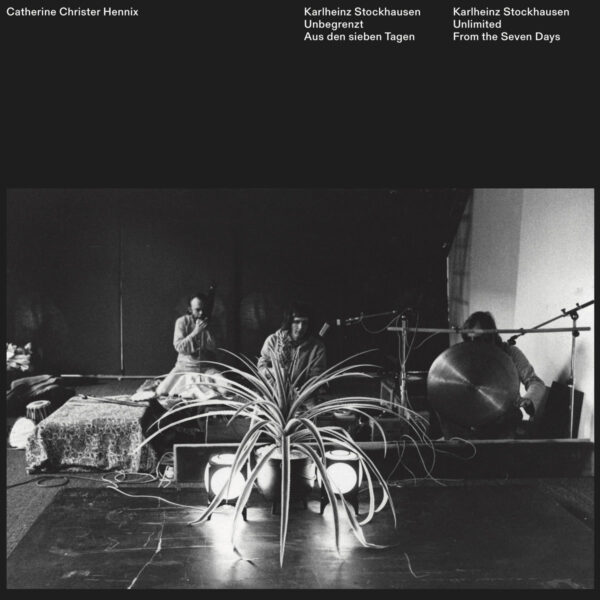 Another excellent archival release presenting the work of Swedish composer Catherine Christer Hennix. The record Unbegrenzt (BF-011 / EE07) is co-released by Blank Forms Editions and Empty Editions, and contains a 1974 recording of this Stockhausen composition which she made with Hans Isgren. It’s the latest release in a series of publications designed to bring the work of this overlooked composer into the spotlight; we, and many others, were surprised and delighted by Selected Early Keyboard works which emerged in 2018, and also by Selections from 100 Models of Hegikan Roku from 2019, which introduced us to her group The Deontic Miracle. From these, we learned more about Hennix and her musical background, which embraced free jazz, free improvisation, and the Minimalism of La Monte Young, under whom she studied for a time; and her interest in Just Intonation, mathematics, and performances of long-form music with her ensembles. Those recordings were great, although the influences were clear, and it was possible to slot them into a historical continuum with the work of other Minimalists (especially Terry Riley). Today’s record is quite different though, and arguably a lot more interesting; the music is gorgeous to listen to, a superb combination of low-key electronics and percussion, and 51 minutes of exploratory bliss await the listener.

I have recently read a little bit about Stockhausen’s famed Aus Den Sieben Tagen, from which ‘Unbegrenzt’ (also called Illimite) is excerpted. Alex Ross, the New Yorker music critic, wrote his survey of 20th century modernism called The Rest Is Noise; he likes to contextualise everything, put the spotlight on personalities and characters, seeing the growth of culture as a succession of global influences and cross-currents. He observes a European trend towards aleatory music at the end of the 1960s, and proposed that Stockhausen was part of the general flow. 1 It’s often noted that he wrote the text scores for Aus Den Sieben Tagen during the May 1968 riots in Paris, and I’m sure an essay is waiting to be written that joins the dots between this music and Situationism, but the point to stress is that the German maestro was reaching towards some notion of “total freedom” in music. At any rate, he believed he was; there is no conventional score for the Seven Days, just vague and poetic instructions to the musicians, intended to liberate them from preconceived notions of what classical performance might be. On the canonical 1969 recordings 2, the jazz players Michel Portal and J-F Jenny Clark were in the Ensemble, which might have been thought to inject some spontaneity, although the results still end up formal and stiff. It’s debatable how much “freedom” the musicians really had; there are anecdotal suggestions that Stockhausen still determined a lot of the music’s direction, and that he couldn’t completely relinquish control. This impression is not dispelled when you read a short passage in Edwin Prevost’s book Minute Particulars (2004), where the AMM drummer singles out Sieben Tagen as a rare exception in classical modernism that allowed participation and input from musicians, but suggests that the spontaneity was undercut by the composer himself. He wanted to set them free, but it was freedom on his own terms, based on his own understanding of what intuitive music was.

Hennix was even less equivocal on the matter, apparently. For one thing, she had already played with a number of free jazz musicians in the clubs in Stockholm, and heard great free jazz from mavericks such as Eric Dolphy, Cecil Taylor, and others; she couldn’t square Stockhausen’s rather dry ideas about improvisation with what she knew in her heart to be the truth. Further, she aligned this text-based way of working with that of La Monte Young, who had been doing similar works under the Fluxus influence, and creating his own musical events thereby. Hennix recognised Sieben Tagen as an extension of that, but wanted to perform it her own way. She also went back to her mathematical roots, turning once again to Brouwer’s Lattice, an algebraic work which helped her form her own unique vision of intuition in music. All of this means she is explicitly countering Stockhausen’s vision, and challenging the canonical 1969 recordings, with her own alternative reading of the instruction. Given that the instruction itself is fairly open-ended – it refers to “an infinite amount of time and space” – this seems to be both valid and legitimate. Unlike the DG recordings, which keep harking back to academic composerly forms and conservatory training, this 1974 recording is genuinely spontaneous, far more successful in its pursuit of the “infinite”. Yet it’s also ended up in perfect harmony, and balance; it’s not chaotic, but intense, focused, the product of concentration and a high degree of assurance on the part of the players. Not only are the sounds very pleasing – computer noise, bowed percussion, muffled mumbling voices – it take the listener to a very definite place, has a certain centre, and a certain weight.

I think that somehow this release proves something about how it can be possible and very productive for an artist to bring their own imagination to personalise and interpret these text scores, and inhabit the work; further, doing so in a way which honours the true intentions of Stockhausen, without falling under his irresistible influence. If this is half right, it makes us wonder why there haven’t been more realisations of Sieben Tagen by more creators, and ones that exhibit further instances of variety and imagination. Arrived 18 July 2020.